Finally!  The testing has started!  We’re getting data!

Last week, I got to complete a round of testing.  Though this didn’t involve the fNIRS setup (lasers), it did utilize an EEG, or electroencephalography (pronounced with a sneeze).

The EEG that we have involves sensors in little watch battery size capsules that have small electrodes touching the scalp, and they are attached to a hair net – like cap.  The cap is then cinched onto my head.  The senors record electrical impulses that the brain gives off, and transfer that data into a software package on a computer.

To get a good connection between my scalp and the electrodes inside the sensors, Terry used a solution made up of potassium chloride, water, and baby shampoo, you heard right…BABY SHAMPOO.  For the rest of the day, I smelled like a baby!  (…all in the name of science, right?)

The image below is the EEG setup using the pitch – roll seat and a baby shampoo smelling guinea pig…me! 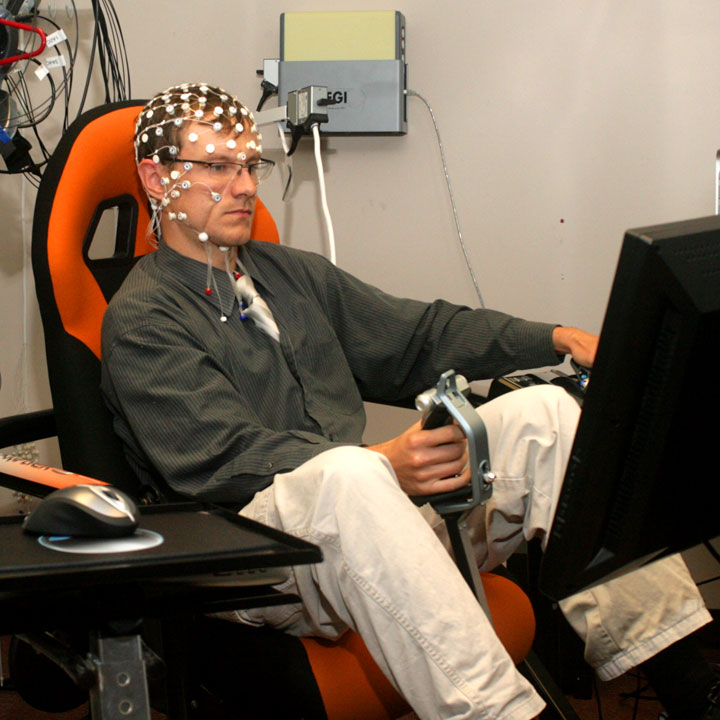 The test was a series of smaller tasks that involved resting, finger tapping, word association, flight of an ultralight aircraft in the simulator, and a response exercise.

Resting was the same as with the fNIRS test from the previous post.  Though, this time instead of thinking of floating on the ISS, I was thinking of cruising in an F104 Starfighter (Kelly Johnson, look him up).

Yes, believe it or not, that is relaxing to me.

Then came the finger tapping test that I completed before, using the fNIRS.

After that, word association.  Again, same as the previous exercise using the fNIRS.

Then came some FUN!  We fired up the simulator and the seat.  I was tasked with flying an ultralight through a series of gates.  This wasn’t that intense of a task considering the simulated ultralight doesn’t need crisp control actions.  It’s what I call “lazy flying.”  Nice and slow flying with subdued control inputs.

There were 3 gates that varied in elevation and required me to increase and decrease power using the throttle.  That was a fun test, primarily because it not only supplied data from a test subject that was flying using the simulator, but also because the gates were located at Edwards Air Force Base!

Angela tells me that the task was taken from a series or tests that are used to test cognition as well as other psychological issues.  The task that I’ll be talking about is #3 (TOVA) in the list in the link:
http://pebl.sourceforge.net/battery.html
So, I was tasked with a test that recorded my response to a series of black squares that appeared on the screen of pitch – roll seat.  I was to look at the screen and tap the space bar every time a small black square appeared in the top half of a big white square.  I was NOT supposed to tap the space bar when the small black square appeared in the bottom half of the big white square.  Here’s the kicker:  I had to watch for the little, small, blinking, and really annoying black square for 20+ minutes!!  Yes, 20+ minutes…that’s 1200+ seconds, or almost half an hour just watching, waiting, tapping, NOT tapping, CONCENTRATING.

I think that this was a better test then all of the others.  I was really forced to concentrate for this task, making sure that I don’t tap the key, that I tap the key.  Sounds simple, right?  Ha!  Don’t forget about your eyes, your muscles, your body.  I was sitting in one position for 20+ minutes looking at one area in my field – of – view, trying not to blink when the squares appeared, and blinking when I just pressed or not pressed the key.  Awesome test, but boy was that ANNOYING.  But nothing gets annoying more than this:  I MISSED ONE!  I pressed the key when I should not have!!  (*..insert sigh here*).

All in all, it was great to get the first official test knocked out.  I hope that Angela can get some good data from all those tasks.

Below is a pic I took right after the test…remember…I smelled like baby shampoo when i took this pic!  I’d like to thank Angela and Terry for making me look like this for the rest of the day… 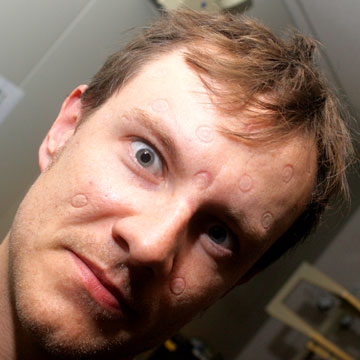