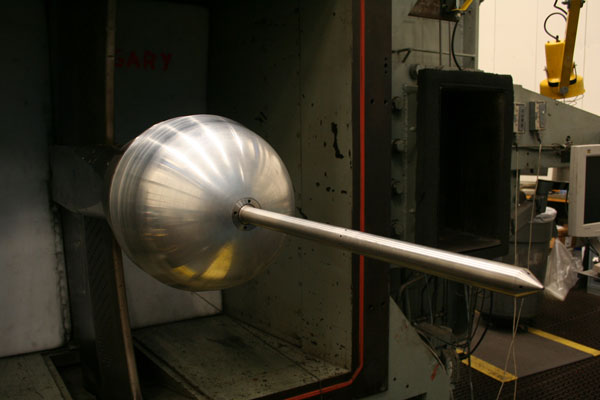 There’s a running joke around NASA that the mostimportant thing about rocket travel is that “the pointy end goes up.” Thatseems simple enough—and that’s what we expect Ares I-X to do today. But haveyou ever wondered what is ON the pointy end of the rocket? You might be surprised.

Rather than an actual point or smooth, aerodynamic surface, the very top of theAres I-X rocket is capped by an instrument called the “five-hole probe.” As itsname suggests, this instrument has five holes on its conical point, which takein air during flight. The probe is actually a set of sensors that collectsaerodynamic data, including total air pressure, static air pressure, angle ofattack, and other measures that verify how well the vehicle is beingcontrolled—one of the primary objectives of the test.

Because of the importance of this sensor, the five-hole probe is keptunder a protective cover, which will be removed by someone standing on top ofthe launch gantry and pulling it off with a lanyard. The cover will be removedabout 45 to 50 minutes before launch time. Once the cover is off, the five-holeprobe will be ready to slice through the air and make its contribution to theflight test…pointy end up, of course.

11 thoughts on “The Pointy End of the Rocket”