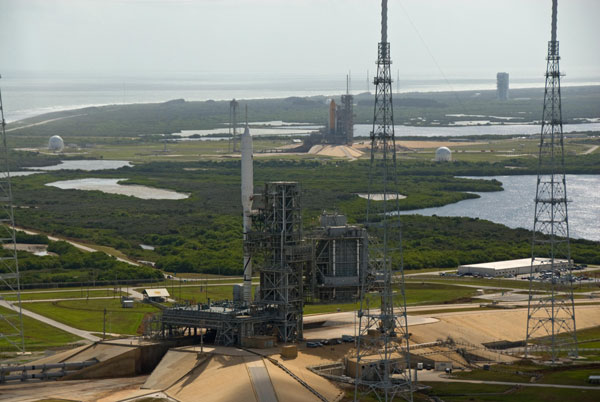 The launch of theAres I-X flight test has been more than three years in the making. Ever sinceNASA began the Ares Projects in 2005, an early flight test has been planned toget early engineering and performance data for future launch vehicles. Thisflight is to be the first in a series of step-by-step tests that will prove theflight hardware before it is certified to be safe and ready to send astronautsinto space.

While the future of the program is under review, Ares I-X still serves as anextremely important step in the development and growth of the nation’s humanspaceflight program beyond Earth orbit. The lessons learned and data gatheredfrom stacking and flying a full-size launch vehicle are invaluable to the nextrocket NASA builds. Mission Manager Bob Ess called Ares I-X “the world’slargest wind tunnel test.” With over 700 sensors on board, the rocket willprovide a huge amount of data, some of it collected thousands of times everysecond, which can be used to validate the computer models NASA is using todesign the next generation of launch vehicles. It’s a sign of bigger things tocome.

The transition from the Space Shuttle was brought home visually when Atlantisrolled out to Launch Complex 39A. With the current generation of human spacevehicles on one launch pad and a test vehicle on the next, the agency islooking toward the future. 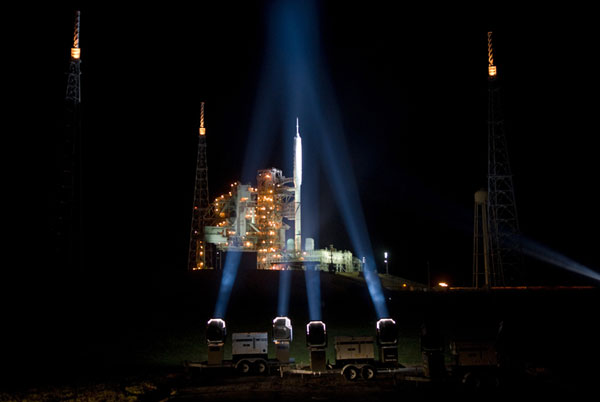 New missions and new technologies offer NASA new ways to communicatewith the public. In addition to providing press releases and press conferences,NASA will be using the internet to share the Ares I-X story with the public.Live coverage of the launch will be occurring throughout the day on NASA TV<https://www.nasa.gov/ntv>, both online and on cable television. For the latest press releases and formalstatements, interested surfers can refer to the official Ares I-X site <https://www.nasa.gov/aresIX>.

This blog <https://blogs.nasa.gov/cm/blog/Ares%20I-X/>, of course, will be posting status reports, links, stories, and videos, aswell as other information of interest; links also will appear on Twitter <http://twitter.com/NASA_Ares_I_X>.

NASA Edge <https://www.nasa.gov/nasaedge> will have reporters interviewing spectators at the “Turn Basin” launchviewing site here at Kennedy Space Center to capture thoughts and reactionsfrom people watching the launch live and in person. Those videos will appear onthe AresTV channel <https://www.youtube.com/user/AresTV> on YouTube.

Finally, we will be updating content on the Ares I-X Facebook page. There isplenty to do and see with Ares I-X, and NASA will be doing its best to makethis mission accessible and interactive. This will be a test not only of rockethardware but also of the agency’s ability to engage the public. We look forwardto sharing our story with you. 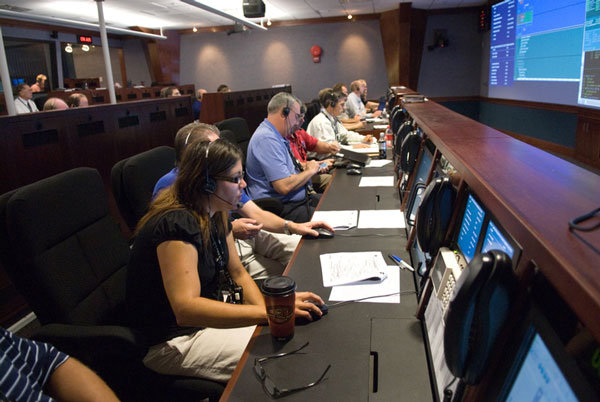 The team completed the final dress rehearsal of the Ares I-Xlaunch yesterday—the launch countdown simulation certification run. It was thelast time the launch team will have to practice their procedures before thelaunch on Tuesday.

Now, Firing Room 1 in the Vehicle Assembly Building’s LaunchControl Center is where the action is: the people who monitor the vehicle andpress the ignition key to “go!” However, part of the launch team also can befound in a building across the Banana River. A converted aircraft hangar atCape Canaveral Air Force Station might seem like an unlikely place to put a launchsupport team, but it works great for the I-X Launch Support Team.

The Launch Support Team is like the “back room” or “help line”for the launch controllers, with rows of seats full of subject matter expertsand managers on the consoles on hand to answer questions when problems come up. 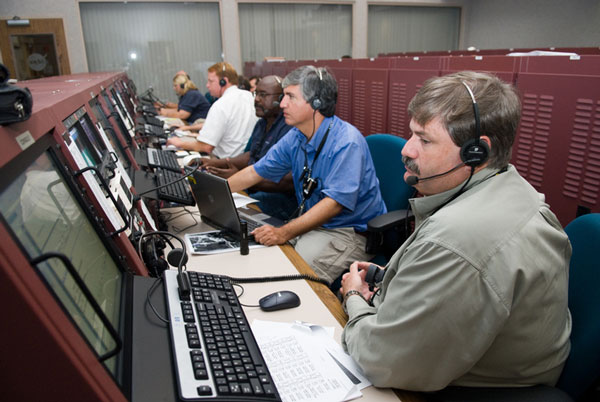 These simulations are for learning, not necessarily formaking life easy, so the countdown simulation was specifically designed tothrow several curveballs at each of the teams supporting launch up to andincluding the Launch Test Director and the Constellation Program Manager JeffHanley.

After the simulation scenario exercises are finished every issueis reviewed by the team with the Firing Room controller for each elementsummarizing what she or he thought had happened and what steps were taken tocorrect the problems. The members of the launch team from the other sites thenchimed in to offer congratulations, discuss what could be done differently ormake helpful suggestions for the future. The clarity and honesty of this sortof exchange is necessary so everyone “in the loop” understands what went rightor wrong.

As Bob Ess, the Mission Manager, put it during the FlightTest Readiness Review, “The only failure would be a failure to learn from thistest.” The Launch Support Team was exhausted after the simulation, but awarethat there is always more to learn in flight testing. 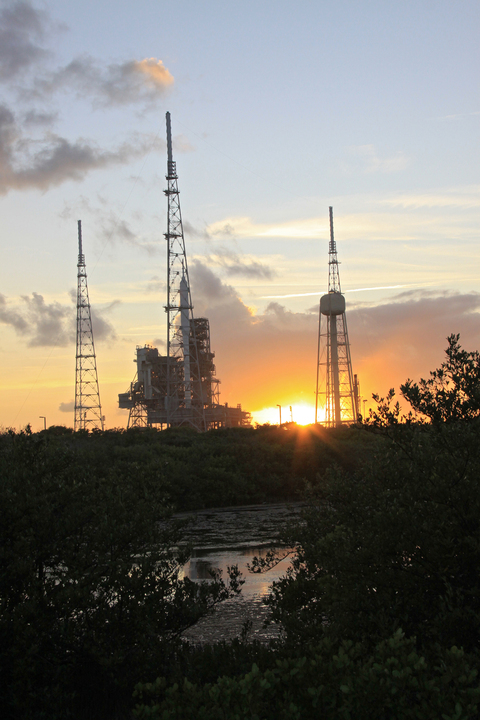 Often, in thereadiness review prior to any launch, there are several open items, “I-forgots,”or other work still left to do before a mission is given a go-ahead for launch.Today, the Ares I-X had nearly every box checked. The Ares I-X team has certainlydone its homework, and what little remains can be completed in the next coupleof days before launch.

Generally speaking, technical issues can hold up a flight readiness review. Ifthe hardware or software isn’t working, the launch could be delayed until theproblem is fixed. However for I-X there was nothing to talk about. No technicalproblems are affecting the mission. Again, the team has done its work andbecause of that, we got a relatively trouble-free readiness review.

The only remaining question mark is the weather, which is still touch and goright now. Forecasts are predicting a 40% chance of favorable weather onTuesday.

But the hardparts—the things NASA can do something about—are all good to go.

The unanimous verdict of the FTRR Board: Ares I-X is ready to fly October 27!

Today is a pretty big day.

The top agency brass has assembled together today at KennedySpace Center here in Florida for a meeting called the Flight Test ReadinessReview. It is, as you might have guessed, a review to determine whether we areready to launch the rocket. It’sreally the “final exam” for Mission Manager, Bob Ess and the Ares I-X flighttest team as a whole.

At the FTRR the agency leadership and mission managementevaluate the work that the Ares I-Xteam has done in building the rocket and its ground systems. The review also includesa report from the I-X team on everything the review board has asked them to doin previous reviews. As it stands, the I-X team has answered all of thequestions the board asked at the previous System Requirements Review,Preliminary Design Review, Critical Design Review, and Mate Review.

During today’s meeting, presentations are being given on therocket’s hardware, work progress, mission objectives, what we’re expecting onlaunch day and weather forecasts.

At the conclusion of the meeting, the members of the reviewpanel give their opinion on whether we are “go” or “no-go” for launch onOctober 27. 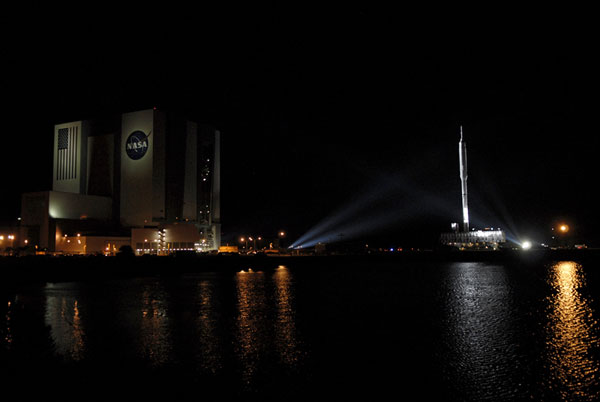 If the still images weren’t enough for you, check out the time lapse footage of the rollout to the launch pad. 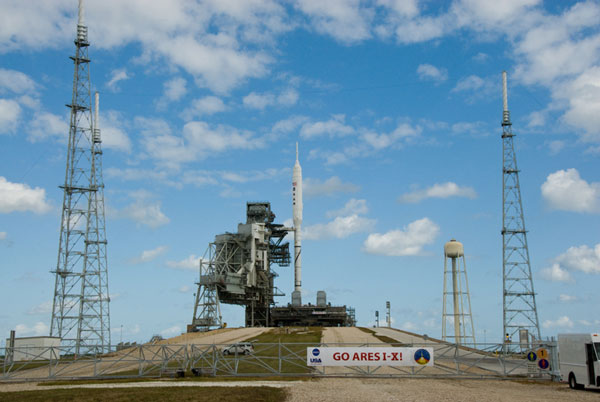 The Ares I-X team is still hard at work going through a lastset of tests and making final preparations for launch.  On the docket today is the IntegratedSystems Test or IST. The IST is a final electrical check of the avionics, orcomputer controls systems, to make sure that everything is in working order andthat the vehicle is ready to go. 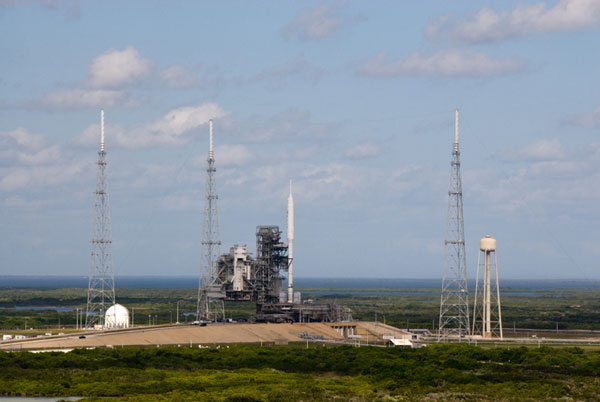 This set of tests will take about 14 hours and is the lastoverall systems test before launch.

Here is a sample of what the IST includes:

·      – A simulated countdown from T-4 minutes to makesure all systems are doing what they should be doing.

·      – Checks of the transmitting signals from the rocket’santennas to the telemetry station (the station that receives the data that the      rocket is recording and transmitting) to make sure that there is a strong signal.This check has to be done at the pad because of safety  concerns regardingradiating radio signals inside the VAB. Even without the safety concerns, thetransmitted signals wouldn’t reach  the telemetry station through the walls ofthe VAB.

·      – Checks of the c-band tracking system, which iswhat the range uses to track location of the vehicle. They make sure it putsout the  right signals and that they are being received on the ground.

– A hot fire test, which runsthe first stage’s thrust vector controller (or steering system) as it wouldoperate in flight.

Bottom line, the IST is the whole integrated system (therocket, launch pad, mobile launch platform, ground control system, andeverything else) being operated together just like it would be on launch day. Theonly major difference is that the pyros are not yet connected for obvioussafety reasons. The pyros are what ignite the booster, blow off the hold downclamps, separate the two first and upper stages, and deploy theparachutes.  The pyros will be connected after IST in prep for launch.

Launch pad 39B has a new resident. 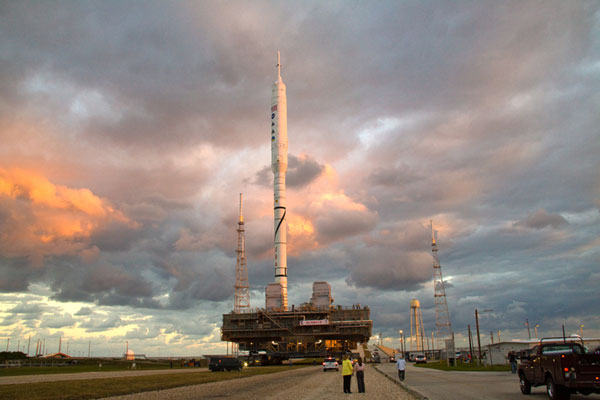 Ares I-X completed its 4.2-mile journey to the pad and thetest rocket is now sitting, secured down to the pedestals, on a mobilelauncher.  The launch director called “hard down” at 9:17 am EDT.

It is really amazing to see the rocket out there on the pad.A lot of hard work — by a lot of dedicated people from across the country –over the past few years has brought us to this point and made this possible.

During the next week, technicians at the pad will performelectrical and mechanical checks on the vehicle to make sure it is ready for itsflight test. The team will be testing hydraulic power systems, unit hot firesystems, steering and internal power systems among others.

The mission managers will also meet on October 23 for a Flight Test ReadinessReview where they will thoroughly discuss whether the flight test is ready toproceed and set an official launch date. As it stands now, Ares I-X is targetedto launch October 27 at 8 a.m.

Rollout is underway! The rocket started moving at 1:39 amEDT. When it cleared the threshold of the huge Vehicle Assembly Building the Xenon lights lit it up. 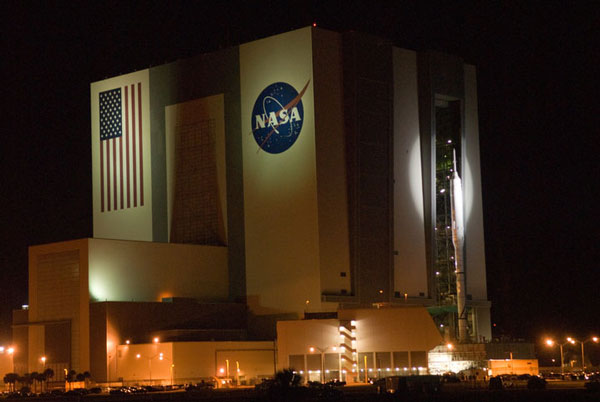 Members of the press stood along side the crawler way andgot pictures of the rocket and interviews with the mission management team ofBob Ess, Ed Mango, Jon Cowart and Steve Davis. 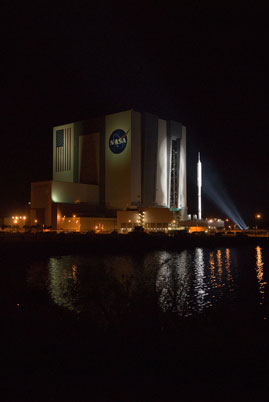 We’ve got a few hours to go before Ares I-X makes it to thepad. It should get there shortly after sunrise, which should make for somefantastic pictures as well. 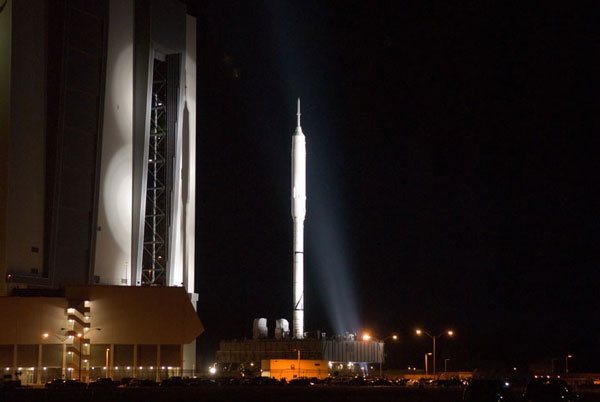 So we’re right down to it now. The team is busy making finalpreparations before the huge door on the Vehicle Assembly Building rolls up andthe rocket inches its way out and down the 4.2-mile track to launch pad 39B.

Right now things look pretty good for tonight’s rollout. Thegiant crawler-transporter is ready, the team is working through theirchecklists and even the weather appears to be cooperating. (knock on wood) Theforecast is projecting peak winds tonight at Kennedy Space Center at 26mph, (23knots) which is well within our guideline limit of 35 mph. (30.5 knots) As itstands this afternoon, there is a 10% overall chance of weather criteriaviolation during the roll to the launch pad.

First motion is scheduled for 12:01 EDT and the trip isexpected to take about 7 hours. I guess that’s what you get when you travel 4.2miles at a top speed of 0.8 miles per hour.