How do you stop a 200,000-pound solid rocket motor from ending up at the bottom on the Atlantic Ocean? With the biggest, strongest rocket parachutes ever built of course!  Right now, these massive parachutes are snuggly packed in the forward section of the Ares I-X rocket’s first stage, awaiting their debut performance.  The Ares I-X flight will be the first full flight test of the Ares I parachute system.

NASA, its partners have successfully tested each element of the parachute system. In fact, over the last three years, the team has conducted three pilot, two drogue, three single main, and one main cluster parachute drop tests at Yuma Proving Ground in Yuma, Az. 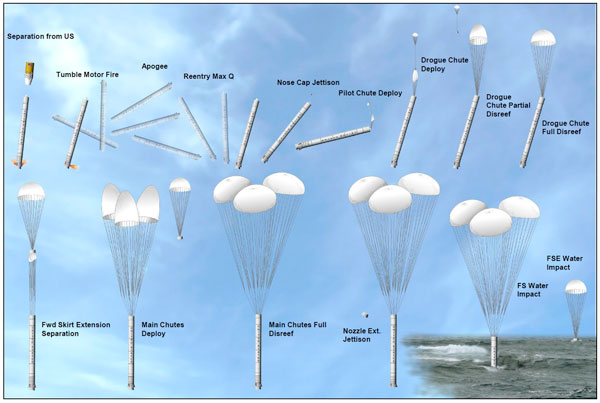 The Ares I-X first stage separates from the upper stage at 124 seconds into the test flight, at an altitude of 130,000 feet. The vehicle’s four tumble motors then fire to slow the first stage for its return trip to Earth and eventual recovery. At an altitude of about 15,000-feet the nose cone is jettisoned, immediately deploying the pilot parachute.  The pilot chute will in turn deploy the 68-foot drogue parachute, which is the workhorse of the system and will re-orient the booster to vertical and slow it to acceptable conditions for main parachute deployment. At about 4,000 feet, the separation at the base of the forward skirt extension occurs, pulling out the three 150-foot diameter main chutes packed within.  These majestic red, white and blue canopies slow the booster even more, carrying it gently to splashdown.

“The velocity and re-entry environments we’ll see on Ares I-X are bit less than Ares I, but we will get a great deal of data to help us refine the final flight hardware designs,” said King.  “We can’t wait to see our giant parachutes off the coast of Florida.”