Greetings from the northernmost community in the world, along with the northernmost gym, hot tub, post office, bar, and the list goes on. With all the science updates, I’m sure you’re wondering what it’s like to live in this village of 150 people, secluded from all forms of civilization, and surrounded by scientists and researchers from over a dozen different countries. Well, it’s amazing and many of us would prefer to extend our stay a little bit longer.

Ny-Ålesund is primarily a research town owned and operated by a government public corporation called Kings Bay AS. They employ a permanent staff of 30 – 35 people who live here year-round, running the various research stations and making it possible for us to conduct our research in quite comfortable living conditions. Although experiments run year-round, the majority of scientists arrive in the summer months and increase the population to about 150 people. This creates a unique atmosphere where dozens of disciplines are combined with just as many nationalities, and individual projects often become international collaborations.

This cross-cultural atmosphere also extends to the social life of the town and its inhabitants. I’ve learned more random phrases in more languages than I will ever be able to use or remember. Strangers instantly become friends and opportunities arise simply from overhearing random conversations at a meal or on the street. Yesterday, I took the huskies for a walk (more like they walked me), while Don Herith and Mark Sumich challenged the Chinese to a game of badminton and ping pong (not surprisingly, they lost to a little Chinese girl). And something as simple as a housewarming party turns into a “rager” when the whole town shows up, which isn’t that impressive considering the size of the population. National holidays become town holidays, as was the case with Bastille Day, which we celebrated last week in the workshop of the French research station. Besides the fact that there weren’t any French, I could sense something was wrong. While indoors, I still had shoes on my feet! The tradition of taking off your shoes inside any building dates back to the coal-mining days when, in order to prevent tracking in any dust from the mines, everyone took their shoes off before going indoors.

While at first quite annoying, this practice makes me appreciate the cleanliness and the novelty of going to a bar in my socks. But alas, Bastille Day was different, yet like any other day at the same time. In Ny-Ålesund, an international holiday is just another excuse to get together, play some guitar, and grill in the basking sunlight. In that respect, the midnight sun helps foster such a social atmosphere, but it definitely took some getting used to. Double sets of blinds, sleeping pills, and eye masks were the norm for most of us for the first few days. But now, we’re all sound sleepers, or we’re just so tired from work that it doesn’t matter. Back on the mainland (yes, that’s what the rest of the world is called), I never carried a watch because I could generally tell what time of day it was just by the position of the sun. No such luck here. Time, like age, is just a number. 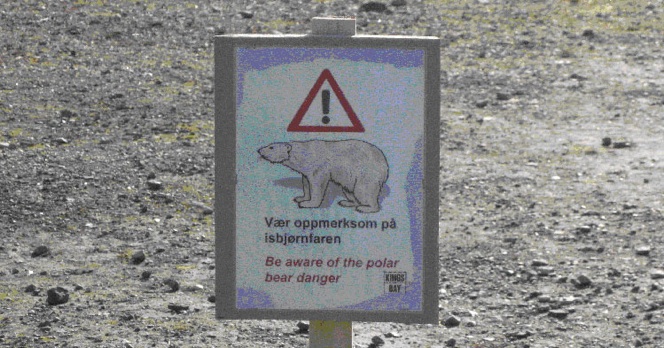 We can’t forget about the polar bears. Within town, you’re safe from the wrath of these adorable creatures who top the Arctic food chain (technically even we fall below them since they’re a protected endangered species). However, once you pass that sign at the end of the road, you’re fair game, which is where the Polar Bear and Rifle Training comes in handy. A few within our group (myself included) took the course and were taught generally to avoid the gentle giants. If all else fails, all five of us turned out to be pretty good shots, so the bear stands no chance.

Although the likelihood of seeing a bear, let alone being attacked by one, is very slim, no one takes any risks. All doors within Ny-Ålesund are unlocked to allow people to escape to safety if one does come into town, and rifles are a common sight. If you try to leave Ny-Ålesund, the town watchman will drive by in his truck and politely ask you to come back and get a gun. As you can tell, this town is very unique and special to all who visit and live for any length of time. I hope I was able to give you a small glimpse into our world.

One thought on “Life at the top of the world”