Here’s a look at the full-size mockup of NASA’s Orion crew exploration vehicle being tested in the water off the coast of Maryland. This mock-up weighs 18,000 pounds and will help the teams get a good idea of what happens both inside and outside the spacecraft after it lands in the ocean.

This scene shows NASA and Department of Defense personnel familiarizing themselves with the Navy-built Orion mockup in a test pool at the Naval Surface Warfare Center’s Carderock Division in West Bethesda, Md. Ocean testing will begin April 6 off the coast of NASA’s Kennedy Space Center in Florida. The goal of the operation, dubbed the Post-landing Orion Recovery Test, or PORT, is to determine what kind of motions the astronaut crew can expect after landing, as well as conditions outside for the recovery team. The experience will help NASA design landing recovery operations including equipment, ship and crew necessities.

NASA also will showcase the mockup in a day-long public event March 30 on the National Mall in Washington. The mockup of the Orion will be parked on the Mall between 4th and 7th Streets, SW, in front of the National Air and Space Museum. The spacecraft mockup is on its way from water testing at the Naval Surface Warfare Center to open water testing in the Atlantic off the coast of the Kennedy Space Center. 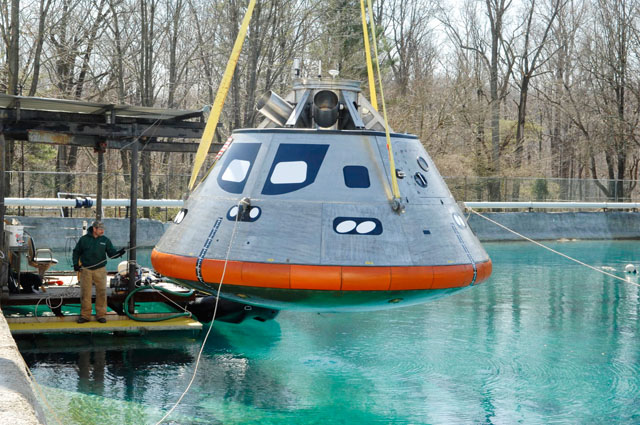 4 thoughts on “Your First Look”