The first of five segments for the Ares I development motor (DM-1) was moved April 16 from ATK Space System’s production facility in Promontory, Utah, to the nearby test stand, in preparation for the first ground test, targeted for August. This next generation of solid rocket motor will be used to launch humans on future missions to the International Space Station, the moon, Mars and beyond.

Manufactured by ATK – prime contractor for the Ares I first stage – the motor is similar to the Reusable Solid Rocket Booster (RSRB) currently used by the Space Shuttle, although the new motor is one segment longer (five segments instead of four) and there have been modifications to accommodate the Ares mission objectives. Following ATK’s usual manufacturing procedure, the segments were cast and then went through a complete X-ray inspection.

The moving of segments to the test area will continue at a rate of one per week until the final segment arrives May 12. The week between segments allows for insertion into the test stand and assembly as each piece arrives.

The critical forward segment, which contains the propellant fins and igniter, took the longest to manufacture and was the first to arrive at the test stand. The DM-1 motor will be assembled there from the top down.

The forward segment is designed with “fins” or slots in the propellant that provide additional surface area for burning more of the solid fuel. This creates more power, or thrust, during launch. The Ares first stage team has added a twelfth fin as opposed to the eleven fins in the shuttle’s RSRB and made the fin area three-and-a-half feet longer. The fins are cast in the propellant by using a mold during the casting process.

When the historic DM-1 booster undergoes ground testing later this year, it will be the first full-scale booster test of the new Ares I crew launch vehicle. 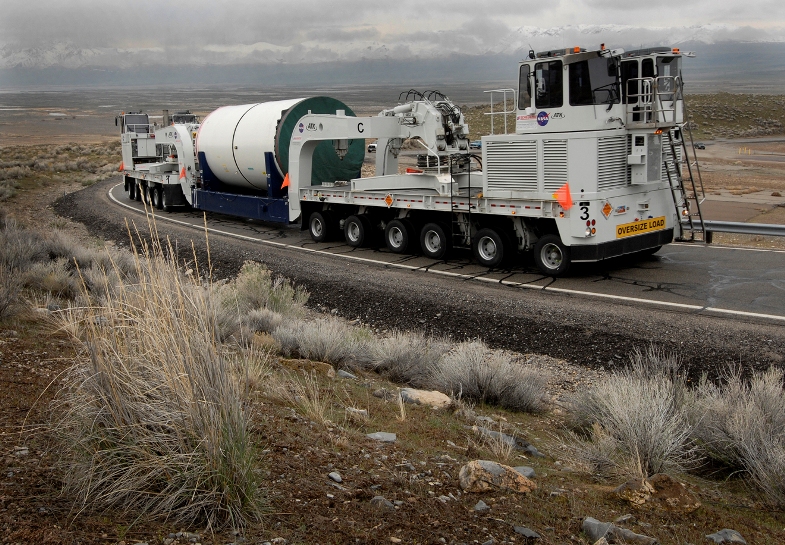 2 thoughts on “Ares Motor on the Move”