SHAZAM!!! Like a mighty bolt of lightning, NASA’s new Ares I rocket first stage motor will be tested later this month sending a plume of fire reaching temperatures more than 3300 degrees Fahrenheit and smoke hurdling for hundreds of yards.

The five-segment solid rocket development motor, or DM-1, will be tested at Alliant Techsystem’s (ATK) test stand in Promontory, Utah on August 27. An interesting byproduct of the test is a unique geographical change that will take place when 50 cubic yards of sand is transformed into a shimmering glass field. 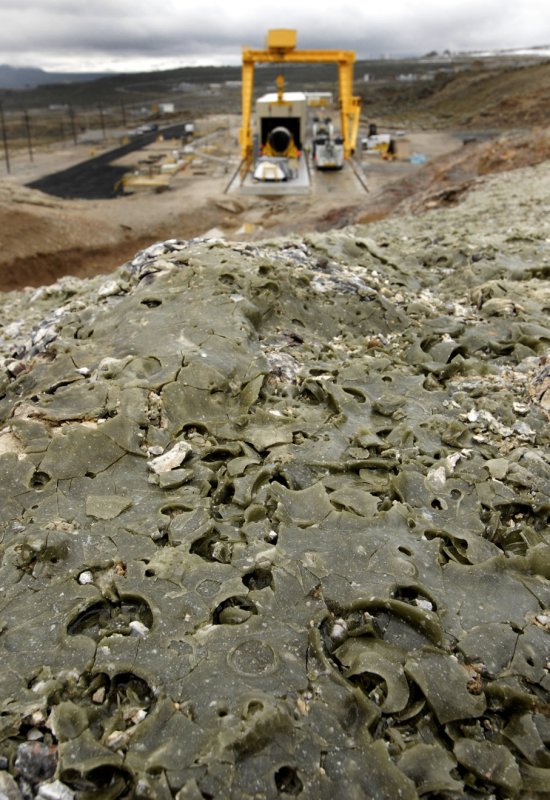 The heritage of shuttle motor testing can be seen in the foreground with a glass field,
created assand used to protect the test stand was heated to temperatures more
than 3,300 degrees Fahrenheit. In the distance, preparations for the first ground
test of the Ares I Development Motor 1 (DM-1) have begun at ATK’s facility
in Promontory, Utah. (ATK)

The art of glass making has been around for centuries. No one knows exactly when or where glass was first made. Evidence shows that it may have originated in Mesopotamia, where pieces of glass have been found, believed to date from the third millennium BC.
When Googling the term “making glass” on the Internet you will learn the process involves basic materials like sand, soda and lime. It also requires very high heat in excess of about 2,912 degrees Fahrenheit.

But engineers at NASA and ATK will use a slightly different method when they conduct the first full-scale, full-duration test firing of the first stage motor for the Ares I rocket.

Four dump truck loads of sand are placed over the aft end of the test stand as a thermal protection barrier to the concrete pad. The intense temperatures escaping the motor at Mach 3, penetrate the sand six inches deep, as the result, a glass field is formed in the wake of the plume.

“The glass has a green tint to it based on the minerals that are in the sand,” said Kevin Rees, director of test and research services at ATK Space Systems. “It eventually crumbles and erodes as it is exposed to weather elements, but right after a test it is fun to see the glimmer reflecting off the glass that was sand a few minutes before.”

So the next time you see a test of a solid rocket motor, you’ll know that this ultimate “high temp” oven is doing more than just paving the path for America’s future in space.