How do you stop a 200,000-pound solid rocket motor from ending up at the bottom on the Atlantic Ocean? With the biggest, strongest rocket parachutes ever built of course!  And they are snuggly packed in the forward section of the Ares I-X rocket, awaiting their debut performance.  The Ares I-X flight will be the first full flight test of the Ares I first stage parachute system. 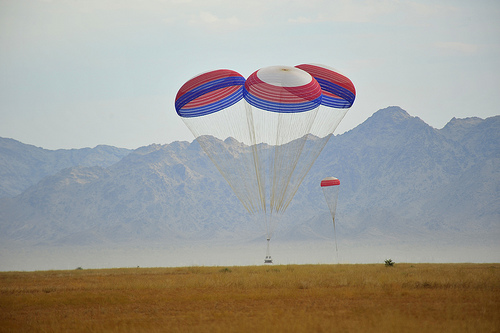 NASA, ATK and other partners have successfully tested each element of the parachute system. In fact, over the last three years, the team has conducted three pilot, two drogue, three single main, and one main cluster parachute drop tests at Yuma Proving Ground in Yuma, Az.

“You simply can’t drop 200,000 pounds out of a plane. The only way we can do drop testing is from a C-17 aircraft and there is a 90,000 pound load limit. The Ares booster weighs more than double that,” said Ron King, Ares first stage deceleration subsystem manager at NASA’s Marshall Space Flight Center in Huntsville, Al. “And Ares I-X is the only test of the entire flight sequence from start to finish, or separation to splashdown as it will be.” 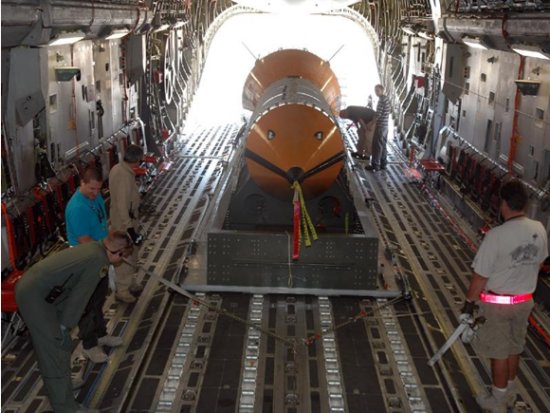 On October 9, 2009 NASA and industry engineers dropped a 72,000 pound test payload
from the back of a U.S. Air Force C-17 aircraft from an altitude of 25,000 feet, tying the
record for the heaviest load ever extracted from the aircraft during flight. This drop test
was designed to push the main parachute’s canopy to its  limit — supporting a
250,000-pound dynamic load. The payload included the main parachute for the Ares I
rocket. Credit: U.S. Army Yuma Proving Ground

The Ares I-X first stage separates from the upper stage at 124 seconds into the test flight, at an altitude of 130,000 feet. The vehicle’s four tumble motors then fire to slow the first stage for its return trip to Earth and eventual recovery. At an altitude of about 15,000-feet the nose cone is jettisoned, immediately deploying the pilot parachute. The pilot chute will in turn deploy the 68-foot drogue parachute, which is the workhorse of the system and will re-orient the booster to vertical and slow it to acceptable conditions for main parachute deployment. At about 4,000 feet, the separation at the base of the forward skirt extension occurs, pulling out the three 150-foot diameter main chutes packed within. These majestic red, white and blue canopies slow the booster even more, carrying it gently to splashdown. 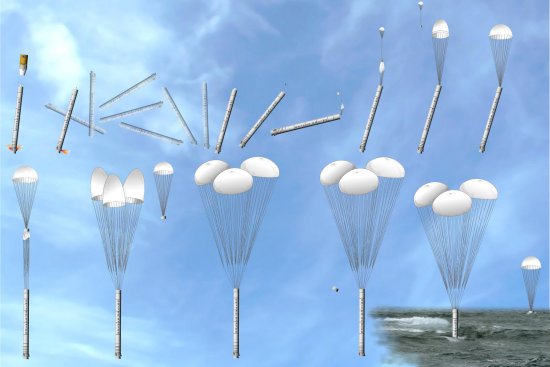 “The velocity and re-entry environments we’ll see on Ares I-X are a bit less than Ares I, but we will get a great deal of data to help us refine the final flight hardware designs,” said King. “We can’t wait to see our giant parachutes off the coast of Florida.”

NASA gave the official “go” for the Ares I first stage Development Motor 1 (DM-1) test targeted for August 25 concluding a two-day test readiness review. Nineteen NASA managers signed off on the official readiness statement. It reads: “Pending satisfactory completion of normal operations flow and open items identified in this review, the Ares I First Stage test hardware is ready to support the static testing of DM-1.”

The review was held at ATK Launch Systems Huntsville, Al. office on July 21-22.  More than 50 solid rocket motor technical experts reviewed every detail of the DM-1 solid rocket motor, now installed in a  test stand at ATK’s Promontory, Utah test facility.  The first stage five-segment development motor has been under development since 2006. It is based on the design of the space shuttle’s four-segment configuration, but includes several modifications.

Max Tavoian, ATK Space Systems manager opened the formal review for ATK. Tavoian noted that most people in the room had been working toward DM-1 for the last three and a half years.

“This review will tell you why DM-1 is ready to go. DM-1 has 46 design objectives and 650 instrumentation channels. This test will prove out a series of technology improvements and design attributes including changes to the propellant grain, nozzle and updated liner and insulation implemented by ATK related to the new five-segment reusable solid rocket motor.”

Over the two days, the team engaged in a healthy and thorough discussion about the motor’s instrumentation, propellant and motor performance, insulation and components, metal case components and seals, and the overall readiness to “go” for test on August 25. The upcoming test is expected to provide valuable data on motor internal pressures, thrust profile, and performance of new designs on the nozzle and the internal motor insulation.  Additional benefits include data on roll-control, acoustics and vibration data. Engineers need all of this data to continue to design the Ares I rocket.

No issues emerged from the review that impact test readiness. Final instrumentation will be installed over the next month in preparation for the firing.

Alex Priskos, first stage manager for the Ares Projects Office at NASA’s Marshall Space Flight Center in Huntsville, Ala. chaired NASA’s test readiness review panel. He closed the meeting enthusiastically, acknowledging the hard work of the team which made this successful review possible. “This effort has been a thorough and professional effort. The professionalism of  this team gives me a high level of confidence as we go forward with this test,” he said.

“DM-1 is about taking advantage of all we’ve learned from the Shuttle program — the safety aspects and technology enhancements — and moving forward to the next stage of crewed exploration beyond low-Earth orbit,” explained Priskos. “This test is the first step in a  series of development and qualification tests. The ultimate goal is to design and build a first-stage motor that increases performance, is safe, reliable and will meet or exceed all of our requirements and objectives. The entire Ares team is looking forward to the DM-1firing next month and reviewing the test results.”