NASA and contractor engineers have developed multiple options for “de-tuning” the Ares I rocket to prevent any problematic thrust oscillations from originating in its solid-rocket main stage to sync up with the natural resonance of the rest of the vehicle.

The Constellation Program Control Board set a formal baseline for thrust oscillation mitigation during a meeting Dec. 17.  Moving forward, the Ares I vehicle design will be updated to include the addition of upper plane C-Spring isolator module and the upper stage fuel tank LOX damper.

While evaluations of data from the DM-1 motor test and Ares I-X test flight to date show no problematic thrust oscillation vibrations occurred, the Constellation team concluded incorporating the upper plane C-Spring isolators and LOX damper at this phase of design is a sensible addition.

“When we discover an engineering risk, like thrust oscillation, we tackle it with full rigor,” said Jeff Hanley, Constellation Program manager. “That’s what this team has done with thrust oscillation. We assumed the worst when the problem was first discovered. The good news is there is no empirical evidence of problematic oscillations from our ground test of the first stage development motor or during the Ares I-X first test flight.”

“The isolators work like shock absorbers to de-tune the vehicle and the LOX damper will counter the vehicle acoustic response by absorbing and disrupting the oscillation. Together these options will give us added confidence in the tuning of the vehicle as we mature the Ares and Orion designs,” added Hanley.

The NASA team, along with the prime contractors, has worked this issue carefully, understanding and minimizing any effects of the integrated vehicle response by introducing new thrust oscillation hardware into the design. The team will “scar,” or prepare, the upper stage design to accommodate the addition of this mitigation hardware at a later time, if desirable.

“The options approved today puts us on a robust foundation as we move forward,” said Hanley. “Finalizing the thrust oscillation design now allows us to keep to our schedule and provides contractors specific requirements about what we need them to build.” 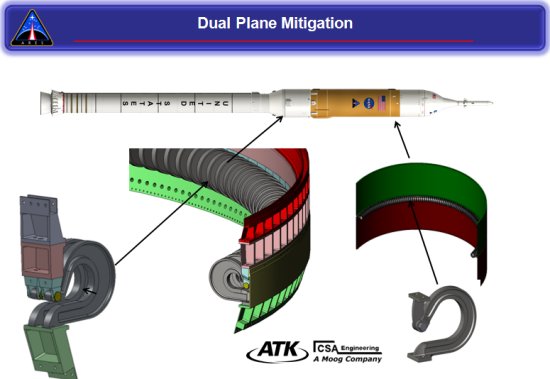 This week, engineers from across NASA and partner contractors gathered at Marshall Space Flight Center to analyze designs to minimize vibrations in the Ares I rocket. During this three-day meeting of the minds, participants showcased tremendous progress toward understanding the physics of thrust oscillation, updates to several candidate mitigation solutions, and results from early subscale testing of candidate hardware. This was not a decision-making session, but an opportunity for engineers and managers to scrutinize proposed solutions. 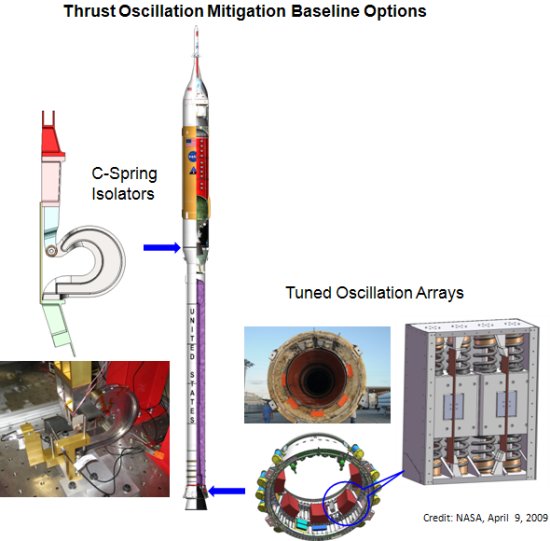 Thrust oscillation may be felt for a few seconds at the end of first-stage powered flight. Also called “resonant burning,” thrust oscillation is a phenomenon in all solid propellant rockets forcing vibrations through the entire structure, in the case of Ares I, that includes the Orion crew module.

To date, several promising mitigating systems have been identified to counteract vibrations stemming from thrust oscillations. Two primary options are actively under development:

Isolators:
Isolators are C-shaped springs that could be placed between the Ares I frustum and interstage to “detune” the vehicle resulting in less vibration for the crew while maintaining vehicle control stability. The design is based on an existing “soft-ride” technology developed by CSA Engineering, Mountain View, Calif. “Soft ride” technology, which has flown on 17 spacecraft, has been typically placed inside the payload shroud to protect payloads from oscillations.  The current  Ares design incorporates a ring of 136 C-shaped springs and attach hardware into an isolator module which measures 18.5 inches in height.  ATK Launch Systems, located near Brigham City, Utah, is the Ares I prime contractor and is working aggressively with CSA Engineering to mature the isolator design. Moving forward, engineering teams will continue to evaluate the performance of the C-shaped springs and supporting hardware. Engineering design units have been tested on a “shaker stand” which simulates the thrust oscillation loads and demonstrated functionality and effectiveness of this system.

Tuned Oscillation Arrays:
An earlier active mitigation concept called Reaction Mass Actuators (RMA), has matured into a passive solution known as Tuned Oscillating Arrays (TOA). This system will be mounted inside the first stage aft skirt and includes an array of boxes that contain masses suspended on springs which absorb or soak up the vibration oscillation produced during first stage flight. Analysis of the aft skirt has indicated  that the existing skirt design can support the TOA approach. Following the recent STS-119 shuttle mission, engineers conducted a fit check with TOA volume simulators and found the solution to be feasible in the existing aft skirt design. Next steps include finalizing  bracket concepts to connect TOA boxes to the aft skirt and examining handling processes and equipment needed for ground support. The active RMA concept, which includes powered springs that actively cancel out the vibration, is on hold but available for restart if required later.

Two other alternative thrust oscillation strategies under study as risk mitigation to the baseline include:

A “dual plane” solution:
A dual plane solution would employ two rings of isolators, one located at the interstage/frustum interface and another between Orion and the Ares upper stage. Having redundancy of isolator rings may provide increased “detuning” capability to ensure the Orion does not respond to the oscillations of the first stage motor.

LOX damper:
Engineers are also evaluating a concept called a LOX damper, which uses the fundamental physical properties of liquids to leverage the kinetic energy in the movement of the existing liquid oxygen in the upper stage tank to dampen out vibrations. The devices, installed within the liquid oxygen tank, can engage the mass of the liquid propellant to generate momentum in the fluid itself to counter the vehicle acoustic response and disrupt oscillation. Engineers are evaluating the effectiveness and applicability of this design.

NASA engineers and astronauts are also evaluating crew situational awareness under various vibration conditions in a simulator at the Ames Research Center. NASA is working to set the final requirements for acceptable crew vibrations – currently a 0.25g requirement that was developed during the Gemini era.

Next steps:
Testing of the isolators and TOA candidate mitigation hardware will march forward.  NASA teams will capture additional data from future shuttle flights and from the upcoming test flight of Ares I-X to better understand the risk to the Ares I vehicle and the Orion capsule. Considering all information, NASA will finalize vehicle designs in a thrust oscillation preliminary design review which will define which system, or combination of systems, works best to minimize vibrations on the Ares I vehicle.