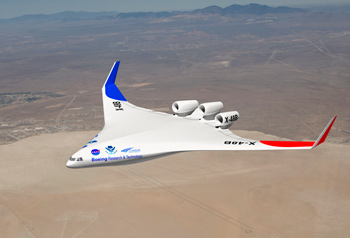 
I asked Dryden’s X-48B & C project manager Tim Risch why he thought the blended wing-body airplane got a lot of notice at the Green Aviation Summit.

He said it’s because it’s a good idea. “One of the main reasons is that it has such great promise for revolutionary improvements in the three main areas that the summit is emphasizing (noise, fuel burn reduction, and emissions). Also, the X-48 has strong government and industry participation, and the concept has been demonstrated in flight, which lends credibility to the concept.”


Welcomes and intros are done, compliments of NASA Ames’ director Pete Worden. First speaker up was Dr. Jaiwon Shin, NASA’s Associate Administrator for Aeronautics Research. He gave an overview of the NASA Aeronautics Research Mission Directorate, or ARMD for short. He then described the success and utility of the X-48B Blended Wing Body research aircraft being flown at NASA Dryden.

BTW, I’m not alone; there are several fellow NASA Dryden Flight Research Center folks attending. We’ll see if we can’t chat with some of them later during breaks. 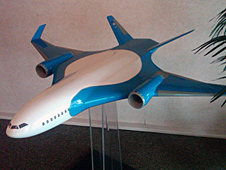 byperformance since thebeginning, when the U.S. Army contracted with the Wright brothers for the firstmilitary aircraft. This is still the case. Now, NASA Aeronautics is looking tochange that by focusing on improved propulsion solutions, alternate fuels,advanced aerodynamic configurations, and even conservation, i.e., flying lessin order to conserve fuel.