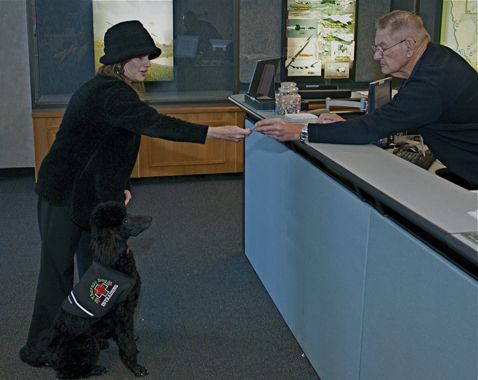 This is the end of my fourth week at work. There are so many new things I get to see and do. The people aren’t so anxious, and they don’t lean down so fast when they see me. She seems calmer, too. The people know my name. I like to hear it down the hallways and when they come into Her office. When we walk into the big buildings, I hear my name come from out of doorways, or from far down the hall. Sometimes we stop and talk to the people. They touch me and I like that a lot.

Image right:  It’s official! Ella gets a badge and she’s ready to go to work.

I feel good here. I like to walk out ahead of Her, but She tells me to come back by Her side. I don’t need Her so much anymore. I have lots of people now; luckily, they don’t come home with us – I think they just stay here until we come back.

Today we went to a place to get my badge. A nice man in a blue uniform took my picture. The picture is on a piece of plastic now. It is just like Hers. It makes me feel proud, and really part of the pack here.

Kathy’s note – Unlike service dogs such as guide dogs for the blind, therapy dogs often start their career as adults. They are sometimes acquired from animal shelters or other rescue organizations. Starting Ella’s training when she was a six-month-old pup means that it may take a bit longer than normal to know whether she has the kind of temperament that will make her good at this. She can be tested for certification after she is one year old. But even if she passes those first tests, it doesn’t mean she will have the kind of positive impact I hope for. 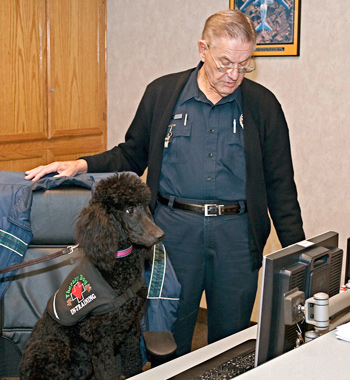 Ella’s first weeks have been exciting. She has blossomed from being reserved and rather overwhelmed to being overtly happy and welcoming to most of the people she meets. In fact, it is now time to start the next phase of training. She is very good on the leash, but now she is starting to want to walk ahead and take the lead. I understand that not everyone wants to touch her, and so she has to learn to wait to be told by me that she can greet someone. I am struggling with her initiative. Like working with a shy or uncertain child just coming out of their shell, there is a point at which some discipline must be applied. Timing will be very important. I think I’ll wait for a few more weeks; I don’t want to start too soon lest she become discouraged.

Ella had her first encounter with an aircraft tug, a substantial and noisy machine. She was unfazed when it came out of a hanger door chugging and sounding its horn as safety dictates. She was happy to stand and get affection from the driver.

Perhaps the most exciting and momentous experience was her introduction to NASA Administrator Charles Bolden. Each NASA center has a director, and on each Monday they all gather at their various locations to have a virtual meeting with Mr. Bolden. Every center has a room especially for these kinds of meetings, complete with cameras, microphones and a giant screen on which all of the center representatives appear. The Dryden center director, David McBride, asked me to bring Ella to this meeting. Ella had been here just four weeks. We went up to the room and waited in the back for the meeting to start. As the meeting progressed, it was getting close to the time when each center director would give a short report. Mr. McBride asked me to bring Ella up next to him so that she would be on camera. She is still learning to jump up into chairs on command, so I hoisted her up so as not to make too big of a commotion. Luckily, she cooperated and sat quietly. As people began to notice the unusual (if not unprecedented) sight of a dog at the meeting, I started to hear comments and giggles. One person said, “Hey, it’s the Dryden dog.” Another remarked, “I bet she saved someone’s life.”

It was now Dryden’s turn, and Mr. McBride began to introduce Ella. It had been almost 10 minutes and I was worried that she would start to get restless and jump out of the chair.  This was her big moment, and she needed to make a good impression. Mr. McBride explained that she was a therapy dog in training and part of the Employee Assistance Program. As if she were a seasoned actress making her most important audition, she took the cue and made what I think was a lasting impression: looking right at the camera, she gave her biggest, most dramatic puppy yawn ever. Laughter ensued from across the country and throughout the NASA leadership. I believe she got the part.