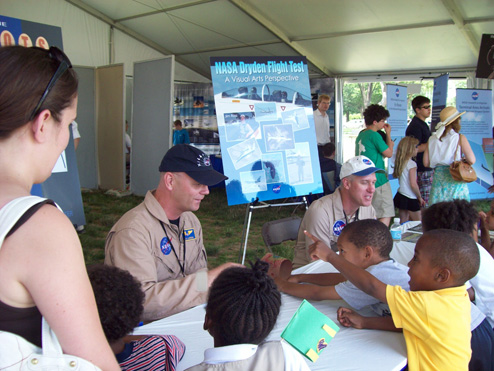 NASA is known the world over as a workplace filled with the best scientific and technical brains ever to fire up an experiment. The agency’s engineers and scientists have spawned some of the most incredible and far-reaching discoveries ever made in the fields of research and space exploration, and in this new era, they show no signs of slowing down.

Fortunately for people like me, though, you don’t necessarily have to be good at math to have a great job at NASA. Sometimes I think working in my office, public affairs, is one of the best jobs a liberal arts graduate could have – the chance to use your education and experience as a writer, editor or journalist to connect the American public with the achievements of the best scientists in the country.

It’s our job to provide the media and the public with information about what NASA does. When NASA was established in 1958, the idea that the American public should know about the agency’s achievements was considered so important that it was written into the founding charter as part of the mission. So that’s what our job is: spreading that information to as many people as we possibly can beyond a strictly technical audience and, in the process, hopefully stimulating interest in what are known as the “STEM” disciplines – science, technology, engineering and mathematics – among young people who will be NASA’s next generation of scientists and engineers. At air shows, in print publications, on TV and the Web, at schools and community events large and small across the country, we’re doing everything we can to tell America about all the great things NASA scientists do. And in more than eight years of working here, I’m happy to say that few things in my professional life have been more rewarding than standing in a NASA exhibit at a hot Midwestern air show, sharing information with a public that overwhelmingly seems to love its space agency. Anytime our research pilots volunteer to help out by joining us at those air shows, the line for their autographs is out the door all day.

Our challenge is turning information that’s most often really technical in nature into terms that are friendly to a general-readership audience. My background as a print journalist and an English major helps a lot. In journalism, you’re called on every day to boil down the high points of one topic or another, and do it as briefly and accurately as possible. (Using proper grammar and spelling!) That kind of background is ideal for what we do in our office: we learn about an aircraft or a research project or a new technology, and then write about it in ways that are clear and accessible to a wide variety of readers. It might be for a reporter interested in doing a more in-depth piece about a project or aircraft. It might be for a teacher who wants to incorporate information derived through NASA research into a classroom science lesson. Or it might just be for an average guy or girl out there who’s loved airplanes ever since he or she can remember. Whoever it’s for, we want to tell them whatever they want to know about NASA’s work.

Here at Dryden and all across NASA, our rock star engineers and pilots make the job great. In our office, we’re so proud of everything they do and it’s a privilege to be in a position to help get the word out about their groundbreaking accomplishments. Our goal is to tell as many taxpayers as we can about the advancements being made in their name, and to live up to our mission as it was spelled out in the NASA charter. Me, I’m better off leaving the scientific breakthroughs to the math whizzes.