Fire and Ice: Memories of Challenger

By Peter Merlin
NASA Dryden History Office
While attending college in Florida in the mid-1980s I had the opportunity to view numerous space shuttle launches, including first flights of Discovery and Atlantis. I’ll never forget the thrill of witnessing spectacular nighttime and early morning liftoffs, the building excitement of the countdown, the startlingly bright flames of the vehicle’s solid-fuel rocket boosters, and the all-penetrating sound as the shuttle breached the heavens.
Unfortunately, images of Challenger’s destruction 25 years ago are also indelibly etched in my mind. This first loss of a shuttle and crew forever shattered the illusion that manned spaceflight had become as routine as traveling on a commercial airplane.

On the morning of Jan. 28, 1986, I joined a throng of tourists and space buffs on a narrow strip of land spanning the Banana River between Kennedy Space Center and Cape Canaveral Air Force Station, roughly six miles from the launch pad. Bitterly cold temperatures – it was 36 degrees at launch time – had failed to deter me. The sky was deep blue and cloudless, and I huddled against the chill.

Excitement built in the final moments as the launch announcer called out the countdown. “Ten, nine, eight!” Billowing steam clouds signaled main engine start. “Three, two, one, zero!”
People began to cheer as the rocket rose silently into the sky atop a pillar of flame and smoke. It took nearly 10 seconds for the thunderous sound of liftoff to reach the spectators. A distant crackling quickly built to a pulsating roar that shook my bones.

As Challenger soared upward, everything seemed normal. But suddenly, the rocket’s smoke trail blossomed into a brownish-orange ball. The vehicle’s two boosters cut diverging paths across the sky, disappearing seconds later in twin flashes of fiery yellow. Various smaller objects emerged from the expanding cloud, each ascending in a ballistic arc and trailed by a plume of white vapor.

I heard a woman shout, “Look, booster separation!” I knew, however, that it was far too soon for that. At this point in the flight Challenger would have scarcely reached 50,000 feet. “No,” I said to her. “Something is very, very, wrong.”

The NASA public address system had fallen silent so I could only watch and wonder. Not yet grasping the full import of what I had witnessed, I still expected the orbiter to somehow emerge from the cloud and return for an emergency landing in what astronauts call RTLS – a return-to-launch-site abort. The truth gradually dawned as I registered the amount of debris falling toward the ocean.
Challenger’s smoke trail, brilliant white against azure, ended in a twisted mushroom cloud. Small pieces of debris, like a snowstorm of glitter, drifted on the wind for nearly an hour. As my disbelieving eyes scanned the sky for an orbiter that would not return, I saw people pointing in forlorn hope at a white parachute that I recognized as part of a booster rocket. It soon became clear that the crew of seven astronauts was lost.

Over the ensuing months, the nation mourned. Presidentially appointed investigators determined causes and made recommendations. The shuttles eventually returned to flight when Discovery blasted into orbit Sept. 29, 1988.
Since that day, there have been more than 100 successful shuttle missions and one additional fatal mishap, the loss of Columbia and its crew in 2003. As the shuttle fleet approaches retirement in 2011, I feel a sense of awe at all that has been accomplished by the men and women who created, maintained and operated the most complex space vehicle ever built, and I remember those who sacrificed their lives in pursuit of exploration on the final frontier. 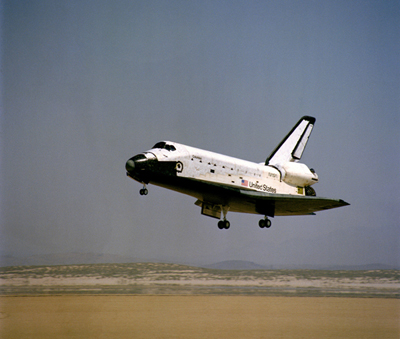