By Don JohnsonDeputy Project ManagerIkhana UASAs part of my job supporting NASA, I recently gave a short presentation to a committee doing an assessment of Dryden Flight Research Center, where I work. I work on the Ikhana – a modified Predator B unmanned aircraft system – and that is what my presentation was about. A couple of the key people with whom I work were on business travel that week, so the duty to make the planeside presentation fell to a couple of other team members and me. This was a tour of Dryden’s aircraft and capabilities, so the committee received numerous briefings during the afternoon as they toured from hangar to hangar. Now, this committee is part of the Aeronautics and Space Engineering Board of the National Research Council. In other words, a typical government bureaucracy – well, maybe not so typical. The committee is made up of a bunch of high-roller VIPs from places like MIT, Georgia Tech, Lockheed-Martin, Boeing…really BIG brains, about 15 of them, plus several local Dryden managers.Now flash back to when I was but a lad, not yet 15 years old. I would sit, mesmerized, in front of our little black-and-white TV, watching Walter Cronkite talk about the major milestones and big events of the American space program – yep, NASA. Then, on July 20, 1969, the first human uttered the words, “That’s one small step for man, one giant leap for mankind.” I was 14 years old that day, attending the Boy Scout National Jamboree at Lake Pend d’Oreille in Idaho along with about 50,000 other Boy Scouts from around the country. Somehow, the scouting organization managed to create some kind of giant big-screen projection system so that we – all 50,000 of us – could watch that first moon step in real time. Remember, this was 1969 – amazing! That event in history, that first step, will be remembered for as long as there is history and there are people to remember Apollo as one of humanity’s greatest accomplishments. In addition to the big-screen presentation, the guest speaker on the night of this Boy Scout gathering was astronaut Frank Borman, the commander of Apollo 8. That was the mission in 1968 that first orbited the moon (no landing), the mission on which astronauts read from the book of Genesis on Christmas Eve. He arrived at the outdoor theater right next to where I was sitting on the grass. I think I still have the picture I snapped of him while he was standing there waiting to go onstage. Well, living through these special events made quite an impression on a young lad, and set the direction of my life for the next 45-plus years. Years later, I became an aerospace engineer, and went to work for the Air Force at Edwards Air Force Base. By the time I graduated in 1977, the Apollo program was over and NASA was drawing down – kind of like the same situation as now due to the space shuttle program coming to an end. There is only one shuttle launch left to go, after which our astronauts will get to and from the space station on Russian spacecraft. After 32 years with the Air Force, I retired and went to work for Tybrin Corp., supporting…NASA. Well, that’s pretty cool!Back to the present. If you haven’t guessed by now, it turns out that one of the members of this committee of 15 Big Brains hired to assess Dryden capabilities in 2011 was indeed that same first human to step on another heavenly body – the moon – in 1969: Neil Armstrong. He is STILL in the aeronautics business! I had the honor of telling him about our little Ikhana project, and then he and some other committee members asked us a few questions. After the briefing ended, Neil Armstrong immediately stood up and came over to the three of us who had just briefed and shook our hands, thanking us for the presentation, then quietly moved on to the next set of briefings.There aren’t many people in this world that I consider a hero. He is one of the very few. Some days, it really pays to get up in the morning! 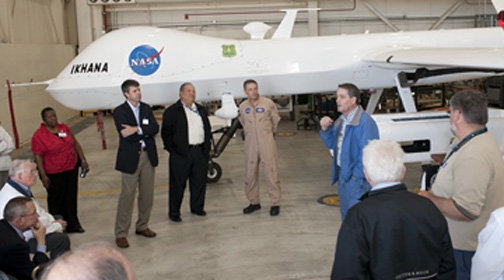 Image: Ikhana deputy project manager Don Johnson (at right in tan shirt) is among listeners as Ikhana lead operations engineer Greg Buoni briefs members of the National Research Council Aeronautics and Space Engineering Board during a visit to NASA Dryden. Apollo 11 astronaut and first man on the moon Neil Armstrong (in white jacket) is seated at left.

One thought on “Shaking Hands With A Hero”