(Editor’s Note – NASA Dryden Flight Research Center pilots Mark Pestana and Herman Posada recently flew NASA 7, a modified Beechcraft B-200, to Casper, Wyo., to talk with several hundred students and their teachers about NASA and their careers as research pilots of both manned and remotely operated research aircraft. Posada writes about his experiences on the trip, which was part of NASA’s Summer of Innovation educational outreach program.)

We were told early in July about the trip to Casper. I began to look forward to such an adventure. Anything that involves flying and I am in.

I then received the details of the mission and found out it was an education outreach. I enjoy sharing my experiences with the kids and the public. 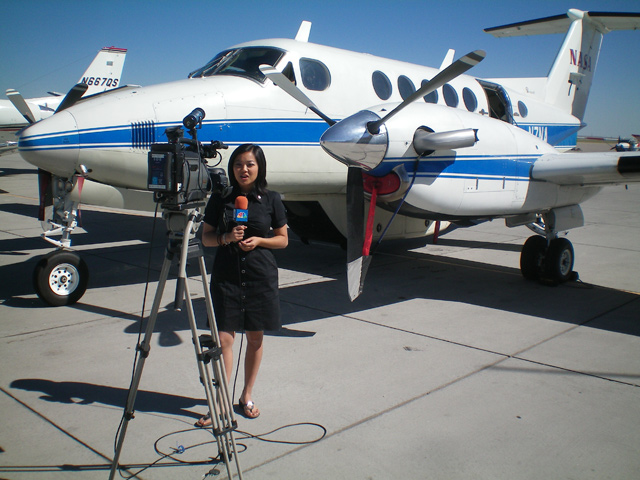 Rina Nakano of KCWY-TV, Ch. 13 in Casper, Wyo., does a stand-upreport in front of NASA 7, a Beechcraft B-200 King Air. Nakanointerviewed Dryden pilots Mark Pestana and Herman Posada during theirSummer of Innovation educational outreach visit to a Casper middleschool.  (Photo courtesy Herman Posada)

We assembled all the material for presentations we planned to make and were ready for the flight on July 13. The weather was great, which made the flight even more enjoyable. I had heard that the school we were going to was also tracking our progress on the Internet through one of the flight-tracking Web pages. Awesome!The mission was getting more exciting as the day progressed. We landed at Casper and were met by a very friendly staff at the fixed-base operation. We drove into town and enjoyed a quick lunch. Soon after, we were navigating through town and found the college where the class was being held. Our hosts helped us set up our displays and equipment, and we noted all the excitement in the room as the kids and staff eagerly awaited our presentation.

The Power Point presentation on what NASA does and demonstrations in the class were incredibly well received. The question and answer session went on for close to an hour. All questions were interesting and well thought out by the class. Of particular interest was how water is consumed in space. The class was intrigued by this simple task. We then broke out into smaller groups to discuss space and aviation topics and gladly signed pictures for the kids. We had brought pins and miniature airplanes and the group was very appreciative.

As the day drew to a close we were invited by the teaching staff to a dinner in town. We gladly accepted and were met at the restaurant by a great group of teachers. We shared stories and experiences as we enjoyed a great meal.

The next morning we promptly got out to the airport to set up for the kids to visit the airplane. We were also told that a media crew might visit. After a short wait, the first school bus showed up with the first group of students. Some of the students had never been in an airplane. It was awesome seeing their reactions to coming inside and going into the cockpit. More questions came up and small discussions ensued on how the airplane works and how we navigate in the air.

It was a great feeling inspiring these kids on something that I enjoy. I recall being their age and aspiring to be a pilot and wondering if I would ever get there. Telling my story to them perhaps energized some of them to follow my footsteps and career.

Eventually the second bus showed up and more students got to see the airplane. The local TV station sent out a reporter and she also got to see the airplane and do an interview with us. It aired that night and was well received. When we had shown all the kids and teachers the airplane we prepared it for what would be an uneventful flight back to Dryden.What an awesome mission to inspire the kids in Casper, Wyoming!Herman Posada    Research Pilot, Unmanned Aircraft SystemsNASA Dryden Flight Research Center