I know that there is a perception in the general public about thetraditional government worker who has no incentive or desire to work hard. Ihaven’t found too many of those people working at NASA, and there certainlyaren’t any of them on the Orion Abort Flight Test Project. On an average dayNASA Dryden has 30 to 50 people, stationed at the White Sands Missile Rangein New Mexico, preparing for the big event: the first test launch of theOrion Abort Flight Test system. 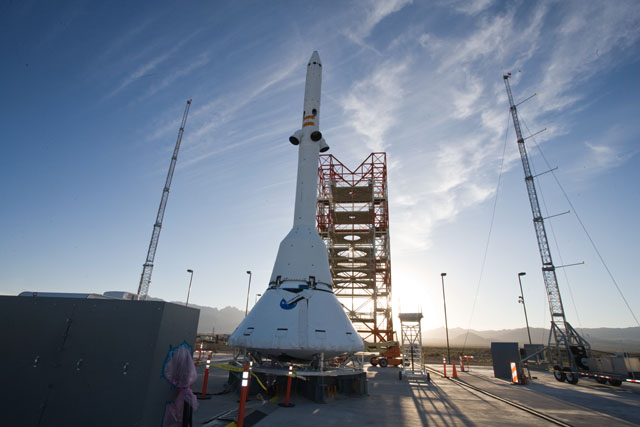 Our team is joined by the Flight Test management team from the NASA JohnsonSpace Center (Houston, TX), engineers and technicians from the NASA LangleyResearch Center (Hampton, VA), support personnel from the NASA White SandsTest Facility (Las Cruces, NM), safety personnel from the NASA Kennedy SpaceCenter, and numerous contractors including prime contractor Lockheed Martin. One of the biggest issues for managers has been trying to decide when to“throttle back” this incredible team to keep them from overworkingthemselves.  Anytime you have a dangerous work environment and high-valueflight hardware, we enforce work-hour limitations designed to keep peopleand one-of-a-kind test hardware safe.  It’s always a tough balance betweenthe can-do attitude of our team and the need to keep everyone safe.  And safety is key, since we are getting close to igniting a half millionpounds of solid rocket thrust that will pull the 31,600-pound Launch AbortVehicle (which is comprised of the crew module and the launch abort system)to an altitude of about one mile. Two other, smaller solid rockets will beused to steer the test article and then jettison the launch abort systemfrom the crew module before three enormous parachutes inflate to slow thecrew module to a survivable descent rate prior to landing (see animatedvideo http://www.dfrc.nasa.gov/Gallery/Movie/Orion/HTML/EM-0099-08.html). During the past three months our combined test team has been completingfinal component installations and integrated system checks.  Just last week,the team completed a mission rehearsal to verify the functionality of everyelement that will be used on launch day: from the crew completing pre-launchprocedures, to chilling the solid rockets to proper temperatures, to fullstaffing of the mobile control room, to power-up of every telemetry antenna,radar and tracking camera, to launch of weather balloons and more. This testhas helped us iron out the details of the day-of-flight checklists inpreparation for the Pad Abort 1 launch. While it’s impossible to detail all the work that the team has accomplished,I would like to mention a few people that have risen to the occasion in thepast few weeks to keep this project on track. I wish I had more space,because I could fill 10 pages with kudos. – Mary Alice Grossman and Sean Clarke led a marathon session to develop,implement and test last-minute changes to many of the control room displaysin preparation for critical ground tests.– Our flight instrumentation team (Dave Dowdell,  Ernie Valdez, Leo Gross,Joe Hernandez, Phil Hamory, Lynette Jones, Susan Sprague) completed finalcheckout of over 700 instrumentation sensors on the test vehicle whileworking on the second shift, to avoid impacting integration testing that wasongoing on the day shift. And they did it ahead of schedule!– Operations engineer Matt Berry stepped up to provide critical support tothe avionics team while maintaining his current heavy workload, and fellowops engineer John Ruhf took on the testing and fit checks of thelate-arriving Launch Abort System Protective Cover so that it would be readyfor the upcoming launch.– Monte Cook is doing an excellent job leading the incredible avionics teamthrough a very challenging and dynamic time after their former (legendary)leader, Paul Aristo, was promoted.  – Bill Condzella and Jeff King have consistently stepped up to review andapprove complex operations and test procedures to ensure that all safetyrequirements are being properly addressed. At times, this has been amonumental task under tight schedule constraints.So as we all follow the progress of this on NASA-TV and the NASA website,let’s not forget the people behind the projects…. I am proud to support anexceptional team of technicians, mechanics, engineers and many other missionsupport staff that are about to write that next chapter in American spacehistory.  Brent CobleighDirector, Exploration Systems Mission DirectorateNASA Dryden Flight Research Center