One of the best parts of my job is sharing with the public the details of our many research projects. On occasion, we get to meet some really cool people. 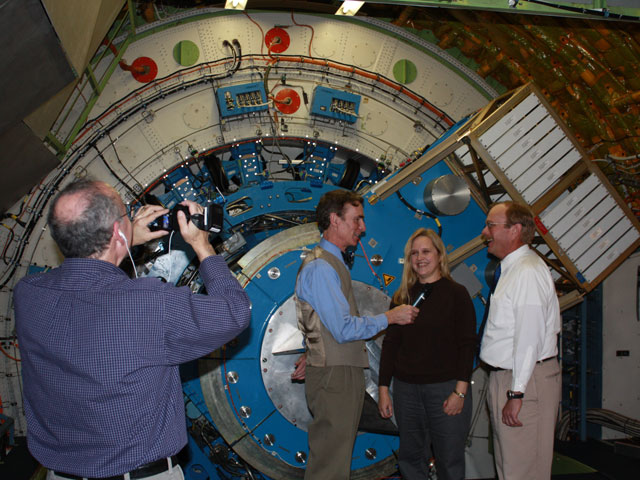 Just last week, Bill Nye The Science Guy paid a visit to our facilities to conduct interviews for an upcoming program for the Planetary Society. The focus of his visit was to learn more about the SOFIA, NASA’s Stratospheric Observatory for Infrared Astronomy. As his host, I was curious to see what he was going to be like in real life. I wondered if he was really into the science, or if it was just some act he put on to make a few bucks. Let me tell you, it is no act!

As I greeted Bill and his colleague Mat Kaplan from the Planetary Society in the parking lot, before we could even finish exchanging greetings Bill had to show me the new Volt he was test-driving for General Motors. He was jazzed about the technology behind this vehicle and had to point out all the cool features.

As we went inside the Dryden Aircraft Operations Facility in Palmdale, small crowds of curious bystanders started shadowing us as we walked through the hallways and hangar. Young and old, technicians, physicists, administrative and professional staff alike, the reaction of those he passed was the same: awe, admiration and sheer excitement at getting to see and meet The Science Guy! Many of our staff commented to Bill that his whimsical and often humorous approach to science had been instrumental in motivating them to choose their career paths. Now, they had an opportunity to repay the favor by showing Bill a thing or two about what they are doing in support of making great astronomical discoveries with the SOFIA. 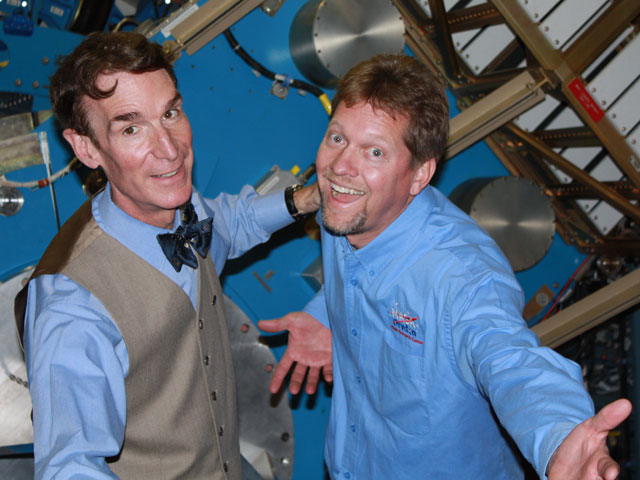 Bill and Mat seemed to spend as much time learning about the modified 747SP aircraft and the 2.5-meter infrared telescope it carries as they did conducting interviews. Bill noted that, as an engineer, before achieving celebrity status he’d actually helped design portions of the aircraft. “How cool is that?!” he noted.

As we were giving them a background briefing on the SOFIA science aspects, you could see Bill’s mind wandering into the unknown…what discoveries would this team make, how would the telescope complement other ground-based instruments…will they let me fly the plane?

The walk-through tour of the aircraft brought out both the engineer and scientist in Bill. His interview questions of Bob Meyer, SOFIA program manager, and Pam Marcum, lead SOFIA scientist, were on target and are sure to make an exciting program for the Planetary Society. The story should be posted to their website, www.planetary.org, in a few weeks.

As center director, let me be the first to welcome you to the Dryden blog site. This is an exciting new Web feature we are embarking on to provide you with additional perspectives on our many projects.

As an engineer, I find myself in a constant struggle to convey information in a technically accurate manner while at the same time keeping it in terms understandable by non-engineers. On the flip side, I am often troubled with the responsibility of explaining the vagaries of federal government management, planning, and budgeting to an engineering community that expects exact answers. The great thing about a blog is that you have the opportunity to help guide the level of detail being provided.As we share information on our projects, I would like to encourage you to leave comments and tell us what you think!

Through this blog site, we hope to introduce the human perspective to the technical work we do and the technical considerations inherent in managing complex engineering projects. I am inviting people from throughout the Dryden organization to post updates on their work and share the challenges and accomplishments they face in their daily activities. Over time, I expect that topics covered in this forum will reflect the diversity of our workforce both in terms of expertise and the projects we support.

If there is a particular topic or item you would like to learn more about, leave us a comment and we will do our best to post the information.  Thank you for taking time to visit the Dryden Blog.