By Joseph LapierreFormer Dryden EngineerI worked at Dryden back in the sixties. For a while I was research project engineer on X-15-3. As I was looking through the Dryden Web pages the other day for a way to contact a test pilot, I got distracted by the research aircraft photo gallery. I searched through it to find aircraft I remembered and found a T-33 in the list. When I looked at the cockpit view I noticed a small white ball in the upper right corner of the instrument panel. I was shocked! I remember why that ball was there – because I’m the one who put it there. 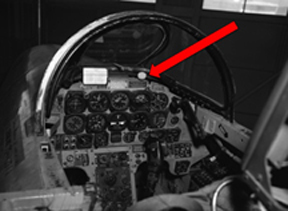 Back in 1962, [Dryden engineer] Roger Winblade was touring the country on a hiring tour. He stopped at St. Mary’s University in San Antonio, where I was about to graduate. I first found out he was there when a classmate told me Roger wanted to see me in the cafeteria. Roger explained to me he had found out from the dean of the physics department that I had been a pilot and wanted to hire me. He was head of the display section in the research division. He had a problem convincing test pilots to accept heads-up displays. He anticipated that, my being a pilot, I could help him get through to them.When I arrived at the test center he quickly introduced me to Joe Walker. And Joe quickly let it be known he wasn’t too pleased, but he told me, “‘See that big guy sitting at that desk over there?’ I said, ‘yes.’ ‘Well, he can’t fly a straight final [approach] in an F-104 to save his ass.’ He told me that if I could come up with something to straighten out his final approaches, then I would be hired. I borrowed the Styrofoam head off of our Christmas tree angel, ran fishing string through it then ran the string through holes in the air-conditioning tubing around the top of the panel and to the back seat. I expected to be able to fly the back seat and work the ball from side to side as the pilot flew the final. Regs being regs, I did have to get checked out in the altitude chamber first.When the ball was full right, it meant the pilot was flying 5 knots too fast on the approach, and full left meant 5 knots too slow. By the third final, Jack McKay was flying a straight final. I ran up to Joe’s office to give him the news, but he already knew because he was watching us from the roof with binoculars.So, I was hired. I had a great relationship with Joe, Jack, Milt [Thompson] and the others. Fred Haise took me on a F-104 ride. He let me fly through Mach 1 then demonstrated a zero-G profile but overshot the altitude to 66,000 feet – with us wearing only flight coveralls!** I also changed the color of the X-15 panel from black to a pale green – but that’s another great story. **above 50,000 feet, full-pressure suits were ordinarily required