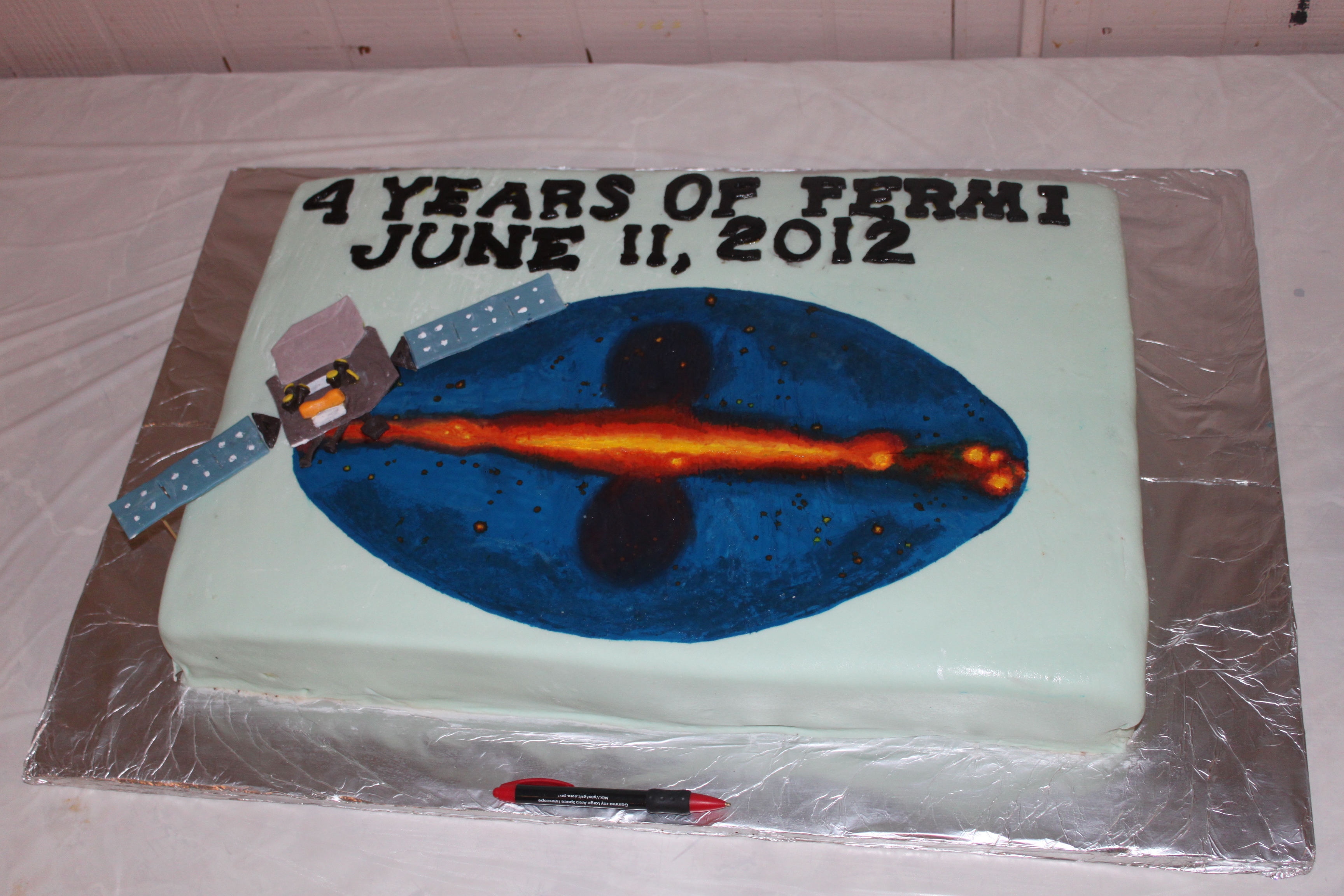 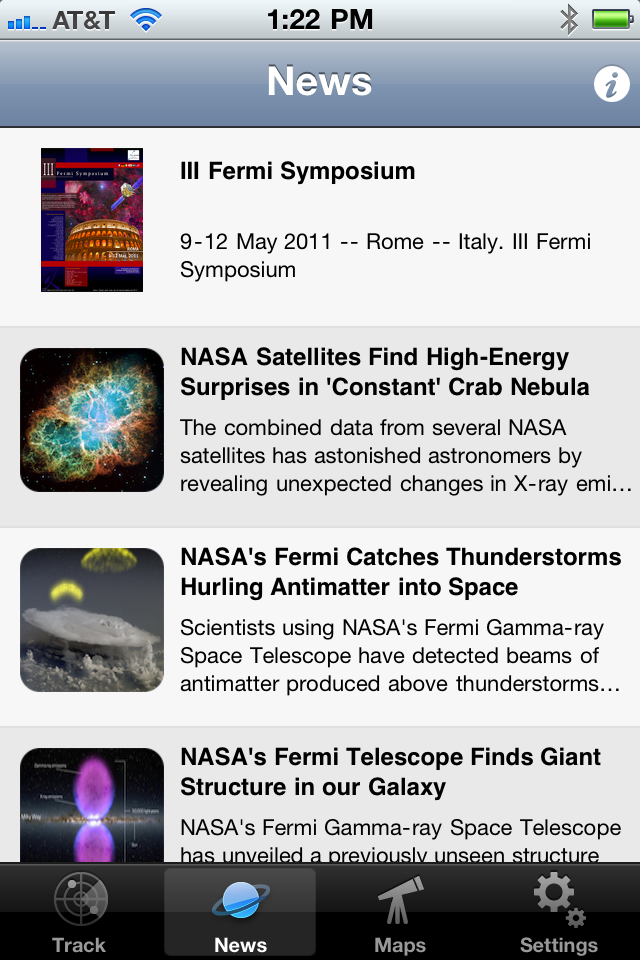 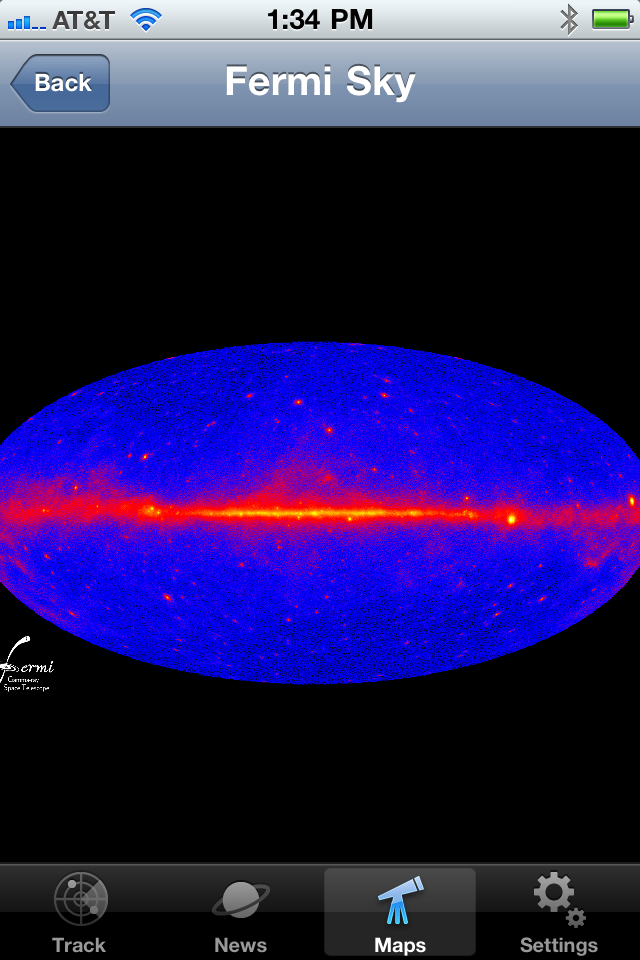 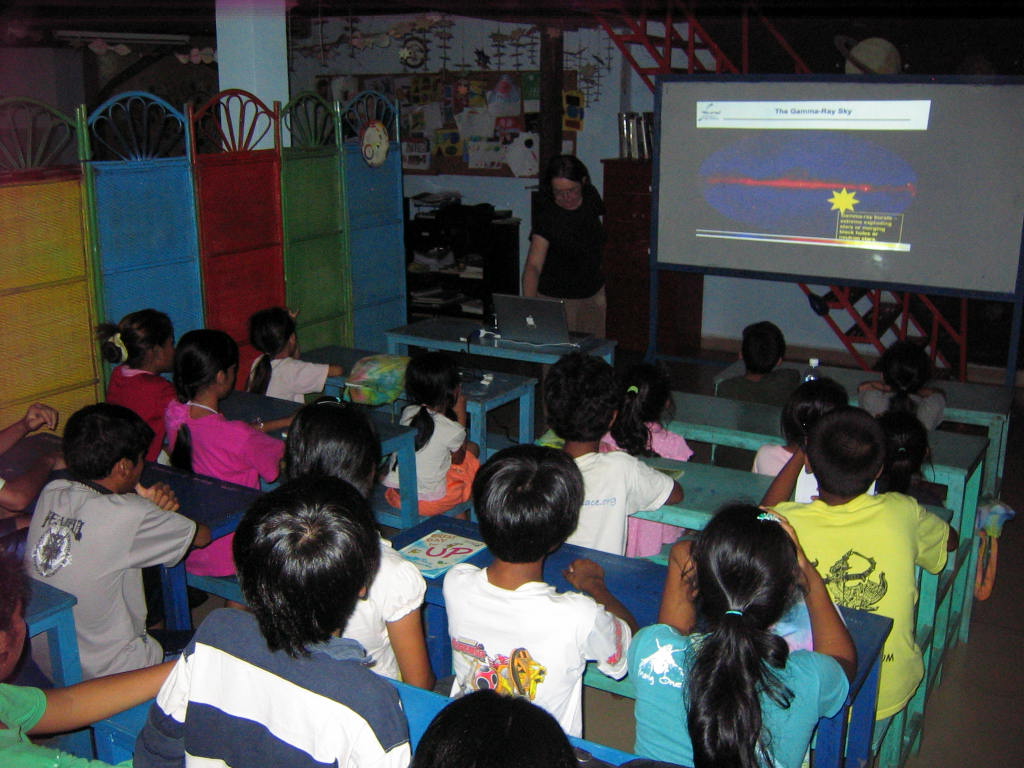 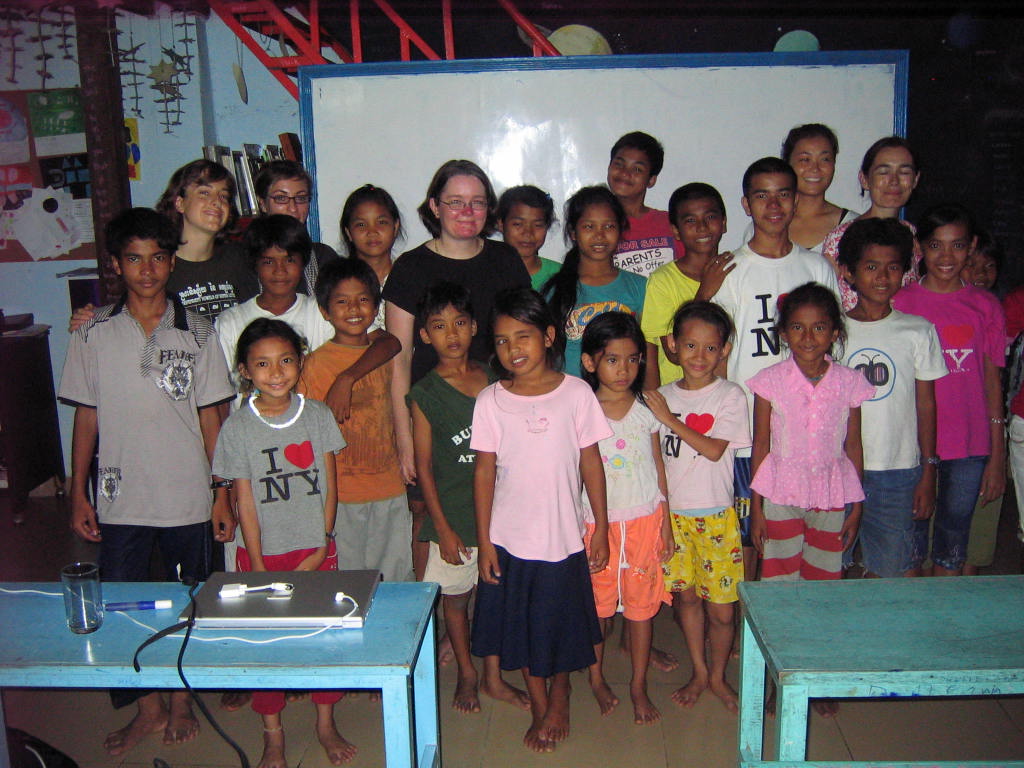 Today has been an exciting day. This morning we noticed that one of the many active galaxies in the Fermi sky had become extremely bright in gamma-rays. We decided to interrupt our usual mode of continuously scanning the entire sky, and instead repointed the spacecraft to stare right at this galaxy for the next few days. This will allow us to track very carefully how it behaves during these bright outbursts. This is the first time that we have ever chosen to repoint the spacecraft to look at an interesting flaring object. We call these kinds of unplanned observations “Targets of Opportunity”. 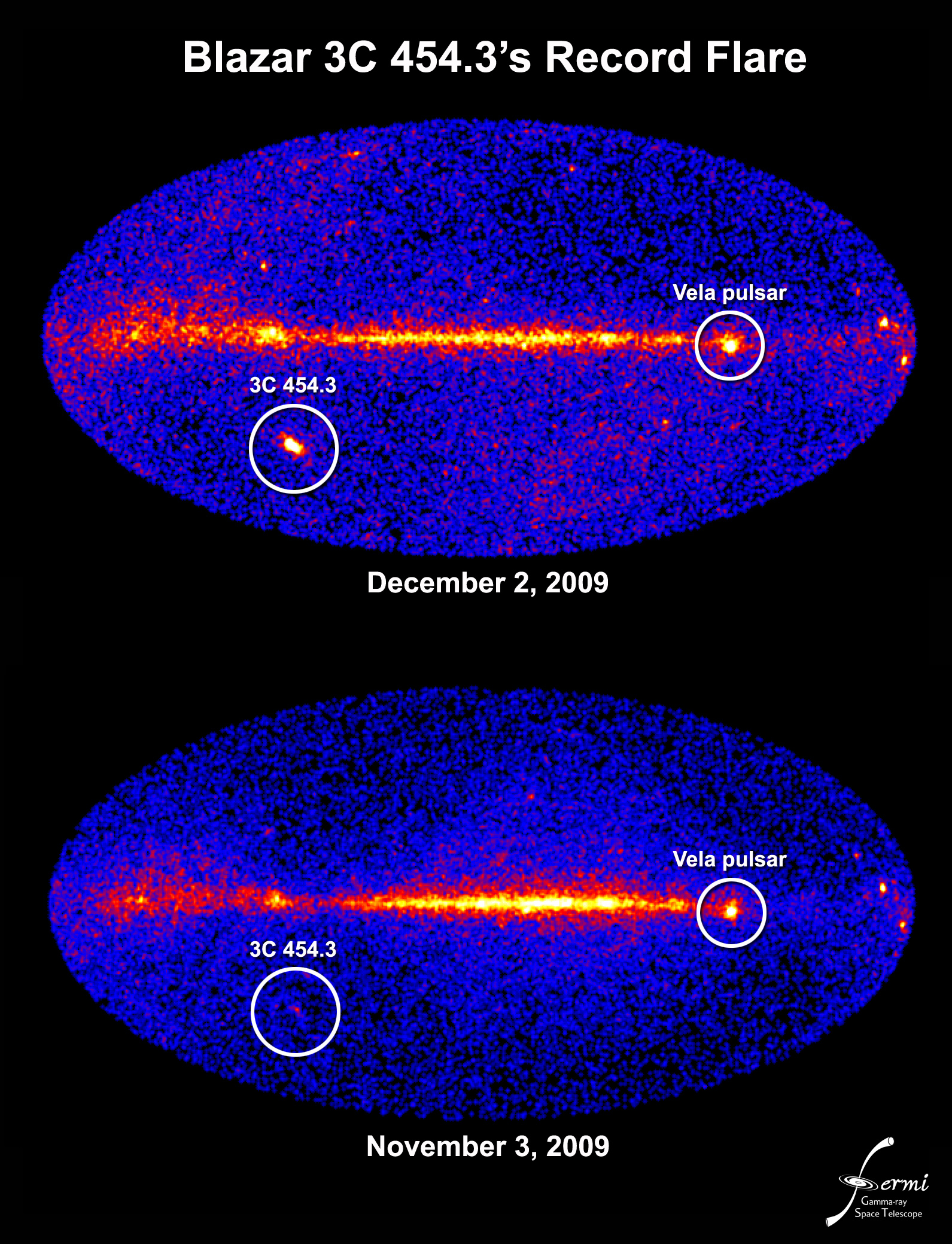 This object, known as 3C 454.3, has been exciting to watch throughout the mission. Shortly after launch in 2008, when we first turned on the telescope, we noticed an unexpected bright object in the newly observed gamma-ray sky. This bright source was the topic of our very first Fermi scientific communication – an “Astronomers Telegram” to communicate to other astronomers that this was an object to watch. It then dimmed somewhat and behaved more quietly for the next year. In December 2009 it flared up again, becoming the brightest persistent source ever seen in high energy gamma-rays (gamma-ray bursts are momentarily brighter, but they are over in a few minutes).

The location of this flaring active galaxy is very fortunate. It is about 38 deg away from a star known as V407 Cyg. Last month, we discovered a bright gamma-ray flare from the direction of this star while it was undergoing a huge optical outburst. Seeing gamma-rays from this kind of stellar outburst was unexpected – this is the kind of surprise that we love to find. We have been monitoring the star very closely with Fermi and many other telescopes to try to figure out what is going on (this could be the topic of a whole blog entry all by itself).  While 38 degrees seems like a big distance (it is around 80 times larger than the size of the moon), the Large Area Telescope on Fermi sees a huge fraction of the sky at once. We can easily point at V407 Cyg and 3C 454.3 at the same time. I can’t wait to see what we find from these observations! 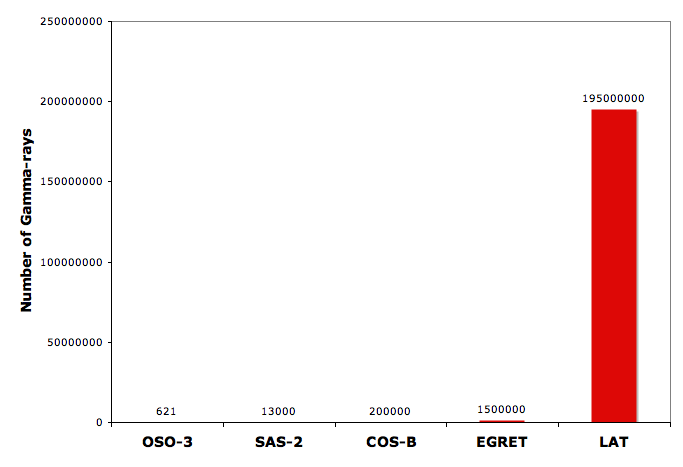 One year ago today, Fermi started sky survey observations after completing observatory and instrument commissioning ahead of schedule.

The previous entry described our first light results. Since then, we have discovered new populations of pulsars in  our Galaxy. We have observed a extraordinary gamma-ray burst, which was the most powerful explosion in the Universe ever seen. We have explored the properties of the diffuse gamma-ray radiation, which permeates the Milky Way. We see the the Sun, the Moon and the Earth shining in high energy gamma-rays. Our continuous monitoring of the high-energy gamma-ray sky has uncovered numerous outbursts powered by supermassive black holes at the center of distant galaxies.

We were sad to see Steve Ritz leave NASA in July. As project scientist he has overseen the development of all aspects of the GLAST/Fermi mission from before launch and guided the transition into the smoothly operating mission that we have now. I am daunted to be filling such big shoes. Happily, Liz Hays has has joined Dave Thompson, and Neil Gehrels as Fermi Deputy project scientists so we remain at full strength.

We are looking forward to continuing this blog to share mission highlights, science results and interesting operations tidbits.