This week, comments from guest blogger and International Space Station astronaut Peggy Whitson, Ph.D., as she reflects on why it is important to have humans carry out experiments in space.

We do a lot of interesting science on the International Space Station, but the experiments for me that are the most fun are the ones where I get to be more physically involved. Coming from a science background, that is more exciting for me. The InSPACE-2 investigation was actually a lot of fun while on orbit, because it required significant hands on activity to implement the experiment. I had to change the frequency of the electromagnet as it was sending signals and focus the cameras on different views. InSPACE-2 uses an electromagnetic field surrounding a suspension of iron particles in a liquid. Once you add the electromagnetic field, the solution can actually stiffen and form a solid or semisolid structure. This is good for potential applications as shock absorbers for suspension bridges, buildings, etc. 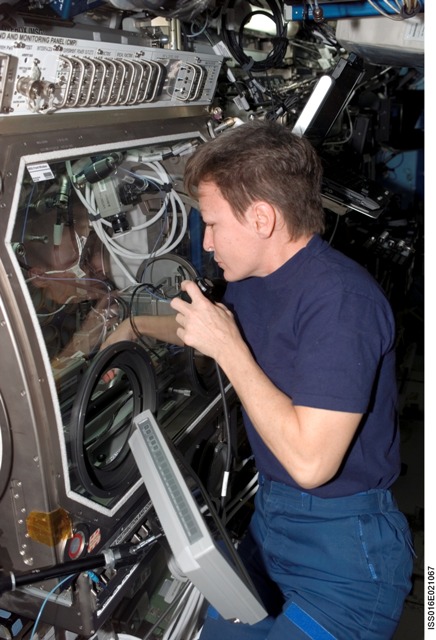 On one occasion, because I have old eyes, I was supposed to set the electromagnet to 20 Hz, but I did not see the decimal point and set it to 2.0 Hz. The experiment was testing a theory regarding the lack of gravity to see if there were any differences compared to ground studies. Since I set up the magnetic field strengths differently than the investigators on the ground had planned, we saw some unusual patterns in the structure. It pulsated, forming moving solid strings. This was interesting for the investigators on the ground, because they had not seen this result at 2 Hz previously. After the investigator told me this, I thought we had to look into things further. Anything that they did not see on the ground that we saw in orbit was of interest in understanding the theories and how these colloidal suspensions work.

After we finished our studies at 20 Hz, we went back and repeated the series at 2 Hz, based on the observed unusual differences. I volunteered some of my weekend time to go back and do this, as I enjoyed the hands on aspect of the experiment. For me, as a scientist, this was really satisfying. I think a lot of scientific discoveries are made as a result of the “I wonder why that happened,” rather than the explicit planned results you might have expected. So even though I screwed something up, it was something that the investigators learned from. The fact that I made an error was what enhanced the investigation.

This type of happy accident can be true in laboratories on Earth, too. Robotically you can perform the planned procedure, but you are not going to necessarily notice any unplanned consequences. Not that humans are always the cause of the unanticipated discoveries, but more interaction can result in different observations or directions that you may take. Observations from a direct crew perspective may not necessarily be noted by investigators on the ground, too, so this is a great way to show crewmember involvement. The more astronauts understand about the objectives of an investigation, the more they can help with those identifications.

There are lots of different payloads that do not work as expected once on orbit, requiring crew interactions; software may need reloaded or hardware jiggled. For instance, in my first flight, I was changing samples out for the Microencapsulation Electrostatic Processing System (MEPS) experiment, which required a huge amount of effort, so much so that I thought I would break it. I think some of the tolerances were not right, and we got the investigation completed only because of extra effort and some brute force. In fact, on the last sample they told me to push as hard as possible to get it in. Had this been done mechanically, you would not necessarily have been able to apply the extra force to complete the experiment and get all the data sets back to the investigators on the ground. There are just little things that do not work in an investigation the way you anticipate.

The Advanced Diagnostic Ultrasound in Microgravity (ADUM) was another favorite investigation of mine that required human interaction. This study looked at whether you could take an untrained crewmember and guide them with ground support and live downlink. The goal was to see if astronauts could obtain viable images for investigators of various different organs; very useful for remote location medical emergencies. This was fun and enabled great interaction with the ground. It was very hands on to manipulate the ultrasound to show the right image for the investigators to see and determine if the images were usable for identification purposes. On Earth, people are now using these techniques to do ultrasounds in remote locations, from the Arctic Circle to athletic arenas.

Being a researcher on the ground has also given me insight about how important it is to be able to actually modify and change your experiment in real time, based on the results you are getting. The human-in-the-loop element gives us that same capability on the International Space Station.

Dr. Peggy Whitson is the Chief of the Astronaut Office and also served as Expedition 5 flight engineer and Expedition 16 commander. She holds a doctorate in biochemistry from Rice University. In today’s blog Dr. Whitson shares her thoughts and experiences as a crewmember and scientist aboard the International Space Station with the readers of A Lab Aloft.

4 thoughts on “Human in the Loop: The Importance of Humans Conducting Experiments in Space”