I’m a Spanish telecommunications engineer, but due to some unexpected turns, I am working with Earth Observation data. For my master’s degree, I wanted to study somewhere other than my home of the Canary Islands, Spain. The interesting option arose of studying the H.264/MPEG4 video compression in New Zealand. However, because of the economic crisis, my “kiwi” plan shattered into pieces and I had to find an alternative. The promised scholarship wasn’t there anymore and my expected stipend disappeared, so I needed to stay at home to complete my thesis. A new variety of choices opened up, and I picked Earth Observation at the International Space University.

The International Space University’s M.Sc includes a 12-week internship. I was familiar with NASA’s MODIS Earth Observation instrument, so when my academic advisor asked me about preferences for my internship, my choice was crystal clear – NASA Goddard, the world’s spearhead of Earth Observation. Eight months later, in mid-May, my adventure started.

I work in building 33, in the Hydrospheric and Biospheric Sciences Laboratory (Code 618). I’m probably the only engineer in a corridor flooded with scientists, which sometimes makes me feel like the odd one out. At first, I felt completely out of my element when they spoke about trees, canopy closure, leave types, topography, and allometry. It didn’t matter though, because I was willing to learn!

The project proposed by my mentor, Ross F. Nelson, had the following description:

The intern would be responsible for using his programming and image processing skills to analyze simulated ICESat-2 LiDAR data in order to identify and delineate the ground, mid-forest-canopy, and top-of-forest canopy traces in the photon ranging data.

This was a completely new topic for me, but seemed quite interesting and challenging. That was all the information I had for choosing my project, which was more than enough for me. I had no doubts; I wanted to go to NASA Goddard.

A couple of months later, when I first met Ross, he presented me with an image like the one shown below: 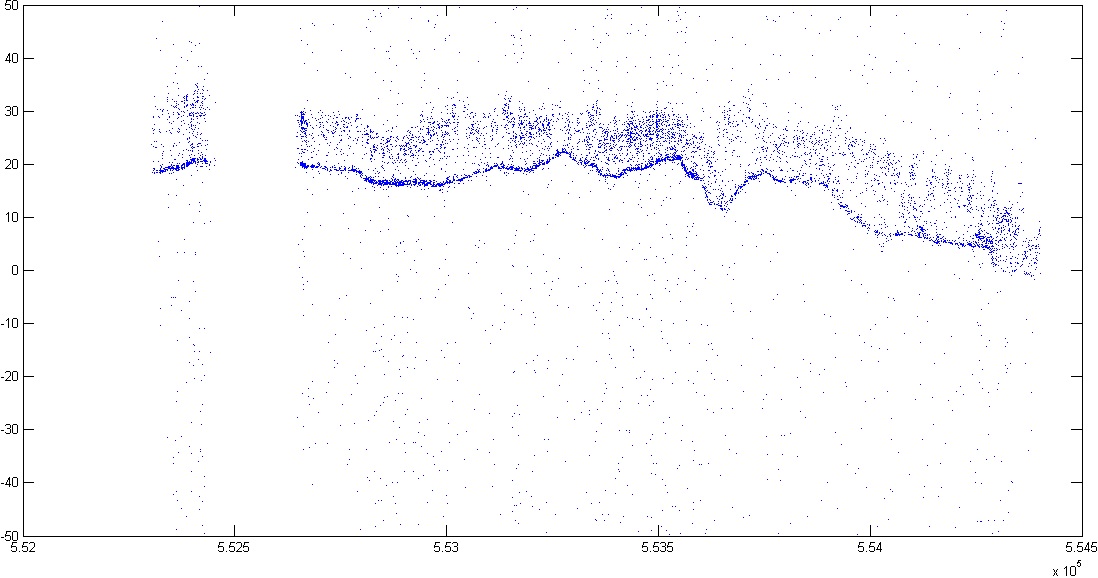 When an untrained person first sees that kind of image, it’s impossible for them to imagine what it might represent. In fact, the dark blue line is meant to show photon ground hits, while the fainter blue blurry dots on top of it are supposed to be trees. After some technical explanation, it starts to make sense.

Below is the same area imaged by an optical satellite.

These two images seem not to any relation, but they are the same area viewed in completely different ways, LiDAR vs. optical.

Almost 12 weeks later and after several issues – data losses, a week without electricity (thanks Maryland derecho!), problems with the bike that I rode to NASA, and days with internet problems at home – I finally managed to come up with something like what’s shown in the image below.

It obviously isn’t doing the job perfectly, but Ross told me a couple of times, “Don’t let perfection be the enemy of the good”.

The experience at NASA has been awesome. Ross has been really supportive and motivating during the whole internship. I surely couldn’t have had a better mentor. Doug, another scientist in the same department who had a group of five interns, always kept me up-to-date about their visits and tours, even though I wasn’t officially part of their group. And Jackie and Jérémy were there whenever needed. It definitely has been a once in a lifetime experience! I’ll surely keep those friendships forever.

All in all, it’s been a pleasure to have the chance to work at NASA Goddard, and it’s something I’ll carry along with me throughout the rest of my life.