Okay, so now you’ve got a great big rocket engine.  What are you going to do with it?  Well, fire it, of course.  Make great big and noisy smoke and fire.  There’s really not much that is more thrilling than an engine test…although, I guess, launches qualify (says the old engine guy reluctantly). 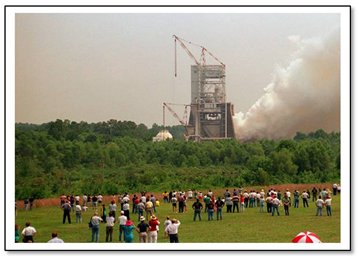 But where are you going to do this?  It’s not like you can do it in your garage.  You’d blow away your entire neighborhood in the matter of a few seconds and the authorities tend to frown on such antics.  Take a look (and listen) again at the video clip from the “What is a Rocket?” blog article to get an idea of what I’m talking about.  Also, it’s not even like you can simply hire a company that specializes in testing stuff and there are many fine companies that do just that for all kinds of products big and small.  No, rocket engine testing is an endeavor that requires its own dedicated facilities and infrastructure.

Over the past fifty years, NASA has developed a number of rocket engine test facilities, but by far the single largest and dedicated site is in southern Mississippi, Hancock County to be exact, today called the NASA Stennis Space Center (SSC).  This facility is just about an hour from New Orleans.  It is in a very secluded, woody bayou area far from any population centers.  And that was the point when it was established.  Given the size of the place needed to test rocket engines and rocket stages and given the noise that such testing makes, having no neighbors is basically a requirement.

Testing for the J-2X engine is currently planned in the “A-Complex” test area.  That area is composed of three test stands.  There are stands A1, A2, and A3 (no, it’s not an especially colorful naming scheme, I admit).

Stands A1 and A2 were designed to look like and function like the large test stand here at the NASA Marshall Space Flight Center.  They were built in the 1960’s and were originally stage test facilities to accommodate testing of the S-II stage, the second stage of the Saturn V launch vehicle that took humans to the moon.  The S-II stage was, of course, powered by the original J-2 rocket engine.  Then in the early 1970’s, these two stands were converted into single-engine test stands to facilitate the development of the Space Shuttle Main Engine (SSME).  Test stand A2 remained dedicated to SSME up until last year.  Test stand A1 over the last thirty-five years was used primarily for SSME, but it was also used in the late 1990’s for the XRS-2200 linear aerospike engine development (which used a number of heritage J-2 and J-2S component designs) intended to support the X-33 vehicle. 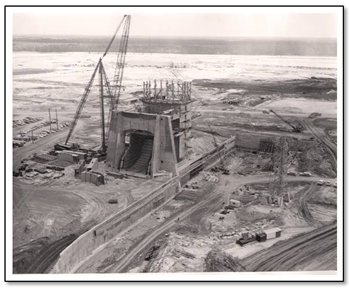 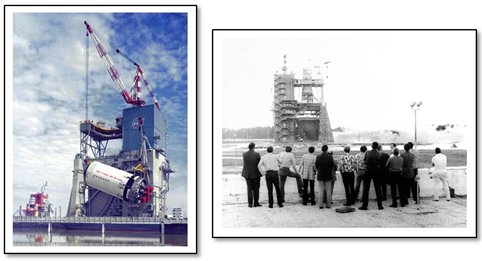 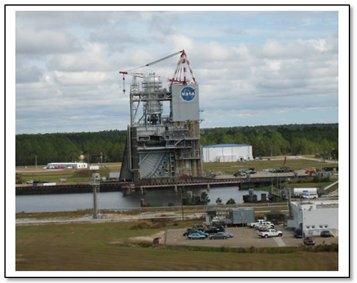 Test stand A3 is a new facility currently being built specifically to accommodate development of the J-2X engine.  It is unique in that it simulates the atmospheric pressures at high altitudes.  Because the J-2X is being designed for maximum performance and for engine start at high altitudes, it is only within such a test facility as A3 that the complete configuration of the J-2X engine can be tested.  The altitude simulation capability is produced by encapsulating the entire engine within a test chamber and using a system of steam ejectors to “suck down” the chamber using the Bernoulli effect familiar to students of fluid dynamics.  Basically, what you have on A3 is a series of rocket engines, powered by liquid oxygen and alcohol, used to make a huge amount of high-velocity steam that creates a low-pressure environment into which the J-2X fires (itself also making a huge amount of steam).  When A3 is up and running, the J-2X testing conducted there is going to be even more impressive than the usual engine tests. 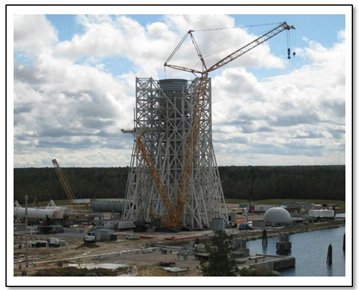 Test Stand A3 Under Construction Today

Within the last month, I had the opportunity to tour NASA SSC and see the progress of the work being done on these test stands to support the J-2X test campaign.  Below are a series of photos with some accompanying commentary. 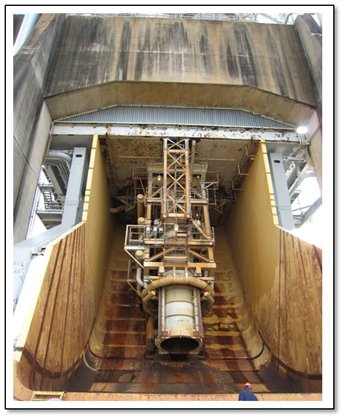 Above is a picture looking up and into the flame bucket on Stand A2.  To give you an idea about dimensions, notice the person in the blue jacket and orange hardhat down on the right-hand wide.  During an engine test, this entire area is deluged with water for the purposes of cooling and sound suppression.  The flame bucket diverts the rocket exhaust from shooting downwards to shooting outwards and away from the stand.  The long tube-like structure in the middle is a feature unique to Stand A2.  It is a passive diffuser that creates simulated high-altitude conditions while the engine is running.  The difference between this passive diffuser and the active diffuser on A3 is the fact that A3 can simulate higher altitudes and can do so even when the engine is not firing. 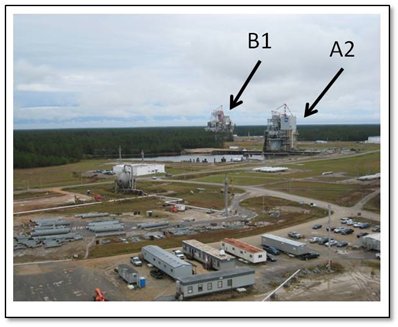 This is a shot taken near the top of stand A3.  They have not yet built in the elevator so I know firsthand that the walk to the top is just about 23 flight of stairs, give or take a couple.  I’ve marked stand A2 and also stand B1, which is currently used for RS-68 engine testing that supports the Delta IV launch vehicle.  Stand A1 is off to the left, out of the frame of this picture.  The low white building in the middle of the picture is the control room from where they conduct engine tests on A1 and A2.  The control room for A3 will be in a different building. 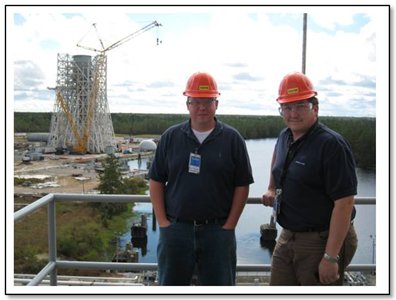 Above is a picture of Jason Turpin (Liquid Engine Systems Branch, ER21, NASA MSFC) and Rick Ballard (Upper Stage Engine Element Systems Engineering and Integration Manager) standing on the Level 5 deck of stand A1 with the A3 construction site in the background.  The water that you see behind them is part of a canal system that runs throughout the test area.  On these canals they bring in barges filled with the propellants used for the testing.  Back in the day, these canals were used to float in the assembled Saturn stages.  This is not, however, necessary for engine testing since a single engine can be loaded onto a truck.

Overall, this tour of the facilities showed that NASA SSC is making tremendous progress in getting the test stands ready for the J-2X development test series campaign.  In only a few months, we will be making smoke and fire (mostly steam!) and rumbling the acres of swampy woodlands that surround the site.  I can hardly wait!