Welcome back to the J-2X Doghouse.  The last time that we met here, we discussed the fundamentals of what exactly makes something a rocket.  As I explained, on the conceptual level, rockets aren’t really “rocket science.”  You get the propellants together, light them on fire, and eject them out the back end of the vehicle.  Simple enough.

Okay, but how do you move that much propellant and make that much smoke and fire, enough to propel something as big as, say, the Saturn V that was over 300 feet tall and weighed millions of pounds?  That’s where things get interesting and technically difficult.  As I said before it is all a matter of power. And to get power you use an engine.

What makes a rocket engine an engine is the fact that it contains more than just a combustion chamber where the propellants mix.  It is an arrangement of machinery that, once started, feeds and powers itself.  During operation, a rocket engine uses some cycle – some circuit of piping and thermodynamics and combustion and valves and control system and rotating machinery – to keep itself up and running and generating thrust.

Think about your car engine.  You turn the key, the engine gets up and going, and then it can sit there for hours idling, running happily all by itself, converting gasoline and air into mechanical energy, with no additional input from you.  You don’t have to manually pump the gas into the injectors (or the carburetor).  You don’t have to plug it into an outlet to feed it more electrical energy.  It’s self-sufficient until you turn it off or until you run out of gas.  That’s what truly makes it an engine.  It’s similar with a rocket engine except that the product is not mechanical energy; the product is very fast moving gases generating lots of thrust. 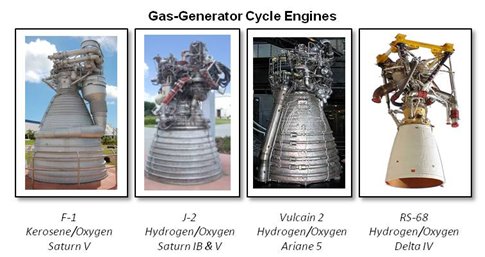 For rocket engine conceptual design, in terms of making it an engine, the goal is always, “How do you keep the pumps pumping?”  These are extremely powerful pumps moving lots and lots of fluid, so you need some powerful energy source to drive them.  The answer is to use what you’ve already got in the engine: the propellants.  There are different ways to do this and thus you have different engine “cycles,” i.e., component arrangements.  The most common rocket engine cycles are the gas-generator cycle (examples include J-2X, J-2, F-1, RS-68, and Vulcain 2 – see pictures above), the expander cycle (examples include RL10 and Vinci), and the staged-combustion cycle (examples include Space Shuttle Main Engine and RS-170/180).  In addition to these, there are many other cycles and variations as well.  Each different cycle has advantages and disadvantages and, usually, constraints linked to physics.  Choosing the right cycle to fit the mission application is generally the first decision that an engine designer has to make.  Because this is a blog dedicated to J-2X, I will focus on the gas-generator cycle engine.

Ideally, what you would want to do with a rocket engine is use all of your propellants in as efficient manner as possible meaning that you would want to use all them in the production of thrust.  In a gas-generator engine, however, you concede right up front to a loss of some efficiency to achieve greater engine simplicity.  You use a certain amount of the propellants brought into the engine almost entirely to keep the engine running rather than for generating thrust.  In practice what this means is that you have a separate, small combustion chamber within the engine that does nothing but produce gases to drive the turbines connected to the propellant pumps.  As compared to the large quantities of propellants being pumped through the whole engine, the amount going to the gas generator is small (less than 3% for J-2X), but once used to drive the turbomachinery, the exhaust is drained of much of its thrust-generating energy.

Below is a simplified schematic of a gas-generator cycle rocket engine like the J-2X.  The propellants, liquid hydrogen (fuel) and liquid oxygen (oxidizer), enter the engine and go immediately into the pumps: the fuel turbopump (FTP) and the oxidizer turbopump (OTP).  There, the mechanical energy of the spinning pumps is turned into high pressures in the liquid propellants. 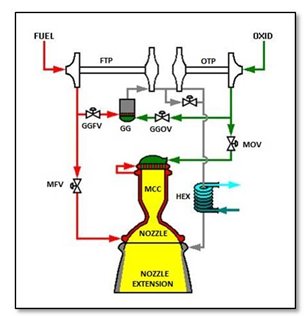 After exiting the pumps, a small amount of each propellant is tapped off to supply the gas generator (GG).  The GG is, in essence, a small rocket engine embedded within the larger rocket engine.  It makes hot, high-pressure combustion products, steam and gaseous hydrogen, that are used to drive first the turbine connected to the fuel pump and then the turbine connected to the oxidizer pump.  After driving the two turbines, this still-warm gas is used first to warm the helium flowing through the heat exchanger (HEX) that is used to pressurize the oxygen tank of the stage and is then dumped along the walls of the nozzle extension to keep that relatively cool.  The video below is a component test of the J-2X GG performed at NASA MSFC.  Even with the relatively small amount of propellant that the GG burns, an enormous amount of energy is released to drive the turbopumps.

The rest of the liquid oxygen coming out of the oxidizer pump, meaning that which is not going to the GG, is directed through the main injector and into the main combustion chamber (MCC).  The main injector is analogous to a fuel injector in a car engine except that here it injects two propellants through hundreds of injector elements.  The effectiveness of this injection and the mixing of the propellants are crucial for overall engine performance.

The hydrogen circuit after the fuel pump is more complicated.  This is because the hydrogen is used to cool the nozzle and combustion chamber walls.  The walls of these two components are essentially hollow.  They contain hundreds of passages for the hydrogen to flow thereby keeping the walls from melting due to the extreme high temperatures of the contained combustion zone.  After doing its job as coolant, the hydrogen is then directed through the main injector and into the MCC.  Not shown on the diagram is the fact that a very small amount of the warm hydrogen gas is tapped off prior to entering the main injector and is routed back to the stage to pressurize the hydrogen tank (like the helium through the HEX on the oxygen side).

It is in the MCC where the mixed hydrogen and oxygen combust to make steam and residual hydrogen gas.  The temperature of that combustion is approximately 6,000 degrees Fahrenheit and in the J-2X the pressure is approximately 1,300 pounds per square inch.  These combustion products are then accelerated to sonic velocity at the converging throat of the MCC and then to supersonic velocities down the diverging nozzle and nozzle extension.  As discussed previously, it is the high-velocity expulsion of these hot gases that produces thrust.

Note that the turbine exhaust gases dumped along the nozzle extension still generate some thrust, but not as effectively as the combustion products that are accelerated through the nozzle throat.  This loss of effectiveness is the price that you pay for this relatively simple engine cycle.  As a comparison to a more complex engine cycle, do a web search for the schematic for Space Shuttle Main Engine (SSME).

So that’s how a gas-generator cycle engine like the J-2X works.  As this blog continues and as we head towards testing next year, I will continue to report on the progress of the components that make up the engine.

9 thoughts on “Inside The J-2X Doghouse: The Gas-Generator Cycle Engine”