My background is analytical modeling.  There are all kinds of modeling in use today, including some extraordinary computational fluid dynamics and structural dynamics work that is amazing, but back when I did more hands on work I did zero/one-dimensional, system-level modeling of fluid systems, thermodynamics, and heat transfer.  Rather than looking at the micro-level, my work was usually a step back at the macro-level.

I’ve told you all that because, over the years I found that one of things that I found most challenging and most enjoyable to model is combustion devices.  Take the main combustion chamber (MCC) as the prime example.  Its job is to contain the combustion, squeeze the combustion products to sonic velocity, and then direct them towards the nozzle.  It’s just a big, hourglass-shaped tube.  It all sounds simple until you realize that those combustion products are at about 6,000 degrees Fahrenheit and, for the J-2X, at a pressure of over 1,300 pounds per square inch.  How it is that the MCC doesn’t melt or burst – or both – is amazing.

So, let me tell you a little about MCCs.

The only way to build one where the walls don’t melt during operation of a large liquid hydrogen / liquid oxygen engine is to actively cool them.  This means flowing cold hydrogen inside the walls.  On one side of the wall you have combustion 6,000 degrees and on the other side, you have hydrogen that is typically entering at less than 100 degrees above absolute zero.  Now you see why this is a delight for someone who enjoys modeling thermodynamics, fluid flow, and heat transfer. 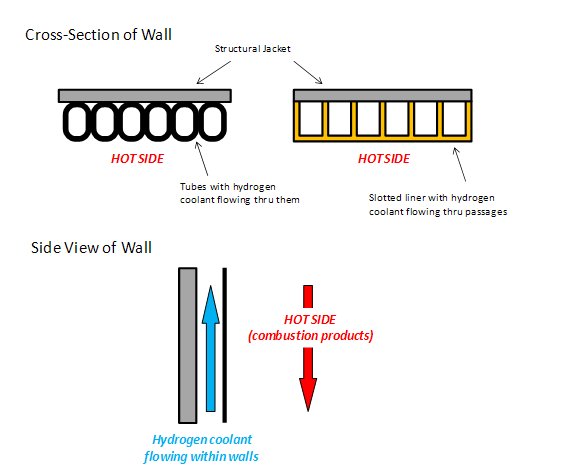 How do you make walls that allow for active cooling? Well, years ago, back during the era of the Apollo Program the walls were made of tubes. They took a whole bunch of tubes, bent them into the profile shape of an MCC, stacked them up into a circular pattern, lay in or pack in binder metal, and then brazed them together. Brazing is essentially a welding process where you stick the whole thing into an oven, make it really hot, and the thing melts together (as someone who enjoys cooking, I tend to think of it kind of like a stiff metal stew). In this case what melts together is binder metal stuck between the tubes so that when you take it out of the oven, you’ve turned several hundred tubes into a single piece. Note that the regeneratively-cooled portion of the J-2X nozzle is made in this manner using tubes, but when doing this with an MCC where the pressures are higher and the temperatures are hotter: we’ve advanced a long way since the 1960’s.

First of all, in order to make the tube-wall MCC structurally sound, you were kind of forced to use steel tubes (steel of some sort at least). What you’d really like to use is something like a copper alloy that has higher thermal conductivity properties. Copper tubes might be possible, but you would have to put behind them a steel support structure, a jacket of some sort. That, however, introduces potential issues of hot stuff or high-pressure stuff seeping behind the tubes and causing all kinds of problems including catastrophic failure of the engine. The hourglass geometry required for the combustion products flow path complicates nearly all of the structural issues. 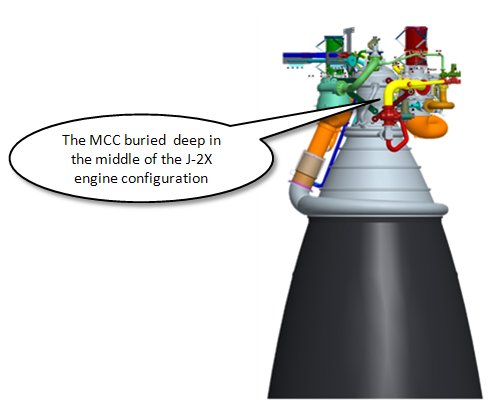 Then, along came the development effort for the Space Shuttle Main Engine (SSME).  Here you’re dealing with MCC pressures over 3,000 pounds per square inch so you needed a whole new approach since tubes just weren’t going to cut it.  What they came up with, conceptually, is the same thing used by J-2X and most other large rocket engines, although the means for fabrication vary.  They used a liner and jacket concept.  The liner replaced the hundreds of tubes.  It is a single piece with the hourglass shape within which the combustion takes place.  Around the liner is fitted a structural jacket.  Thus, the liner can be made of something like a copper alloy to deal with the heat transfer issues and the liner can be made of some steel or nickel alloy to deal with the structural issues.  Where before the tubes provided the coolant flow path, here groove are cut into the backside of the liner so that when the liner and the jacket are fit together, these grooves become channels.  Ta-da!

The first step in manufacturing an MCC involves hot spin-forming a copper-alloy forging.  The resulting piece is then machined to a precise contour.  The liner is then slotted, meaning that the grooves for the coolant flow passages are cut into the backside away from where the combustion products will flow past. 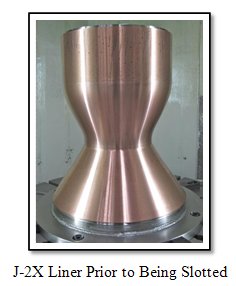 The really tricky part about this kind of MCC is making the whole thing fit together and stay together given the different metals being used.  The different metals have different properties and different structures at the micro level so a variety of methods including electro-plating and brazing and welding methods are used to make a single unit.  It is these details that are proprietary and export-controlled technologies that cannot be revealed but that make the whole thing possible.  Luckily, this humble analyst knows little about metallurgy so there is almost no danger of me exposing something useful-but-sensitive to the world at large.  In the past, developments for methods of producing a robust bond between the liner and the structural jacket resulted in cheaper, more reliable, yet heavier design.  The J-2X design, however, has allowed for significant weight decreases by optimizing the design for post-bond machining. 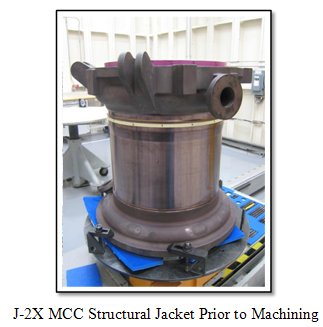 Another recent innovation in MCC fabrication, and one being pursued for the J-2X MCC design, is the use of castings for the manifolds that distribute the coolant to the flow passages and collects the coolant at the end of the passages.  These pieces of hardware see very high fluid pressures due to their function as manifolds but also are used by a number of other components for structural mounting into the engine system.  Thus, they are heavy and complex pieces.  In the past, the typical practice was to machine these parts out of wrought forgings.  The J-2X cast manifolds offer a significantly more cost efficient way to produce these parts. 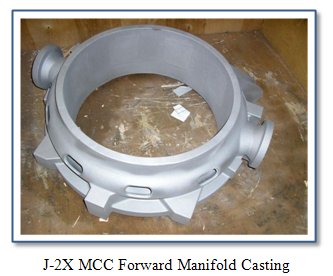 The MCC for the first J-2X development engine is currently planned to complete fabrication in early February 2011.  All of the major parts for the second MCC are already in work including the manifolds, the liner, and the jacket.  It is slated for completion in July.  So now, analytical modelers, like me, will just have to sit back and wait for the testing to commence in a couple of months.  Then the process of reconciling models to test results, understanding the clash of approximations and standard correlations and actual, particular physics, starts in earnest.  That’s the truly fun part!

4 thoughts on “J-2X Progress: The Main Combustion Chamber — the Heart of the Fire”