Finally, it has been discovered: Proof that rocket engineers can indeed have a sense of humor.  This is an exchange that actually happened in a meeting here at NASA not too long ago.

Manager #1: What are those feedlines made of?
Manager #2: Really shiny metal.

Translation: He didn’t know, but he would find out.  Okay, so it’s not Saturday Night Live material, but it was funny in context.  (You had to be there…really.)

The truth is that we use lots and lots of different kinds of shiny metal in all kinds of strange shapes, under all kinds of severe conditions, and with uncompromising standards against failure.  We use aluminum and steel and titanium and copper alloys and nickel-based super alloys and, sometimes, rare earth metals and precious metals.  We cast it, forge it, roll it, spin it, weld it, you name it.  Suffice it to say that if you like or know something about metal working or machining or welding or metallurgy, then even if you haven’t got a clue about rockets, we’ve probably still got a place for you.  It’s a fascinating field that ranges from enormous factory tooling necessary for large structures production all of the way down to microscopic crystal formations deep within the parts being produced.

Now, the pursuit of new technology demonstrations has never been a primary objective for the J-2X development effort.  We are supposed to make it work – that’s the prime directive.  However, in the course of J-2X development, we came across a situation where we were forced to consider innovative solutions and, from that consideration, identified an opportunity to pursue something really pretty cool and it has to do with shiny metal. 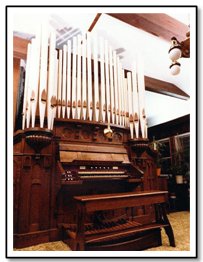 So let’s start at the beginning.  In order to avoid combustion instabilities in the gas generator assembly, we found that we needed a very short gas generator discharge duct.  What is a combustion instability?  In this case, think of a pipe organ.  The size of the pipe determines the pitch.  Big pipes make big booming sounds.  Little pipes make little whistling sounds.  What we found through component testing was that the pipe connected to the gas generator was acting like a pipe from a pipe organ and the sound was so big and so loud that it had the potential of ripping the whole thing apart.  To find a place where we were de-tuned from the booming loud vibrations, we had to make the pipe quite short. 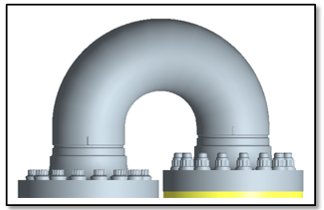 Now, though, we had a problem.  We had a duct so short that it basically looks like a U as pictured in the drawing above.  Note, however, that the unit used on the engine is welded on one end and flanged on the other.   This picture is a drawing of the test configuration.  But regardless of the flanges and such on the ends, this part is basically U made out of very high-strength “shiny metal” (a nickel-based super alloy).  Given the diameter of the tube, the strength of the metal, the thickness of the walls, and the fact that we can’t allow the walls to get too thin from bending, we had a devil of a manufacturing situation for what looks like, on the surface, a relatively simple component.  So, we (and that’s the big “we” of both NASA and our prime contractor, “Pratt & Whitney Rocketdyne”) started looking for solutions.

Below is a picture of the baseline solution illustrated with a manufacturing demonstration unit.  Rather than trying to do the whole bend in one piece, it is done in three pieces, each with a 60-degree piece of the overall 180-degree bend.  Those three pieces are then welded together; the end pieces are trimmed back; and the flange is welded on the end.  It works.  But it is labor intensive with all that welding and with all of work that comes along with welding along the lines of inspections and re-work cycles.  To give you an idea of size here, the duct is 3.5 inches in diameter so it is a healthy hunk of metal. 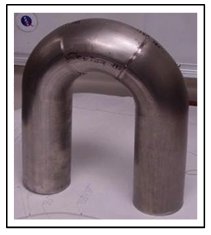 In addition to the baseline solution, another solution was proposed.  It’s called “Direct Metal Laser Sintering” or DMLS.  The company that does this is called Morris Technologies (look them up!).  And, like most high-tech stuff, if I knew the nitty-gritty details I wouldn’t be able to share them, but I can tell you the basics.  First, you start with a whole bunch of very fine metal powder.  Next, you load into the computer your three-dimensional CAD model for the part you want to make.  The CAD model is analytically cut into thousands of horizontal slices.  Then, in a special, automated chamber, a thin layer of metal powder is laid out and fused by a laser into the shape of the first slice of from your CAD model.  Then another layer of powder and fused slice is added, and then another, and then another.  With each slice, a layer of powder is laid out and fused to the previous layer precisely duplicating your CAD model a little bit at a time.  So, any shape that can be decomposed into and built up from a series of thin layers can be made.  Below is a picture of a small pump impeller with a relatively complex geometry that was made by Morris Technologies using this process. 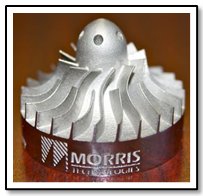 Ignoring how it works, you’ve got this:  you put in your computer model; you put in the powder; come back a week later; and, your part is cooked (actually there are post-process surface finishing operations, but that’s just a minor detail).  It’s almost like something from The Jetsons cartoon series.

So, we asked, can you make our U-shaped tube?  The answer was: almost.  The size limitations of the existing chamber dictated that we could do the whole tube part but the flanges would have to be welded on.  Still, it’s a pretty good demonstration.  Below, you can see a couple of pictures of the finished part. 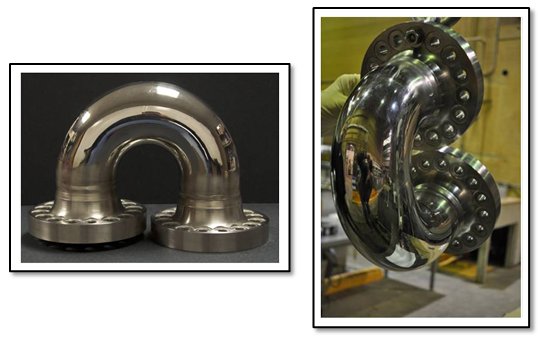 Here is the big deal: making it was very cheap and very fast.  Of course, cheap isn’t always helpful if the thing doesn’t work.  So, we have to prove that it works.  Towards that end, we are performing materials properties tests on samples made in the chamber simultaneously with the duct, we are doing non-destructive evaluations of the duct itself, and we plan to incorporate it into a component level test series of the workhorse gas generator.  Below is a kind of creepy picture of the duct after it was inspected for tiny flaws using a fluorescent penetrant solution and ultra-violet light. 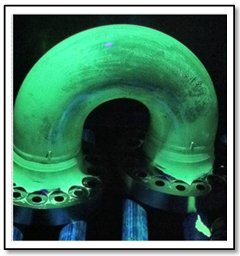 Because of the severe environments that this duct will see, the material properties throughout the duct have to be consistently good.  There can’t be any flaws on the surface that could lead to the development of cracks.  So far, the piece has come through all of the inspections with flying colors.  The next step will be actual hot-fire testing.  Below is a photograph of previous testing of the workhorse gas generator. 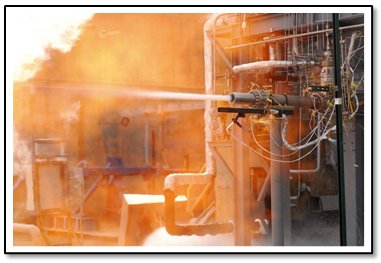 If everything goes well and post-test inspections show that the part did not sustain damage, we will have taken a huge step towards making this fabrication approach viable for not only this particular piece of the J-2X engine, but for all kinds of parts on all rocket engines in the future.  There are technology issues to overcome – notably current limitations on the size of the parts to be made – but this process is potentially an order of magnitude improvement in terms of the costs for building complex, severe environment components out of that ubiquitous substance that we’ve got all over in a rocket engine, i.e., “shiny metal.”