Okay, before I even get to the subject of thrust balance, I want to report that J-2X development engine E10001 got back into the stand and that the next test, A2J006, was conducted.  The test went the full planned duration of 40 seconds and the issues that caused us to remove the engine after the previous test all appear to be fixed.  In other words, it was a complete success.  Here’s a video for your viewing pleasure:

Now, speaking of issues on E10001 that appear to be resolved, I want to talk about turbopump thrust balance.  While I hadn’t previously mentioned it, the data from the first several tests showed that there was a thrust balance issue with the oxidizer turbopump (OTP).  So, that naturally leads to the question:  What is “thrust balance?”

Here is a crude drawing of a turbopump for this discussion (And, please, save your cards and letters telling me that I am a terrible artist.  I will already catch plenty of grief from the turbo guys over this drawing.).  The arrows are intended to illustrate fluid flows. 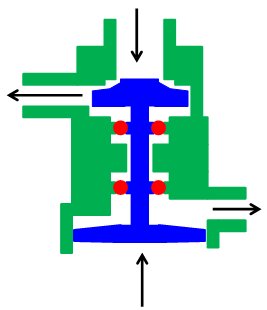 I’ve drawn this in three colors because a turbopump can be thought of as having three fundamental elements.  The first element, the one in blue, is the part that spins.  This is the rotor onto which is attached the pumping stuff (i.e., the inducer and the impeller) on the pump side and the turbine stuff (i.e., the disks and blades) on the turbine side. 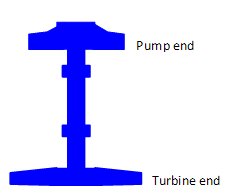 The second element, shown in green, is the part that doesn’t spin.  This is the housing.  It is the shell within which the rotor spins.

The third element, shown in red, is the bearings.

Whenever you’ve got one thing spinning and another thing stationary, you’ve got to have some way of communicating between the two pieces.  Maybe the rotor just spins and slides around in some kind of restraint holding it in place.  Well that might work except that you can’t put grease into a cryogenic oxygen environment and, should too much heat build-up due to friction, then you’ve got a very combustible situation.  Mix heat with a pure oxygen environment and anything and everything will burn, including metal.

What we do instead is typically use ball bearings between the rotor and the housing.  In some other pumps we use roller bearings that look like little cylinders rather than little balls, and there are other solutions as well.  These bearings do two things, they allow the rotor to spin and they hold the rotor in place.  So they need to be loose enough to spin yet tight enough to maintain control of a heavy hunk of metal spinning at over 10,000 rpm.  How much force the bearing put on the rotor to maintain control and, conversely, how much the rotor puts back on the bearings is called the bearing load.

When you are designing a turbopump, you design it so that the bearings have a specific load, and that means more than just a value, it also means a direction as shown in the sketch above.  You design the whole bearing package assuming that you know the magnitude and direction of the forces loaded through the package.  This then allows you to do some calculations that tell you, “Yep, I’ve got the rotor properly and sufficiently controlled.”  Those calculations are part of what is often referred to as rotordynamics (and, by the way, NASA MSFC has some of the world’s best experts in that area).

Question: How do you get different bearing loads in a turbopump?  Answer: Pressures.

Here is a nifty little fact: Pressure is all around us.  We don’t feel the atmospheric pressure of 14.7 pounds-force over every square inch of your body because, well, it’s always been there.  That’s the environment within which we’ve evolved.  Now, go to the bottom of the ocean and you’ll find a whole other pressure environment, one that would crush our delicate bodies into mess.  The basic principle to remember is this: Pressure applied over an area equals force.

Within a turbopump, you are explicitly manipulating pressure.  That’s the whole purpose of a pump: to move fluid through the use of pressure.  So, in the pump end you have a low pressure coming in at the inlet and a very high pressure at the outlet.  On the turbine end, it’s the opposite since on that end you’re extracting energy (and therefore pressure) from the fluid.  So, on the turbine end you have high pressure at the inlet and lower pressure at the outlet.  Thus, throughout the turbopump, you’ve got pressures of all sorts and those pressures are pushing on the different pieces of the rotor.  This means that you’ve got all kinds of forces pushing on the rotor.  Some of the forces push the rotor towards the turbine end.  Some of the forces push the rotor towards the pump end.  Getting the right balance of forces is called your thrust balance.

So, what’s the “right” thrust balance?  It is the one to which you’ve designed your bearings.  You design your bearings to have a certain load and a big part of that load is determines by the thrust balance on the rotor.  So, if your thrust balance is off, i.e., not what you intended, then your bearing loads are off and you’re therefore not controlling the rotor the way that you wanted.  In the worst of circumstances, an out-of-control rotor represents a catastrophic situation.  In less-than-worst circumstances, operating with a thrust balance significantly different than the design intent could lead to unexpected wear on components and therefore limited operational life.

The next question is this: How do you create the thrust balance that you want and need to accomplish all this?

That’s a matter of designing the internal guts of the turbopump and analytically modeling all of the internal flows within these guts.  In addition to the big flows coming into and out of the pump and turbine, you’ve got internal flows around seals, between pump or turbine stage, and through the bearings (as coolant).  When operating, the whole turbopump is full of fluid.  And, everywhere you have fluid, you have a pressure; and everywhere you have pressure applied to an area, you have a force.  So you calculate pressure drops through small passages or through seals and figure out a whole detailed map of different pressures and forces throughout the whole unit and you can understand your thrust balance.  And then, as necessary, you manipulate your clearances and seals and passages designs until you achieve the thrust balance you need.

Getting back to the E10001 OTP, what appears to have been the issue was that we had some seals that were too tight.  The tight seals overly restricted internal flows and, basically, messed up the intended force balance on the rotor.  This could be seen in the data collected from the testing.  Remember when I said several articles ago that this engine is instrumented to the max so that we can learn all about how it is working.  Here is a case where special instrumentation identified an issue.  The interesting part is that these seals were kinda sorta fine in terms of design but the processing of the material of which they are made — it feels like hard plastic — was not quite refined enough so that when subjected to operational conditions it changes dimensions and actually tightened up.

Prior to test A2J006, while we had the engine out of the stand, our contractor Pratt & Whitney Rocketdyne was able to partially disassemble the engine and the OTP just enough to change out the seals in question and then get the whole thing buttoned up and ready for test in record time.  They truly did some excellent work here.  And the success of test A2J006 is the proof!

When last I discussed with y’all the status of testing on the first J-2X development engine, E10001, I showed you a video of our first mainstage test, A2J003. That article was posted just over a month ago. So, what’s been happening since then? Hopefully, this brief article will catch you up to where we are.

First, we had test A2J004 in early August. This test went the full, planned duration of 7 seconds. This was our first test with any sustained duration at mainstage conditions. Lots and lots of good data. The Datadogs and the analysts were absolutely giddy for days and days afterwards.

We then had test A2J005 in mid August. This test was scheduled for 50 seconds duration but it was cut off at 32.2 seconds due to a not-totally-unexpected redline cut. This redline cut was similar to the one described for A2J003. In fact, it was the same parameter although the test conditions were different. You can stomp your foot, or kick at the air, moan, whine, whatever; it doesn’t really make any difference (…which is not to say that we did any of this … well, okay, maybe a little whining…). This is all simply part of the learning process with a new engine. It is expected, necessary, and educational. Deep breath and all is well.

However, after test A2J005 shutdown — several seconds after shutdown — we had a “pop.” These are not uncommon when ground testing rocket engines so let me use yet another automobile analogy (since I use them so often) to explain.

Just a few years ago, I was still driving my 19-year-old pickup that I bought just before grad school. Towards the end of its long and glorious life, my little red truck developed a habit of rumbling and grumbling to a stop long after I’d turned the key to “off.” Residual gasoline fumes and air and hot metal combined into a sequence of “blurrr, blurrr, cough, cough, blurrr … POP” (and the neighbors just loved that!). In essence, a similar thing happened on A2J005. 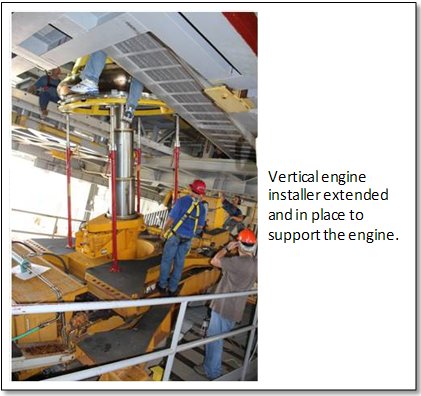 In flight, the shutdown environments are quite different than on the ground. When you’re way, way up in the atmosphere — or even outside of the atmosphere — the surrounding environment is effectively a vacuum, which is a very useful means of sucking out any residual propellants from the engine after shutdown. On the ground, residual stuff (leftover propellants and fuel-rich combustion products) doesn’t get pulled out as efficiently. We can and do push it out with inert gas purges, but they’re not always as effective as we’d like. And so, on A2J005, we didn’t get everything pushed out as well as we’d like and we had a “pop” — or, actually, a “POP.” Technically speaking, it was a detonation in the “lox dome,” i.e., the oxidizer manifold volume feeding the main injector. 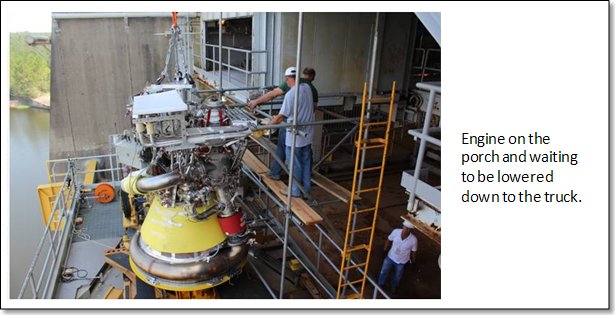 The bottom line is that we had some damage. It wasn’t anything that couldn’t be fixed and so, we’re fixing it. We didn’t bend any metal or anything like that. It’s more of breaking something that’s kind of like really tough plastic. Throughout this article you’ll see pictures of the engine being pulled out of the test stand because we couldn’t do the repair in place. After removal, we then took the engine back across the NASA Stennis Space Center to the assembly facility. In other words, we took it back to the garage for a tune up and we’ll be back in business soon. In fact, E10001 will be reinstalled by mid-September and we’ll be back into testing right around the start of October. Oh, and we’ll be doing a better job of avoiding pops based on what we’ve learned about purge rates and durations. 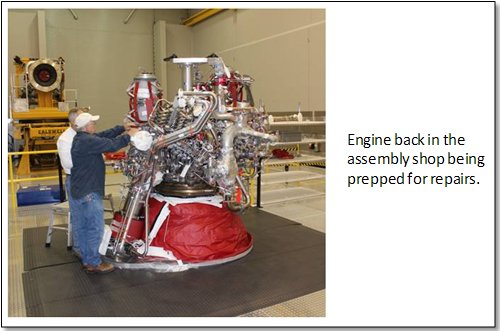 So, that’s where we stand. Two things to look forward to in the future: first, the upcoming report on test A2J006 after it happens, and, second, a discussion of another change we made to the engine while we had it in the shop. That latter discussion is an interesting technical tidbit regarding the internals of turbomachinery. So, “Don’t touch that dial!” and keep your set tuned to this station… 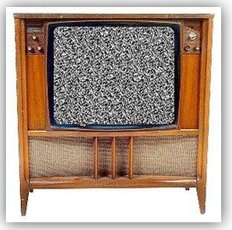 (I think that my grandparents had this exact set! Ahh, the good old days of vacuum tubes and horizontal hold.)