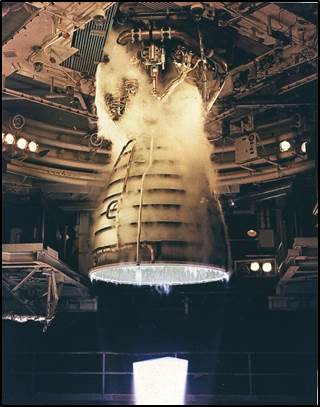 The first rocket engine test that I ever saw in person at the NASA Stennis Space Center in southern Mississippi occurred well over twenty years ago.  I’d already been doing test data analysis and power balance analysis in support of the Space Shuttle Main Engine (SSME) Project for some months.  I had made several data review presentations in front of then chief engineer (and rocket engine legend) Otto Goetz.  I could quote engine facts, statistics, and tell you all about how the SSME worked.  I’d even seen some videos of engine tests.  But it was not until I saw a test in person that I achieved the state that can only be described as awestruck. 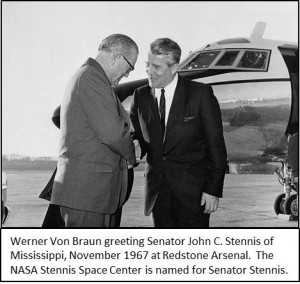 It was late in the evening and a little chilly.  Though we’d arrived at the control center before dusk, test preparations had dragged on so that now darkness had enveloped the center.  The test stand stood out against the blackened sky like a battleship docked in the distance.  Brian, my team lead at the time with whom I’d driven down from Huntsville, and I were standing outside in the control room in the parking lot.  The radiation from the hydrogen flair stack off to our left warmed one side of our face as the breeze cooled the opposite cheek.  The wailing of the final warning sirens drifted off and all that could be heard was the burning torch of the flair stack and, in the distance, the low surging and gushing of water being pumped into the flame bucket.  We were a just a couple of hundred yards from the stand.

Then, the engine started. 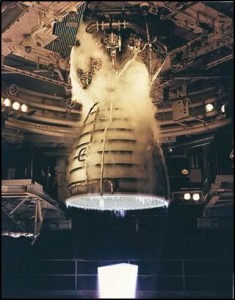 First, there is the flash and then, quickly, the wave of noise swallows you where you stand.  Unless you are there, you cannot appreciate the volume of the sound.  It is not mechanical exactly.  It is certainly not musical.  It is not a howl or a screech.  It is, rather, a rumble through your chest and a shattering roar and rattle through your head.  You think instinctively to yourself that something this primal, this terrible must be tearing the night asunder; it surely must be destructive, like a savage crack of thunder that continues on and on without yielding.  You are deafened to everything else, deprived of hearing because of all that you hear.  Yet before your eyes there is the small yet piercing brightness of the engine nozzle exit that can just be seen on what you know to be deck 5 of the stand and, to the right, there are flashes of orange flame stabbing into the billowing exhaust clouds mounting to ten stories high, tinged rusty in the fluctuating shadows.  It is like a bomb exploding continuously for eight minutes and yet the amazing thing, in incongruent fact so difficult to grasp as you are trying to absorb and appreciate the sensation is that the whole event is controlled and contained.  You cannot believe that so much raw power can be expressed by what is only a distant dot within your field of vision.

This is an experience that I wish everyone could have.  There are so many extraordinary feats of engineering all around us that we can appreciate and admire, but nothing for me has ever been as visceral as seeing an engine test, especially at night, with the nozzle open to the night air (and not buried in a diffuser).  No engine schematic or listing of characteristics or series of still pictures is an adequate substitute for the majesty of that controlled power.

Since that first test, I’ve seen any number of other engine tests including SSME (what we now call RS-25), a couple of other, smaller engines, and, of course, J-2X.  But it was not until the end of June of this year that I again had the opportunity to see a nighttime test on NASA SSC test stand A1.  This was J-2X E10002.  Below is the video, and it’s really cool, but I wish that you could have been there, standing beside me in the parking lot.  Listen carefully to the end of the recording and you’ll hear people cheering.  I was amongst the appreciative, awestruck chorus.