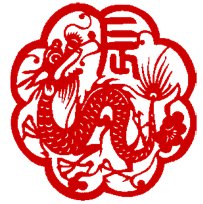 The same is true for J-2X.  Last year was momentous for our project.  We assembled and tested our first development engine, E10001.  We celebrated and received well-deserved (if I do say so myself) kudos and pats on the back.  But now things move on and the life of our good friend E10001 enters its next phase.  And the next phase for E10001 involves changes to its nozzle configuration.  So, before I tell you specifically what we’re doing to E10001, we need to discuss how a supersonic nozzle works.

Below is a schematic of what, on a rocket engine, would be called the thrust chamber assembly or the main injector plus main combustion chamber plus the nozzle.  Within the realm of compressible flow this is known as a convergent-divergent nozzle, or as a “de Laval nozzle” after a late 19th-century Swedish engineer, Gustaf de Laval, who pioneered using such shapes as part of steam engines […and you woke up this morning not realizing that you’d learn something historical today!].  How it works is simple.  Fluid flows from high pressure at the head end on the left towards the low pressure at the exhaust on the right.  In between, the flow area of the “pipe” in which the fluid flows is manipulated to accelerate the fluid.  The most narrow point in the flow is called the throat.  Fluid flow to the left, upstream, of the throat is subsonic, i.e., traveling at less than the speed of sound.  If the ratio of “high” to “low” pressure at the two ends is large enough, then fluid flow to the right, downstream, of the throat is supersonic, i.e., traveling at greater than the speed of sound.  Under such conditions, the velocity at the throat itself is exactly that of the speed of sound.  In other words, the fluid is traveling at “Mach 1” at the throat [the term named for Ernst Mach, an Austrian scientist and philosopher also from the late 19th century].  Oh, and all of this only works if your “fluid” is compressible, or in other words a gas like air or, in a rocket, combustion products.

How and why this happens gets a little heavy on the thermodynamics, so please just trust me for now.  But the really neato thing that Mr. De Laval learned when playing with convergent-divergent nozzles like this is that: (1) for subsonic flow, as the flow area gets smaller, the flow velocity goes up, (2) for supersonic flow, as the flow area gets larger, the flow velocity goes up.  In other words, they act the opposite of each other.  For a rocket, this is absolutely fantastic since the whole idea of a rocket is to fling stuff out the back end at very, very high velocity and this cool device accomplishes that with just a little bit of creative geometry.

Okay, with me so far?

Then, here’s another thing to think about regarding supersonic flow: You can’t shout upstream.  Sound is nothing more than pressure waves traveling through a fluid.  A gas has a characteristic speed at which pressure waves are conveyed within it.  That, then, is the speed of sound.  So, if the gas is traveling at greater than the speed of sound, then pressure waves cannot travel upstream.  Think of it this way: imagine yourself to be a gas molecule.  Normally, when traveling less than the speed of sound, you can receive signals from all directions.  Your motion can be impacted by pressure waves both upstream and downstream of where you sit at any given time.  However, now imagine that you are that gas molecule hurtling along in a supersonic flow.  Now, because you’re traveling faster than the ability of pressure waves to get back upstream, you can have no idea what’s going on downstream.  You’re flying along blindly.

Thus, the bottom line is that once the ratio of high and low pressures are sufficient to cause this situation of supersonic flow in the divergent portion of the nozzle (a term that we use is that the throat is “choked”), then the nozzle flow is the nozzle flow.  In other words, it is largely independent of what happens beyond the exit plane.  Largely, but not entirely.  I’ll explain below.  Hold on.

Next, we’re going to talk about the Bernoulli Equation [developed by an 18th-century father and son team of Swiss professors Johann and Daniel Bernoulli].  No, we’re not going to do any math.  All that we have to do is understand the concept of the Bernoulli Equation and how it relates to the flow in the divergent portion of our nozzle.  Here it is:  Absent other factors, when fluid is accelerated, its pressure drops.  You can think of this in terms of energy.  Pressure is like stored energy, as in electrical energy in a battery.  Velocity is active energy, as in electrical energy spinning a fan.  Absent any other input or output, when you show more active energy (velocity), you then have less stored energy (pressure).

Just for fun, here are some pictures of the men I’ve mentioned so far.  Oh, and I tossed in a friend of Daniel Bernoulli’s named Leonhard Euler.  Anyone who knows anything about mathematics or fluid dynamics knows all about Mr. Euler.  He was truly a genius on par with Sir Issac Newton.  (BTW, I kinda like the white, powdered wig thing the Bernoulli guys had going there.  Maybe I’ll adopt it myself…)

Back to the topic at hand.  Where do we stand once we combine compressible fluid flow through the divergent portion of a de Laval nozzle, traveling at speed greater than Mach 1 (meaning that pressure waves cannot travel upstream), and with the application of the Bernoulli Equation and the effect on pressure?  I will attempt to show you in a picture… 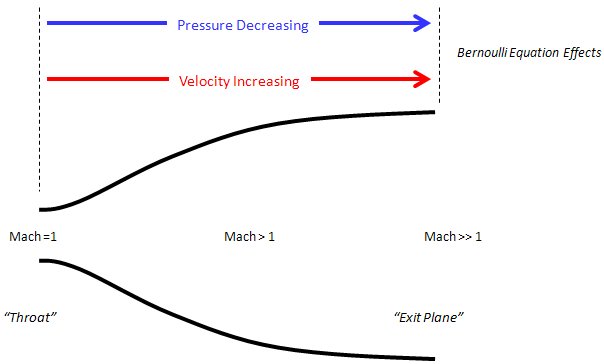 The first limit is weight.  As your nozzle gets bigger and bigger, your nozzle structure gets heavier and heavier.  As some point, any gain in engine performance is offset by the loss of vehicle performance because your engine is too heavy to lift.

The second limit is due to what’s on the other side of the exit plane.  What’s outside the nozzle is, well, the ambient environment.  If you’re sitting at the NASA Kennedy Space Center in Florida, where we usually launch our rockets, the ambient conditions are known as “sea level” conditions, meaning that the atmospheric pressure averages about 14.7 pounds per square inch.  On the other hand, if you’re floating around in space and in orbit around the earth, then your ambient conditions are, to a pretty good approximation, a vacuum, meaning 0.0 pounds per square inch pressure.

What happens if you’re that gas molecule hurtling along in the flow at supersonic velocity down the nozzle and then you’re suddenly flung into ambient conditions?  Well, if you’re in the main part of the flow, not much.  You eventually slow down through a series of oblique shocks external to the nozzle.  As I said above, if you’re moving supersonically within the nozzle, then you’re not affected by what’s downstream.  But what if you’re not in the main flow but instead along the wall?  Here’s a secret: The flow along the wall is slower than the main, core flow.  Indeed, exactly at the wall, in the limit, the velocity is zero.  That changes things.

So, exactly at the wall, the velocity is zero, and just fractions of an inch into the flow the velocity is supersonic.  This transition zone is known as the “boundary layer” and the fluid dynamics complexity here can be nearly mind boggling and it has to do with viscous friction between the fluid and the wall.  But the important point is that there is a thin layer that is not supersonic.  Below is a typical textbook-like representation of boundary layer flow. 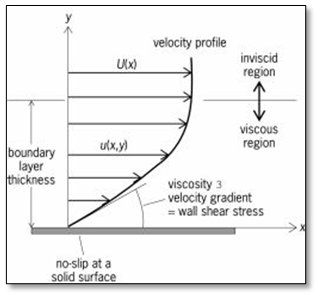 Remember when I said that what happens beyond the exit plane largely doesn’t affect the fluid flow in the nozzle?  The boundary layer is the exception.  Because the flow here is subsonic, pressure conditions downstream can influence things upstream.  And here is the source of the other limit on your nozzle size.

If the ambient pressure is much, much higher than the pressure of the nozzle flow, then this pressure can slow up the subsonic portion along the wall.  If you slow it up enough, you can make the boundary layer thicker and thicker until it’s no longer just fractions of an inch thick.  Having a thick boundary layer means that your nozzle is not flowing “full.”  The flow can become “detached” from the wall and such a situation is inherently unstable.  All around the nozzle, in local pockets, the boundary can grow and collapse and grow again causing localized pressure variations.  Shock waves start bouncing around.  Then the nozzle structure itself, usually not built very stiff so that it doesn’t weigh too much, starts to respond to these local pressure variations and shock waves and it wobbles and ripples and buckles.  To put is more succinctly, if your nozzle expands the rocket exhaust flow too much for the ambient conditions, you have an “over-expanded” condition and this can literally tear the nozzle apart.  Below is a picture that tells the story of the impact of ambient pressure on nozzle flow. 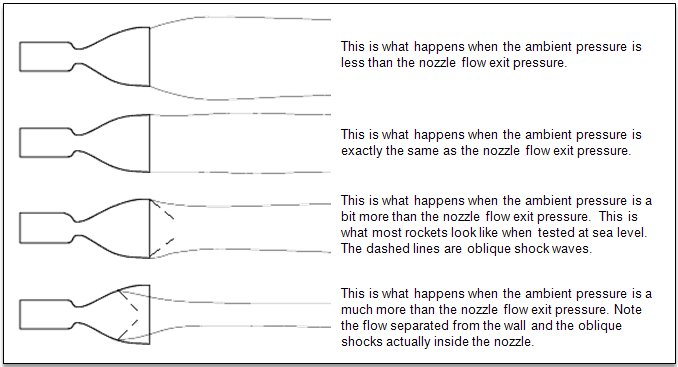 For all of the tests conducted to date, the nozzle that we’ve tested on E10001 has had an expansion ratio of 35 to 1, meaning that the area of the exit plane is thirty-five time larger than the area of the throat.  With this kind of expansion ratio for this engine, the nozzle flow is not over expanded.  The nozzle “flows full” at sea level conditions like those seen at the NASA Stennis Space Center (SSC) where we test the engines and all is good.  But the J-2X is intended to be an upper stage engine in flight, meaning that when it fires during the mission, it will be at over 100,000 feet in the altitude where the ambient pressure is much less than sea level conditions.  Because of that, we designed the engine to use a larger nozzle, get more performance from greater exit velocity, and not over expand the exhaust flow at THOSE conditions way up in the upper atmosphere, practically in space.

But then how do we test it?  If we have a nozzle that flows full at altitude, but does not flow full (i.e., it’s over expanded) at sea level, then how do we perform a test showing that the nozzle works?  We can’t exactly build a test stand at 100,000 feet in the sky.  Instead, we make the test stand simulate these high-altitude conditions.  Below is a picture of NASA SSC test stand A-2.  What you see there in the middle, the big tube several stories tall surrounded by structures, is the passive diffuser. 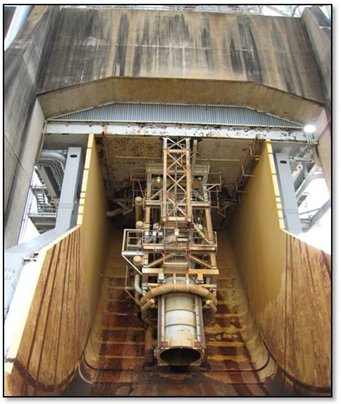 The diffuser, combined with a clam-shell enclosure structure around the bottom portion of the engine, uses Bernoulli effects (see, they come into play again!) such that when the engine is firing, it does so into an ambient environment that “appears” to be like that at high altitude.  By doing this, for the next phase of J-2X E10001 development, we will be able to do testing with a nozzle extended to an expansion ratio of 59 to 1.  That is one step closer to the ultimate flight configuration for the J-2X as part of the exploration mission and therefore one step closer to fulfilling that mission.  It takes a bit of explaining to understand why all this is necessary, but the bottom line truly is that we are getting closer and closer to our exploration goals.

So, enjoy come on along with us to celebrate the Year of the Dragon with the generation of lots of smoke and fire from the J-2X.  It’s going to be fun.  But first, maybe a few traditional Chinese New Year’s treats… 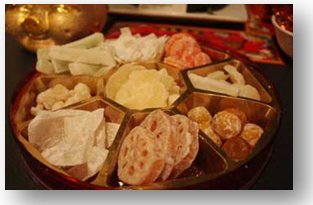