In the end, truly, it all comes to this: the hardware.  Everything that we do – and it is an astonishing amount of work – comes down to an operational piece of space launch hardware, a rocket engine (albeit a development unit first example).  It is sometimes quite easy to forget that fact after being buried in the mountains of necessary details for several years.  Yet that day has now arrived.

The Main Combustion Element (MCE), consisting of the Main Combustion Chamber (MCC) and the Main Injector (MI) mated together, arrived at NASA on 22 February 2011.  While a number of piece parts and components have been arriving at SSC for weeks, it is the arrival of this sub-assembly that marks the start of assembly.  It would not be too much of stretch to say that the rest of the engine, one way or another, hangs off the MCE.  So you need that part to get the whole process started in earnest.

The drawing below shows the first steps in stacking the whole thing together. 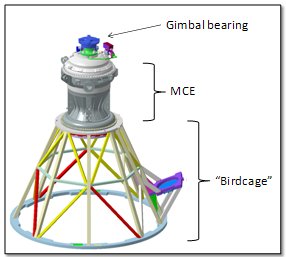 Your first question should be, “What’s a Birdcage?”  It’s actually a simulator for the nozzle.  Because this is the first build of the engine and because the various components are not completing fabrication in the optimal sequence, we have found ways to expedite engine assembly such as the use of this nozzle simulator.  The whole engine will be stacked and assembled with the Birdcage acting as the effective pedestal for the process.  Then, when the nozzle does arrive, the assembled upper part of the engine will be lifted, the Birdcage will be removed, and then the assembled pieces will be lowered onto the actual nozzle assembly to be used for Engine 10001.  Below is a photograph of the actual Birdcage sitting in its packing box at NASA SSC. 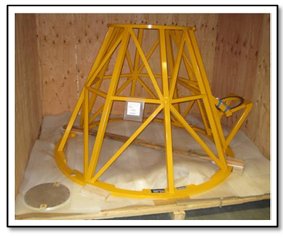 (Now, I’m not going to burst anyone’s bubble, but whoever first started calling this thing a “Birdcage” perhaps has a frightening impression of how large are the birds of southern Mississippi.  Those are some awfully large holes.)  Later, the Birdcage will be reused as the structural foundation for the assembly of the J-2X PowerPack Assembly to be tested next year.

The next picture is of the assembly area where the whole thing will be brought together.  There is a raised floor on which the technicians will stand and there is a recessed area where the dolly will fit on which the engine is assembled.  On the silvery metal carts shown – the so-called “bread carts” – the kits will be laid out for the next stage of assembly as the engine comes together. 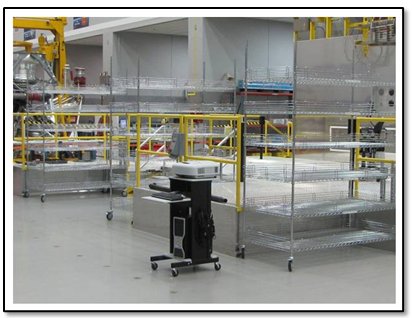 One interesting little note about that picture of the assembly area is that in the upper left-hand corner you can see another engine within a big yellow piece of ground support equipment.  That is an RS-68 engine that flies on the Delta IV vehicle.  The J-2X assembly area sits right next to the RS-68 assembly area though they are distinctly separated.

Here are some other really cool pics:

Okay, so maybe “really cool” is a slight exaggeration.  On the left is a corner of the kit staging area where, on a pallet in the back (can you see it?), sits the first pre-arranged kit of engine parts to arrive at NASA SSC.  On the right are the two turbopumps for Engine 10001 still sitting in their shipping crates.  Trust me, as the assembly process moves forward, the pictures will get better.  Really.

So, J-2X is coming together.  Over the next several weeks, I will be posting pictures and descriptions of the process.  I do have to say, from a personal perspective, seeing this thing finally becoming a reality is quite gratifying.  Thank you all for coming along and sharing the ride.