Everyone seems to like analogies between the composition of a rocket engine and that of the human body.  These are often colorful but not always helpful.  In some cases, however, they work pretty well.

Okay, so let’s start with your body as it is.  Now, imagine removing all of your bones.  Guess what?  You’re an immobile lump.  Even if your brain is sending signals and your muscles are contracting, you’re not really moving anywhere.

This time, let’s instead start with your body as it is, but now imagine removing all of the muscles and tendons that connect the muscles to the bone.  You’ve got a central nervous system and you’ve got bones, but with nothing to flex, the chain is broken and you’re stuck where you sit (assuming that you can still actually sit).

And, of course, if you instead start with your whole self and imagine removing your brain and/or your central nervous system that connects your brain to your muscles, again, you’ve achieved perfect immobility (i.e., you look like me on Saturday afternoons during college football season). 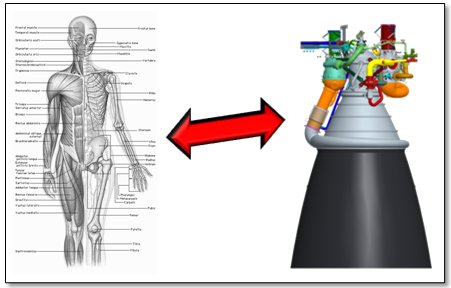 The point is that in order for you to be up and about, shoveling snow, doing laundry, playing pool, typing, whatever, you need both the command center that figures out what signals to send — your brain — and you need things that turn those signals into action — your muscles and tendons and bones.  In a rocket engine, the analogue for the brain is the engine controller.  It is a computer that receives instructions from the vehicle and sends out commands to the engine pieces so as to fulfill those instructions.  The analogue for the muscles are the valve actuation systems.  These are the things that “flex” and cause movement.  And the analogue for the bones, the final effectors that make things happen, are the valves.

The controller sends out signals and then the actuation system responds by shuttling pressurized working fluid — helium for J-2X though some engines use hydraulic fluid instead — where it needs to go so that the valves move and the engine comes to life.  The engine goes from being a lump of inert, shiny metal to a “living” beast of flowing propellants, spinning turbomachinery, lots of fire, and thundering, rumbling thrust.

On the J-2X, there are 42 valves.  Most of this number is made up of small valves like check valves, solenoid valves, and valves in small lines like the bleed lines.  There are also a handful of big valves — the primary valves — that directly control the flow of propellant and, in one case, combustion products along the plumbing of the engine.  Each of these primary valves is connected to a valve actuator, i.e., the muscle.  These valve actuators convert the energy of high pressure helium gas into mechanical rotation of the valve.  This is accomplished by pressurizing cavities and moving pistons and, in this way, the valve is pushed opened or closed.  I’ve used this schematic shown below before, but it is useful here as well since it illustrates the primary J-2X valves: Main Fuel Valve (MFV), Main Oxidizer Valve (MOV), Gas Generator Fuel Valve (GGFV), Gas Generator Oxidizer Valve (GGOV), and the Oxidizer Turbine Bypass Valve (OTBV). 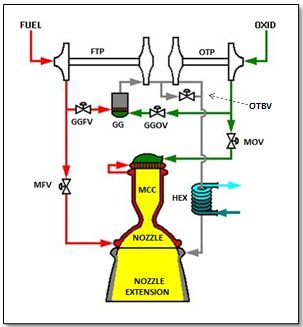 The control logic for J-2X is relatively simple.  The whole subject of different kinds of control logic is a good topic for a future article, but suffice it to say that for normal operation the J-2X: starts on command, can change between two power levels on command, and shuts down on command.  The control system is designed to do other things as well, including monitoring the health of the engine, but these operations are the commanded functions.  Start and shutdown can be simplistically thought of as: the valves open and the valves close.  It’s a bit more complicated since the timing of opening and closing is extremely important, but the open/close notion is basically true.  The oddball action is the one consisting of changing power levels.  That is accomplished by controlling the power to the oxidizer turbine via the OTBV.  This bypass valve effectively allows for limited, independent control of the two turbopumps.  By altering the power to the oxidizer turbopump (OTP), you can control the engine thrust level (and, simultaneously, mixture ratio).

The OTBV for J-2X is designed and built by Pratt & Whitney Rocketdyne (PWR), the prime contractor for the whole engine.  In addition to being responsible for the “oddball action” on the engine of changing power levels, it represents a challenging design due to the range of operating conditions.  Unlike the other primary valves on the engine that see, essentially, one narrow range of environmental conditions, the OTBV has to function in temperatures approaching 420 degrees below zero Fahrenheit (liquid hydrogen conditions) immediately prior to start and then, suddenly, within 1 second of ignition of the gas generator, see temperatures approaching 750 degrees above zero Fahrenheit (combustion products).  That broad range of operating conditions requires special design considerations and special materials.  Not only do you have to worry about wear and tear under such harsh conditions, but you also have to think about simple operation under the extremes of thermal expansion.

The original, Apollo-era J-2 engine also had an OTBV, but it was used slightly differently and was designed much differently.  It was a butterfly valve whereas the J-2X OTBV is a ball valve. 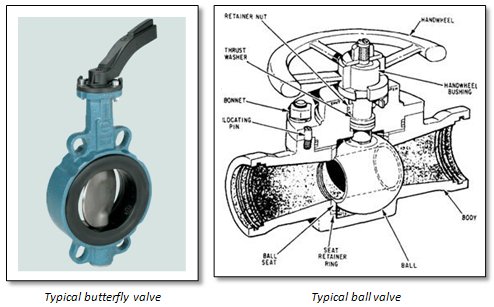 No, the valves shown in the picture are NOT rocket engine valves.  I can’t show any internal workings of rocket engine valves.  In fact, I am not even allowed to describe the general design details that make the J-2X OTBV kind of unique.  However, the basic elements of rocket engine valve functionality for butterfly and ball valves are essentially the same as these water valves.  The biggest difference is the replacement of the handles with pneumatically driven actuators.  Back during the Apollo era it would seem that butterfly valves were most frequently used, but after many years of usage on the Space Shuttle Main Engine, ball valves are often preferred these days.  They generally require less torque to move and they generate better flow characteristics and flow rate control capability.

The first OTBV unit for use on the upcoming development engine testing for J-2X is in the later phases of manufacturing at the PWR in Los Angeles.  All of the individual piece parts are schedule to be complete by the beginning of February and assembly will begin the middle of February.  The valve then will be integrated the actuator and shipped to the NASA Stennis Space Center to be put on the first engine.