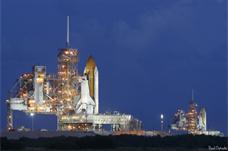 As we prepare for the next Shuttle mission I am reminded of the great photo that captured two Shuttle vehicles at their respective launch pads. It is easy to look at that picture and admire the incredible capability and accomplishments of our Human Space program. At the same time I can’t help but wonder about the parable of the tortoise and the hare. If you recall the tortoise repeated over and over again, “Slow and steady wins the race.”

During the month when this Shuttle photo was taken, Zhai Zhigang, the Shenzhou VII mission’s commander, was the first taikonaut to take a walk in space. China’s third human mission launched on Thursday, September 25th demonstrates China’s steady efforts to establish a permanent Chinese Human presence in Space. Also in “mid-September, Moscow and Havana negotiated joint space projects. Anatoly Perminov, director of the Federal Space Agency (Roscosmos), said the sides had discussed the possibility of setting up a Cuban space center with Russian assistance.” The interesting part of this editorial was the reference to Arnaldo Tamayo Mendez. I know who is Mr. Mendez? During the time that we were not flying and preparing for the first shuttle mission, Mr. Mendez was the first Cuban to go into space on September 18, 1980. Now 28 years later, we will probably have two additional space agencies within our western hemisphere. Two? Oh, did I forget to mention how our own astronaut, Jose Hernandez is working on a proposal with Mexico to establish Agencia Espacial Mexicana (Mexican Space Agency).

Yes, many will not see some of these efforts as ever gaining the momentum to challenge our leadership in space. This may be true, but what should be our strategy forward? There are new alliances and relationships being established in the international community that do not include NASA. Should we leverage these relationships or create new ones? If we were to strengthen our ties with India or initiate a new partnership with the Mexican Space Agency, what would it look like? Let me know what you think.

Last year NASA issued a Request for Information, or RFI, for Commercial Lunar Communications & Navigation. The intent was “to gauge interest and solicit ideas from private companies in providing communications and navigation services that would support the development of exploration, scientific and commercial capabilities on the moon over the next 25 years.” It is a potential next phase of the agency’s emphasis to encourage commercial space as it is doing with the COTS (Commercial Orbital Transportation System) program in the Commercial Crew & Cargo program office.

As I reflected on potentially using a commercial satellite provider to enable the astronauts to “phone home” from the moon, I was curious as to what else has been going on in the world of space commerce. In the process I stumbled across this blog entry by Dr. Peter Diamandis, SUCCESS!!! Using Economic Engines to open the space frontier. In it he reflects on how the public flight of the Rocket Racing League “X-Racer” and the rollout of White Knight 2 were so critical. What caught my attention was his reflection on the X-Racer and how it “is tapping into the multi-billion dollar entertainment marketplace” and it is “a company which is exciting the public about space and driving the development of low-cost and reliable engines.” Of course he states his personal reasons for his enthusiasm about the X-Racer but it made me wonder what else could NASA do to encourage, foster, sponsor space commerce. What role should NASA play in enabling space commerce? For me, the benefit for NASA would be greater infrastructure that NASA could leverage as it explores beyond LEO.

If you haven’t had a chance to place your votes with the recent set of twitter polls focused on NASA’s future focus (NASA poll, Outside of NASA poll) I would encourage you to submit your vote.  You will find an interesting trend on the external poll.  It points to NASA having a greater focus on helping to develop commercial space.  The missing data is what should we do to fulfill this focus?

Let me know what you think our role should be as it relates to commercial space and what other efforts could be taken to spur on space commerce?