I must admit that last week I got that pleased, grateful feeling like the one I get from being “carded” at the grocery store checkout line when I purchase a bottle of wine. It has been a while since I was the age of a Gen Y’er, but I took it as a great complement to be mistaken for one last week. For those that do not know me, I am a “Baby Boomer” with 20 years of experience at JSC and most of my blog entries have been from a “boomer” perspective. Granted, those that know me best would not categorize me as having the typical “Baby Boomer” perspective, but is there really a perspective that captures an entire Generation? No, but I do think there is a difference between the image we have of NASA before we arrive and the image after we have been supporting this great organization. So, let me share how the image changed for me and why it is good to revisit our original vision. To that end, join me in visualizing those two images. 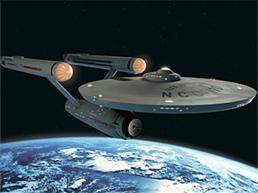 For many in my generation it was the Apollo program or Star Trek that sealed our future with NASA. For me it was the original voyages of the Starship Enterprise.  Yes, I am one of those that would love to see the mission of the agency to be, “To Boldly Go where No one has gone before.” My expectation was that upon entering the gates of NASA, I would find someone working on the Warp drive or a transporter. I thought that there would be people working on projects that pushed the boundaries of space and time. I expected Mission Control to look like the deck of the Enterprise. Instead, I found the Apollo Mission Control configuration that worked exceedingly well into the late 1980’s. Now don’t get me wrong; I believe that we are executing some very exciting missions and have some incredible technology projects occurring in various organizations around the Agency. My point is that my vision of where NASA was heading was different from the reality. I also found that many of my colleagues shared the same opinion.

Over the past 20 years that vision has been challenged by the realities of what is currently possible in the realm of human spaceflight. My original naiveté was reframed by the wisdom gained over the years and yet, there is much to be gained from recapturing the original vision we had when we first drove through the front gate. About 10 years ago I tried to recapture my initial feeling when I first arrived at JSC. It’s a long, but great story that can be found in the archived article from the NASA ASK magazine. The end result was that I was able to create a lab focused on looking at the leading and even bleeding edge of technology development. I found exciting research occurring inside and outside the agency that reminded me of the Star Trek technologies. There was the quantum pair possibility of either instant communication over large distances or teleportation and the potential holodeck application of the 3D visualization research at the University of Central Florida. In recapturing my original vision I found labs around the Agency that were collaborating and searching for new, creative ideas around the world.

Now in 2008 I find myself wondering, what was that original vision of NASA for many of my Generation and the following Generations? What are the reasons why that original vision was not achieved? I carry a Motorola Razr in my pocket to communicate, so why can’t NASA push the boundaries of space and time? Earlier this year the Advanced Planning office asked a team of Generation Y leaders where they wanted JSC to be when they became Center Director or Program Managers.  We were asked by many, “Why did you ask Gen Y?” Partly, because they remember the feeling and vision they first had when they arrived at NASA. So think back and recall your original expectations when you arrived at NASA and hold it up to the view gained from wisdom over the years. Then see what unfolds. Yes, I am looking for my fellow Baby Boomers and Gen X’ers to offer their view of the future! Does your original expectation match the reality of where you are at now, FANTASTIC! Please, let me know. If it doesn’t, in what ways does it not match?

I’m looking forward to your feedback.