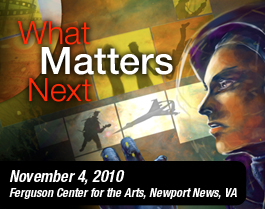 This week is the second TEDxNASA conference at the NASA/Langley Research Center (LaRC).  They have been leading the agency in creating these outstanding and innovative conferences to bring together various perspectives.  I would definitely encourage anyone that is familiar with TED events to take a look at the videos from last year’s TedxNASA Space to Create. You will definitely enjoy the talks.  Additionally on November 20th, NASA/LaRC and NASA/Johnson Space Center will be hosting events in support of TEDxYouthDay.  Held on Universal Children’s Day – “TEDx organizers across the globe will host events for (and by) young people. These events will vary widely in size, format and theme, but they will share a common vision: inspiring curiosity, igniting new ideas, empowering young leaders.”

So as I thought about bringing together the worlds of technology, entertainment and design I am reminded of an experiment that we are trying at JSC.  Two months ago we asked Pat Rawlings to help bring together the world of technology and entertainment in looking at a possible future for the Johnson Space Center.   He combined his insights on technology trends with a graphic novel format to describe what the future might look like at the 100th anniversary of the lunar landing. In his depiction of the future he introduces the Butterfly Effect Environmental Software (B.E.E.S) that used massive amounts of data to better predict the weather and other events.  If you are curious about what this might look like I would recommend that you look at the external posting of the JSC 2069 story.

When I reflected on the TED activities, what struck me more than our story about the possibilities was the reality that was recently announced by NOAA (National Oceanic and Atmospheric Administration).  They introduced a new facility with a “state-of-the-art supercomputer to give NOAA a powerful new tool in climate and weather modeling”.  It is reminiscent of Jules Verne and submarines or da Vinci and airplanes.   When you combine technology and the arts (left and right sides of the brain) new realities are possible.  Of course the JSC 2069 story did not result in NOAA’s announcement, but like Jules Verne it opens up the possibilities for future applications of a nascent technology/capability.

Therefore, I applaud the team at Langley for pushing to bring together the different world views from technology, entertainment and design.  I can’t wait to see the possibilities that will emerge from the discussions.

I am at the Bayou Regional FIRST robotics competition and am amazed at the NBA atmosphere of the event.  Filled with everything from the bleacher stomping “We will Rock you” to the sound system that gives you a second heart beat and team mascots cheering on the adrenaline filled crowds.  A bunch of wanna be engineers along with scores of families and friends that are excited by the 6 robots battling out to score the most points by kicking a soccer ball into a goal.  Today these future engineers and scientists are the rock stars of the Alario Center in New Orleans.  My hats off to the Stennis Space Center for their support of an outstanding event and inspiring our next generation.

There is much talk about the lack of a destination and how we need one to inspire our future generations but I think there is much to be said about making science, technology, engineering and math fun. Watching this crowd I think more will be inspired by their achievement in making a robot that will go to the national competition than a Mars mission by the end of this decade.  Yes there is a place for a destination but that is not the only way we can inspire.  We should not underestimate the power of mixing education with entertainment to attract our future workforce.  I know some will say that I’ve gone to the “dark side” but then again how many of us were attracted to the world of engineering because of the creations of Lucas and Roddenberry?

Edutainment cannot only inspire but it can also educate the world about the scientific and technical advancements we are making. Even though many are inspired by the amazing images from our technical achievements like the images from Hubble, engineers are not the best ones to share our discoveries and educate the public of our discoveries.  Just ask my family.  My thespian daughter can weave a tale that will keep us engaged throughout dinner while my tales may last through desert.  I like what Will Pomerantz , Manager of Google Lunar X-Prize, recently shared in his blog about the power of mixing the entertainment industry with our engineering discoveries, “Scientists and Engineers have fundamentally important and exciting things to tell the world about–but are ill suited to do the telling. By working together with entertainers, they hope to play to each group’s strengths, with the end result of conveying the key messages to an audience in an understandable way. To that end, the National Academy of Sciences is organizing events like last night’s salon, and even offering free scientific consultation to film makers and other entertainers who want to improve the scientific accuracy of their products.”

I believe it will take artists, entertainers, writers and the left brain people of the world to create the stories that will inspire and educate our nation.  It is images like the one at the right, from an artist that I continually get my inspiration from, Pat Rawlings, that will inspire a future entrepreneur to create the first Ivy league campus on the moon or for us Texans, a Texas A&M satellite campus near Tranquility base.  What engineer wouldn’t want to be part of this cathedral building project?

What if we not only used robotics but video games as well? What are the other possibilities to inspire if we mixed NASA’s discoveries with the world of entertainment?