Sorry it’s been so long since you’ve heard from me! It has been plenty busy up here since the next crew’s arrival has been delayed. We’re staying on top of things, but it doesn’t leave enough time for me to collect my thoughts and jot them down at the end of long days and short nights.

I’ve had the chance to talk to our former crew crewmate, Ron Garan. He’s doing great and loving life with his feet back on his favorite planet. On Sunday we will have a video conference with our future crewmate, Dan Burbank. Dan’s in Star City right now. We were all watching with great interest as the next Russian Progress vehicle successfully launched from Baikonur Cosmodrome earlier this Sunday morning. It uses the same Soyuz rocket which launches us into space and this flight is a critical step in clearing Dan’s crew for launch in a couple of weeks.

You can do the math from here. They launch in a couple of weeks and we only overlap by a few days. Add in some orbital rendezvous days and I have only a little over 3 weeks before returning home on Nov 22. With a little luck, I’ll be home for the first Thanksgiving in 3 years. It’s hard to believe the time has flown by so quickly!

I have so many stories to tell and photos to share!

Most will have to wait, but here are 2 pictures I just have to share right now.

The first was our view out of the cupola about a month ago. I took this picture as part of a time sequence of photos and have heard it’s been turned into a video clip. Can’t wait to see it! When you’re flying through the aurora, it seems like you should be able to hear or feel something. The closest vehicle shown here hanging from the bottom of the space station is our Soyuz spacecraft. That will be our ride home in a few weeks. The other ship a little further away is a Progress cargo ship. They are very similar which explains why they use almost exactly the same rockets to get to space. 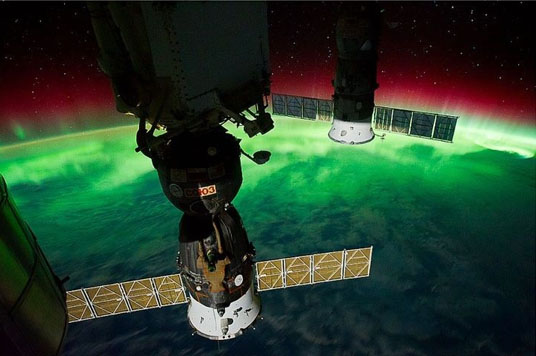 When the mission is complete for a Progress cargo ship, we pack it full of trash and send it home. That’s actually a figure of speech because the Progress ship doesn’t make it all the way “home” – they are designed to burn up as they reenter the atmosphere.

I managed to capture a sequence of photos of this vehicle on Saturday as it was shredding atoms of the upper atmosphere into a white-hot plasma trail and the friction was beginning to tear the ship itself apart. To get down, the ship uses small rockets to slow down just enough to change its orbit so that it encounters thin air at the top of our atmosphere. The vehicle moving through that thin air at high speeds generates friction (or drag) which slows it down much more. If it’s in darkness, the results can be spectacular! At the time I took this picture, the Progress ship was below and ahead of us, so I’m looking basically down. The sky (below) is just starting to get illuminated by the rising sun. A few seconds before this shot, the sky background was black, but the plasma/debris trail wasn’t as pronounced. A few seconds after this and the rising sun washed everything out. 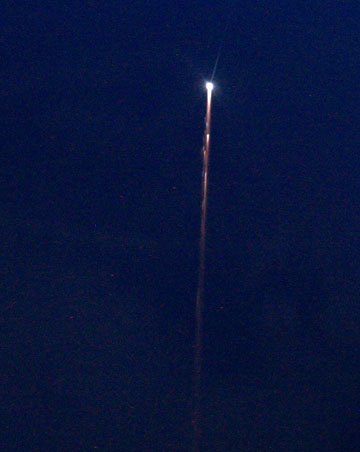 It was really cool to watch this with our eyes because photos don’t capture everything. The glow was steady at first, but as the ship started to break up, there were big changes in the intensity and you could see smaller things fall behind. Our ride home in the Soyuz has the same kind of meteoric glow, but our heat shield protects us from most of the heating.

That’s about it for tonight. We have some long weeks ahead, but I’ll be enjoying every minute of it!!

3 thoughts on “Progress in Space, and I'll be Home for the Holidays”