Thanks for sharing this adventure with me! I can’t thank you enough for your prayers and encouragement.

I have a few random thoughts to share before we climb aboard our Soyuz spacecraft and head for home on Planet Earth.

Our window to the world.

You’ve seen the pictures and heard me talk about the cupola, but probably have a hard time imagining this place. Here’s a picture of my window to the world. I’m going to miss its unrivaled view of God’s Creation. 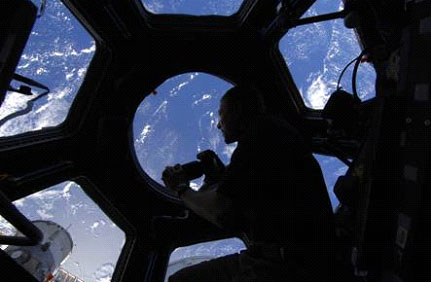 Every time I slide down into the cupola, I say a special thanks to the memory of deceased astronaut, Charles “Lacy” Veach, whose vision, passion and persistence led to this stunning asset being rescued from the budget cut scrap heap in the early 1990s. Lacy knew instinctively the importance of having windows to support onboard robotic operations. Although he knew he was losing another personal battle with his health at the time, he fought ferociously to convince the program the cupola would be worth the investment. 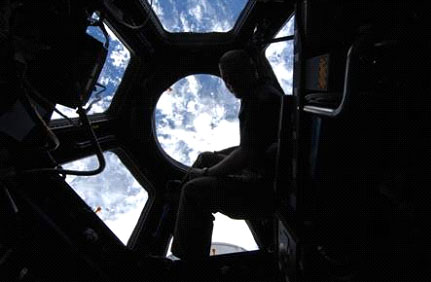 Today’s astronauts who use the space station’s big robotic arm to grab hovering cargo ships just outside these windows are thankful for the unambiguous view. And the rest of us who barely touch the arm get a lot of benefit, too.

Special symbols for our mission emblem.

During the Change of Command ceremony, I spoke about our mission patch and the image of the ISS following the spirit of exploration as exemplified by one of the great explorers, Captain James Cook and his ship, Endeavour. 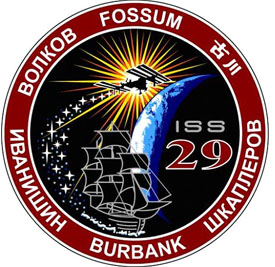 Take a close look at the ship’s wake as it transitions from foam into a stardust trail. Individual stars in that trail represent our personal family legacy – there is a star on the patch for the children of each crewmember.  If you look closely, one small star has a little extra “twinkle.” This is for the only grandchild in the bunch, my granddaughter, Rebecca. She was born a few weeks before I left Houston for final launch preparations. The best part of going home is to be with my family again. I can’t wait to see my wife, kids, and extended family, but have to confess I am most excited about getting to get to know this precious little girl. “Twink” has no idea what her crazy Grandpa Mike has been up to since she was born. She’s too young now, but she’ll be hearing lots of stories about my adventures on this amazing orbital outpost in the years ahead.

The philosophy of Jeremiah Johnson.

A couple of months ago, we had our first “Movie Night” on the ISS and we watched my all-time favorite movie, Jeremiah Johnson. In the movie, Jeremiah (Robert Redford) heads west to become a Mountain Man in the Rocky Mountains. He is taught much by an older, cantankerous mountain man (Will Greer) who goes by “Bear Claw.” After many missteps and hardships, Jeremiah learns to love the rugged beauty of the Rockies. At the end of the movie, Bear Claw encounters Jeremiah crouched in a cold, snowy campsite cooking rabbit on a spit. The following is a part of their short exchange.

Bear Claw, “Were it worth the trouble?”

We have traveled far in this journey which began almost exactly 3 years ago when we were assigned to this mission. The training flow is 2.5 years in length and about 40% of it takes place in Russia, Germany, Japan, and Canada. In comparison to the 11 months of training for a space shuttle mission, which is almost all in Houston, this was hard to imagine. I thought it would be dreadful. I was wrong. Working and training with these amazing ISS and Soyuz teams in various corners of our globe was one of the great parts of this mission.

Similarly, it was hard to comprehend what it would be like to live and work in space for almost half a year, but the time has gone by in a flash.

I had my doubts about this entire adventure when I accepted the assignment. Just as it is with climbing mountains, the big things in life always look impossible when you look only at the top. The key is to success is to set your bearing, find the next foothold and keep moving forward. Now that I’ve reached the top, done my job and enjoyed the view, it’s time to come down. “Were it worth the trouble?” I think you know my answer to that one.

In a few hours, we will say our goodbyes, climb into our Soyuz spacecraft, and depart the space station. Our next stop will be Planet Earth where I plan to breathe deeply of the fresh air, drink big mugs of black coffee, eat food which doesn’t come from a pouch, enjoy the embrace of my family and give a huge grandpa hug to a precious little girl I want to get to know.

There will be time later to see what new dreams and adventures might wait around the next corner.

Once you have flown, you will walk the earth with your eyes turned skyward, for there you have been, there you long to return.