My Head is Virtually in the Clouds

Long, long ago, before I became a CIO, I used to be a happy carefree Virtual Machine systems programmer.  But, today, I think about hyper supervisors instead of hypervisors; about the Goddard Unified Enterprise Services and Technology (GUEST) procurement instead of Guest Operating Systems; about losing virtually every bit of my memory instead of losing my bits in virtual memory; about program managers who thrash instead of computer programs that thrash.

So, years later,  after Federal Data Center Managers struggled with the challenges of consolidating Data Centers, I find myself ?Back to the Future? wrestling (using Judo actually) with Data Center consolidation strategies.  But relative to technologies like cloud computing, virtualization, and Web 2.0, what does this really mean if the entire world, or universe (remember, I?m a NASA CIO), is your ?

Cloud computing is a general concept that incorporates software as a service (SaaS), Web 2.0 and other recent, well-known technology trends, in which the common theme is reliance on the Internet for satisfying the computing needs of the users.

Gartner, in Cloud Computing: Defining and Describing an Emerging Phenomenon (Daryl C. Plummer, et. al.), calls the trend of IT during the last 15 years,  a discontinuity due in part to the ?commoditization and standardization of technologies, virtualization, ?  the rise of service-oriented software architectures, and, most importantly, the dramatic growth in popularity/use of the Internet and the Web.? 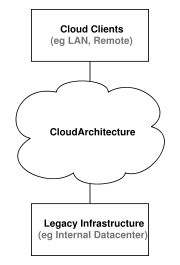 I?m not sure it?s a discontinuity.  It has a feel to this CIO like a point of inflection in some kind of continuous evolution ? whether or not it?s periodic or not.  One good thing about metaphoric points of inflection is that we know something is about to happen, good or bad.

In this risk averse profession, it?s easy to retreat to a ?default deny? mode.  But, maybe we should think about the paradigm-changing point of inflection we?re on.  The site http://www.cloudsecurity.org has some interesting discussions about security and cloud computing.  Not just the traditional ?keep a CIO up at night? stuff, but some potential security benefits that this technology may have.  What are the possibilities? In this technology , the nature of our customers will be to ?find a way? to get to these capabilities ? whether or not CIOs are ready or not.

Maybe it?s time for CIOs to be superheroes.  Maybe it?s time that CIO?s use their power for good.  Maybe we need to learn from our past and change our whole concept of service delivery and security in light of this new future.

?I never look back, darling. It distracts from the now.? [ Edna in The Incredibles]

Oh, the good old days ? when I was a superhero systems programmer.  I can?t look back again.  But, it?s sure incredible up here in the clouds.  Now where did I put that cape?

One thought on “My Head is Virtually in the Clouds”