I love the smell of September in Washington, DC, it smells like the future.  It always reminds me of the joyful expectation of going back to school; the anticipation of learning new things; and it’s the ever-so-slight sense of urgency caused by the recently-noticed shortening of days.    It’s the scent of cool crisp mornings with a hint of humidity in the air; and it’s the aroma of the blossoms of the crepe myrtle as they accelerate their descent to the ground.

I was in a brainstorming meeting last week with a group discussing goals of a Maryland Science, Exploration and Education Center (SEEC) at Goddard Space Flight Center.  The objectives of the SEEC include inspiring, engaging and educating the next generation of scientists, engineers and technologists; providing compelling experiences to all to increase understanding of 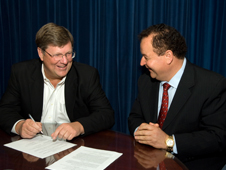 our home planet and our place in the Universe; and to create a destination of choice that effectively showcases NASA and Goddard’s current work.  To help the group see the possibilities and get our creative juices flowing, someone put up a quote from Edwin Powell Hubble:

“Equipped with his five senses, man explores the universe around him and calls the adventure Science.”

I sat aside for a moment the fact that as I enter the second half century of my life, these five senses are becoming increasingly insufficient for exploring this adventure called life. After that, I realized that this was a pretty cool quote for many reasons.  I did a little inventory of the five senses and then came to smell.  It wasn’t surprising that this whole notion of establishing SEEC smelled like September.

Some folks are examining the phenomena of synethesia and clairalience where one could acquire other sensory knowledge or psychic knowledge through smell.  This notion of the smell of success might not be too goofy.  Consider a quote from the movie Apocalypse Now that says,

“I love the smell of napalm in the morning. Smell(s) like victory.”

As leaders strive to inspire and engage, we need to fully understand the power of senses like smell or even taste.  Many have heard the expression, often said of players on winning sports teams, they wanted the win so bad, they could taste it.

Senior Executives will establish new performance objectives for the year; I will have a leadership team retreat to establish my Directorate’s annual goals; and in the government, we will approach the start of a new fiscal year.   Frank Sinatra sings to us in September Song:

Oh, it’s a long, long while from May to December
But the days grow short when you reach September
When the autumn weather turns the leaves to flame
One hasn’t got time for the waiting game

Hope, inspired future, sense of urgency.  I now appreciate the synchronicity of events recently and why it smells like September.