On the way to the funeral of my grandmother, we drove by a place she used to take us as children.  She would go to the historic O Street Market in the Shaw neighborhood of Washington, DC.  While she shopped, we played at the adjacent Kennedy Playground.  We passed the time while my grandmother looked at chicken livers and chicken wings.  I had glorious memories of riding on trains, sailing on ships, and flying on planes.  I was particularly enthralled with the planes and my ability to fly.  I was stunned … I repeat … stunned, when as a young teenaged driver I rode past there only to be shocked by the fact that they were not real, functioning trains, ships, or planes.

As the funeral procession rode by, there was nothing left of the playground.  The only thing that remained of the O Street Market was a façade of what once was and fragments of memories of a little girl with a big imagination and her grandmother.  I cried.

Later that night, a lifelong childhood friend also named Linda came by my house.  She told me something I forgot – or maybe I never knew.  She said that because of me, she was convinced that she could fly.  Well, I blogged about my own misguided thoughts about my airborne abilities (pictured here in my flying tricycle), 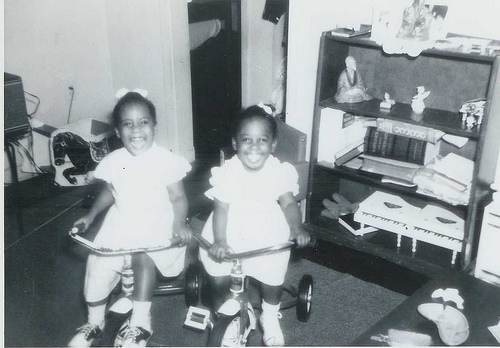 but I didn’t realize until that moment that my childhood friend, without my knowledge had latched on to this vision of flight.  She told me that she learned from my failure and concluded that I just didn’t know what I was doing.  Her flight attempt ended with a bump on the head.

I knew that there was leadership lesson here; I’d figure it out later.

Lately, I’ve taken a lot of hits about the NASA vision for IT – that we are the BEST IT organization in the world (being the best in the universe will be in our 5-year plan).  I had the audacity to suggest that we should measure this objectively by project performance, workforce competencies, outcomes of effective governance, and application of innovation.  I got constructive and loving feedback suggesting that perhaps we shouldn’t strive to be the best – we can’t really afford that anyway.  Let’s just be good enough – it’s cheaper.

But it seemed reasonable to me.  Even though NASA is not in the IT business, IT is a critical part of the products and outcomes that we produce.  We spend nearly one and a half billion dollars on IT and we need to get the most value that we can out of this investment.  We can do this by being the best in the management of IT.

The notion of a Big Hairy Audacious Goal (BHAG) is nothing new.  Jim Collins describes this in his book “Built to Last”.  He offers that successful organizations have a BHAG and it

“… engages people – it reaches out and grabs them in the gut. It is tangible, energizing, highly focused. People ‘get it’ right away; it takes little or no explanation.”

Many companies or organizations use the BHAG to stimulate progress.  Here are some examples:

But, in his book, The 21 Indispensable Qualities of a Leader, John C. Maxwell discusses the importance of vision in a leader’s walk.  In fact, a leader’s vision is drawn on their past.

“Vision isn’t some mystical quality that comes out of a vacuum, as some people seem to believe.  It grows from a leader’s past and the history of the people around him.”

I still can’t shake my childhood vision of being able to fly.

However, what if this criticism is justified?  Maybe I will cause NASA to just get a figurative “bump on the head” as my friend Linda.  I can’t say that I’m really sure of the answer.  But, as I did some research for this blog, I discovered something truly amazing.  I discovered the trains, planes, and ships WERE REAL!

In a Time Magazine article, Recreation: Way Out to Play, the writer talks about the opening of the then new John F. Kennedy Playground in June 1964.  It was a child’s vision of Eden that was part of a project to support depressed city neighborhoods that had no recreational activities.  The program cost nothing, and the planners simply asked the armed forces to donate real trains, planes, and ships.  REAL PLANES! I KNEW IT!!!

“Limitations live only in our minds. But if we use our imaginations, our possibilities become limitless.” – Jamie Paolinetti

I remember telling my grandmother about our adventures at Kennedy Playground.  She smiled and said, “Tootie Baby, imagination is the greatest nation in the world”.  I didn’t really get it then.  But, I get it now.  Imagination.