One of NASA’s2011 strategic goals is to promote the things that attract students into thescience, technology, engineering, and mathematics disciplines.  I’d like take the opportunity in Women’s HistoryMonth to talk specifically about some great contributions from some women inmathematics and perhaps to shout for joy about being a woman, a mathematician,and a part of the NASA civil servant workforce.

Hypatia of Alexandria lived approximately during the years370-415 AD.  She was the daughter ofTheon of Alexandria who was a teacher of mathematics at the Museum ofAlexandria in Egypt.  She studied withher father and taught in the Neoplatonist school of philosophy.  Though little historical evidence existsabout her, it is believed that she wrote on mathematics, astronomy, and philosophy.  She was known to dress as a scholar orteacher instead of in women’s clothing. She drove her own chariot which was not considered a norm for women’sbehavior.  As a woman who did not knowher place and one who espoused heretical teachings in astronomy regarding themotion of planets and the heavenly bodies, the Christian Bishop Cyril incited amob to riot and they attacked her and murdered her.

Alicia Boole Stott was the daughter of George Boole(well-known for Boolean logic).  She hada special intuition that helped her visualize objects in the fourth dimensiondeveloping a special interest in four-dimensional hypercubes also known astesseracts.  As a woman who lived1860-1940, she was not afforded a formal education in mathematics.  Married with two children, her husbandrecognized her talent and encouraged her to study with othermathematicians.  Eventually she publishedseveral papers and built many models representing four-dimensional figures withcardboard and wood.

Ada Lovelace, 1815-1852, was known as the first computer programmer.  She met Charles Babbage, the so-called Father of the Computer, and becameinterested in a concept he had for a mechanical device to compute values ofquadratic functions. She also became interested in some of his ideas of anothermachine which would use punched cards to read instructions and data to solvemathematical problems.  She had a visionthat these machines, the future computers, could go beyond mere calculating ornumber-crunching. 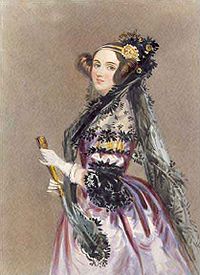 In lookingat the sketch of the lives of these women, you can see the potential that womencan offer.  This sketch illustrates theability that women have to fit in a man’s world, see in different dimensions, andsee the possibilities of things only imagined. In a study titled Women in the ITby the National Center for Women in Information Technology, it describes thespecial magic that women bring to teams in increasing diversity and enablingcreative innovation.

I chosemathematics in college because I loved figuring things out like Alicia, Iwanted to drive my own chariot like Hypatia, and like Ada, found these thingscalled computers lacked the humanity that made them useful to most people.

I have agirlfriend that studied physics in college. I asked her why she chose physics for a major.  She said that she really wanted to major inpsychology, but the line was quite long and went out the door.  Not wanting to brave the elements she wentinto the physics line without even knowing what physics was.  The advisors told her don’t worry; we willhelp you and tell you what it is.  Shefound her opportunities to excel in the safety and warmth of science.

To all theyoung women thinking about what line to get in, get in a line for science,technology, engineering, or mathematics. Dear ladies, the line is short, and the opportunities are many.  When you consider our study in thesediscipline areas along with our strength — skills in communication, intuition,and curiosity, WE women become people that you can truly count on.

5 thoughts on “Women in History: Counting on Women in Mathematics”