NASA EDGE now has a Facebook and MySpace page.  We already have many friends on our site and we continue to add more daily.  It’s great to meet new people who have a strong interest in NASA and space exploration.  I am new to the Facebook and MySpace world but my goofy co-host and marketing director seem to be on top of things.  If you have any advice on how a digital immigrant (host) can turn into a digital native (younger generation) then please pass the advice along.ChrisHost

NASA EDGE has launch a new feature called NE@.  These short segments will take a quick look at the exciting research and testing taking place at NASA.  The first short segment, NE@The Gantry takes an inside look at an airbag test for the orion crew module.  The team at NASA EDGE would like to hear your feedback on this new feature.  The plan is to produce a NE@ in between each new show.  Actually the reason why we are doing this is so that Blair can get the NASA 101 diploma much faster.
Thanks,ChrisNASA EDGE – Host 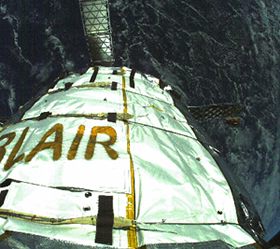 This is my absolute favorite photo from the upper atmosphere.

I had no idea that the folks at Genesis II were such fans of the show… or of the Co-Host.

NASA EDGE is clearly breaking new ground here.  This is our first official recognition by the space tourism industry.  If they had contacted me, I could have provided them with a photo.  As it stands, I’ll take the name.

So what is Genesis II?  If you’re like me, you probably thought it was a device that turned small moons into planets that sustain life.  As it turns out, that is not the case.  Genesis II is an experimental space habitat launched by Bigelow Aerospace just last week.  Though it is unmanned, it does include pictures and items provided by paying customers as part of their “Fly Your Stuff” program.

The real purpose, however, is to test systems that will be available on future Bigelow projects… ultimately a space hotel.

So, what does the future hold?  Clearly a front row seat to observe NASA’s missions from the marvelously appointed “Blair” observation pod.  Ok.  That isn’t true, but a Co-Host can dream, can’t he?