More than any other time in space exploration history, it’s an exciting age for educators and students to be part of. Before the end of the next decade, NASA astronauts will return to the moon.  This time, we’re planning to stay, building outposts and paving the way for eventual journeys to Mars and beyond.  Today’s students will be tomorrow’s explorers. In 2008, NASA will celebrate its 50th anniversary.  Sometimes, in order to look forward, we must take a step back to study the past. Because of this, we want to ask – What do you think is NASA’s greatest exploration achievement in the past 50 years and why? That’s the question this competition asks of students ages 11-18.  Sponsored by the American Institute for Aeronautics and Astronautics (AIAA), and in collaboration with NASA, the second annual 21st Century Explorer Podcast Competition challenges students to create unique audio and video podcasts.

Running from October 1 through January 4, this competition is open to United States citizens ages 11-18.   Students are grouped into two age divisions: 11-14 and 15-18.  Students in each division will submit an entry in one of two separate categories of their choosing:  audio podcast or video podcast.  First, second, and third place prizes will be awarded in each age group and category within that age group.  An additional “People’s Choice Award”, selected by the public, will honor one podcast for each age division. Only one entry may be submitted for each student.  More competition details and the entry form can be found at the 21st Century Explorer Podcast Competition website at http://www.explorationpodcast.com. All work needs to be original.  Any use of copyrighted material will disqualify the entry. So students, grab a computer, mic, and/or video camera and get busy.  The competition begins October 1, and ends after the first 1,000 entries are submitted in each category OR at midnight on January 4, whichever comes first. And teachers, encourage your students to put on their thinking caps, reflect on the past, and see how it connects to the future.  This is a wonderful opportunity to take a close look at where space exploration may take 21st Century explorers! Winners will be announced at the 3rd Space Exploration Conference in Denver, CO on February 28, 2008.  Following the announcement, all winning entries will be posted on the competition website.

What an experience of a lifetime.  The Desert RATS are a first class team.  We had the opportunity to witness NASA technology and field-testing in action. 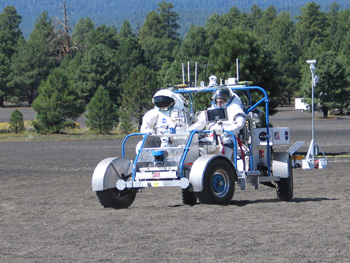 Two of the primary objectives we witnessed were for engineers to conduct a site survey for a lunar outpost using the SCOUT rover and to deploy some 200 meters of cable to enable a solar power system.  This system could potentially power important surface systems and lunar habitats on the moon. 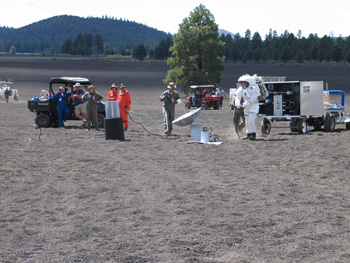 Of course it wouldn’t be exploration without the goofy co-host conducting his own experiments. 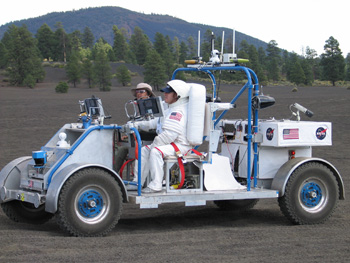 Blair Allen completes his SCOUT drivers license test.  According to Frank Delgado, “The license will be sent by mail.”  Kudos to the goofy co-host.  Credit: Franklin Fitzgerald

From what I saw today, I am confident we have the best engineers and scientists working on the lunar architecture. The Desert RATS are very dedicated and passionate about their jobs.  Engineers who’ve been working for NASA’s space program since the 1960s are training the next generation of engineers who’ll be responsible for future moon missions. 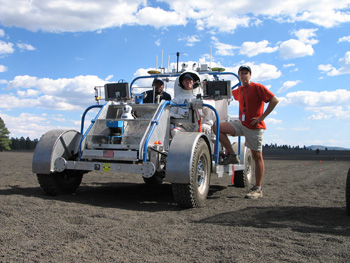 Franklin, Blair, and Chris pose for a quick snapshot.  Credit: Ron Beard
Special thanks to Barbara, Joe, Beth, Brandi, Frank and the Desert RATS team for providing us the opportunity to observe the field test.  You guys rock! 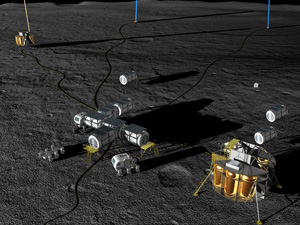 Imagine it’s 2020 and astronauts are working side-by-side on the moon with robots assembling the first lunar outpost.  Blair Allen, medianaut and host of NASA EDGE, is filming and recording the construction of the outpost from a distance in his own personally designed spacesuit.  Sound like science fiction?  Well maybe Blair being on the moon does; he still hasn’t achieved insider status.  But astronauts will one-day tag team with robots to build the first lunar outpost. In fact, tomorrow we are heading out to the Arizona desert to see the Desert RATS in action.  NASA’s Desert Research and Technology Studies (RATS) team will take over the dry dusty desert land of Arizona to test and torment some of the latest vehicles and gear in order to demonstrate operational concepts for lunar outpost assembly.  They also will be testing new spacesuit designs and measure human-robot interaction.The Desert RATS will be featured in an upcoming show of NASA EDGE where we take a look at some lunar architecture concepts and understand what it will take to live on the moon.  Oh by the way, remember we will be in the desert for quite some time and I am a little worried about Blair.  We need to remind him to drink plenty of water and watch out for the scorpions and tarantulas.  He is still searching for that radioactive spider that will allow him to crawl up buildings.  We may have to put a leash on him.We’ll post again on September 13 to share our adventures out in the Arizona desert.ChrisNASA EDGE Host

It’s been a while since we published a new post.  Blair has been studying for his NASA 101 exam the past few weeks.  I thought I would share some pictures with you on future show topics.  I don’t want to give too much away, but check these pics out. 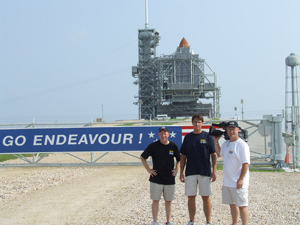 The NASA EDGE Crew with Endeavour in the background.  Credit: Don Morrision 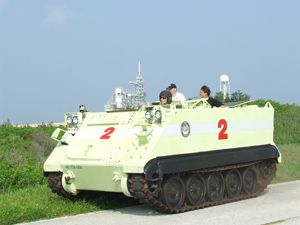 Chris and Blair go for a ride in the M113 behind pad 39B. Credit: Don Morrison 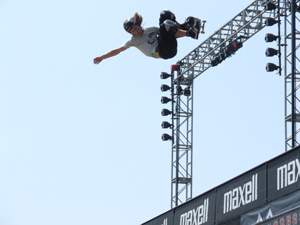 Shaun White practices on vert at X Games 2007.  Blair is in medianaut training and learning from the pros. Credit: Don Morrison 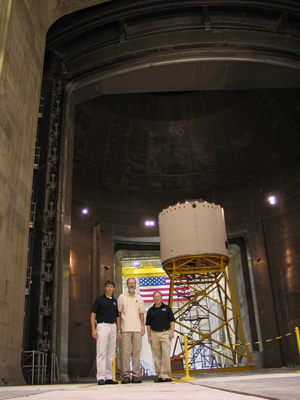 Chris, Dick, and Blair inside the Space Power Facility at NASA’s Plum Brook Station, OH.  This is the largest vacuum chamber in the world.  Credit: Ron Beard, Set Therapist

So there you have it.  A sneak peak at what’s to come.  Hopefully Blair will pass his exam and achieve insider status.  It’s starting to get old escorting him around to all these facilities.