The 3rd Space Exploration Conference in Denver, CO was highlighted by the more than 1800 Denver-area students that swarmed Education Alley over two days.  The NASA EDGE outreach program was able to give back by helping out Edcuation Alley sponsors, AIAA and Lockheed Martin. Check out some of the pics we took. 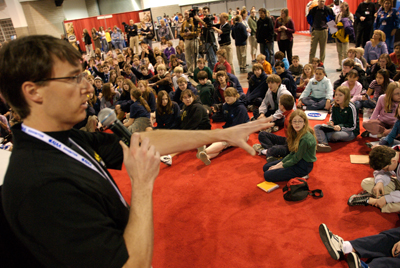 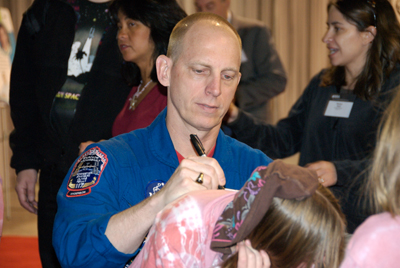 Astronauts Clay Anderson, Brian Duffy, and Bruce McCandless and uber cool spacesuit engineer, Heather Paul, answered many great questions from the students.  I was really impressed with the level of questioning from the elementary school students.  It looks like we have many bright future engineers and scientists ahead of us. 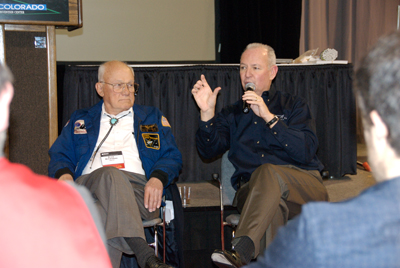 Bruce McCandless (MMU guy) and Brian Duffy talking to college students and volunteers.  Credit: NASA EDGE/Ron Beard
After Education Alley closed each day, the college students and volunteers received a chance to have an informal session with the panelists.  In the picture above Brian was explaining what it’s like to land the space shuttle.  Brian was a pilot on two missions and commander on another two. 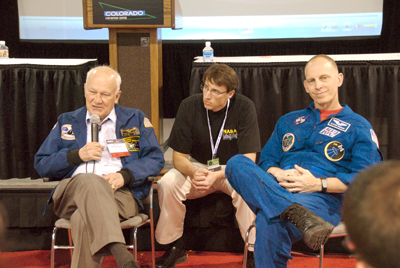 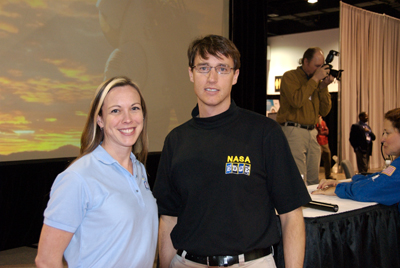 NASA Engineer Heather Paul and NASA EDGE Host Chris Giersch.  Credit: NASA EDGE/Ron Beard
We can’t forget to talk about the NASA exhibit.  Thanks to Todd Cannon at NASA MSFC for hooking us up with the prime spot.  As conference attendees and students walked into the exhibit, this is what they saw (minus Blair and Chris because we were working). 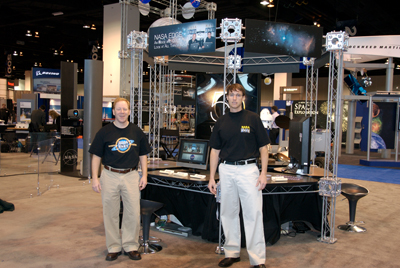 Check out Blair’s shirt.  I know it’s kind of small but what you do you think of the artwork?

By the way, NE@The Space Shuttle Sim is now ready for download.  We welcome any feedback, especially Blair’s role in lowering the landing gear.

Important Note: Unfortunately due to internal regulations we can’t accept posts that include a link to another website.