It’s true.  Both Chris and I were on the Mike and Mike show for our 15 minutes of fame.  Ron better sharpen up his ego management skills.  He is going to need it.  We had an absolute blast.First, everyone at ESPN was awesome.  Golic is every bit the giant that he is rumored to be, and “Greeny” is obviously the brains of the outfit.  From top to bottom both, along with their entire team, were extremely nice and courteous.  Golic even continued to talk to us as he plowed through NASA’s space version of fiesta chicken when the segment went off the air.  Greeny simply asked more and more questions about NASA.  It was awesome.  And I have to admit that I was totally star struck.  These guys are our heroes.Second, they are very excited about their upcoming interview with Astronaut Ken Ham during STS-124.  Before the show went live, you could sense their genuine giddiness about it.  It was really cool to see their excitement about NASA and NASA’s future, which we try to promote everyday.I also want to thank Michele Perchonok and all of the folks at JSC that provided the space food.  Golic admittedly doesn’t like tomatoes or fruity deserts, but he still gave them high marks.  Of course, we could find no evidence of the shrimp cocktail or the fiesta chicken by the end of the interview.  Clearly those more than passed the Golic test.  It was quite impressive considering that we didn’t even cook the space food in zero gravity*.

I also want to thank Mike “ESPN NASA Guy” Soltys and Scott Shapiro from ESPN.  Rocky Lind from NASA HQ can back me up on this.  These guys worked extremely hard to make this happen.  They are both fans of NASA and went the extra mile at every step to work out our appearance on Mike and Mike and also the upcoming interview with Ken Ham on June 13th.  Awesome.
Now, here are a few pics from our crazy morning. 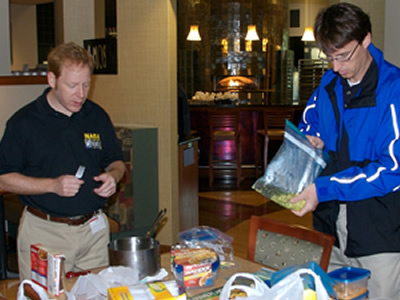 “This pan will not heat up without some kind of burner…”  Credit: Ron Beard

It’s True.  We made it on the show.  Credit: Don Morrison

What a Day!*I recognize that the official term may not be “zero gravity.”  Please accept this term in the spirit that it was intended… to be a punch line directed at our amateur preparation of the food.

What is the eZLS?  It’s the enhanced Zero-Gravity Locomotion Simulator.  Essentially it’s a vertical treadmill that can simulate walking or running in a reduced gravity environment such as on the ISS, the Moon, or Mars.  Blair and I had the opportunity to run on the treadmill to experience what astronauts go through when they work out on station. 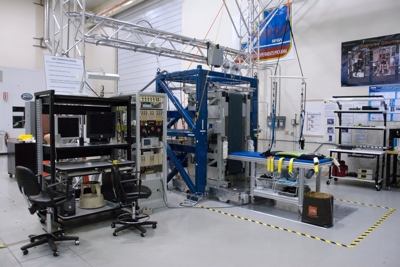 The eZLS inside the Exercise Countermeasures Laboratory at NASA Glenn Research Center.  Credit: NASA EDGE/Ron Beard
This piece of equipment is housed at NASA Glenn Research Center and is part of the Exercise Countermeasures Laboratory.  I have to say this is one cool piece of technology.  The goofy co-host had first crack at the treadmill.  He came in wearing colorful and loud workout gear sporting 1980’s socks and headband.  I think he watched Chariots of Fire before the shoot. 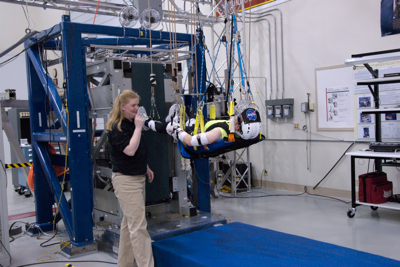 Kelly Gilkey makes sure Blair is ready to go on the eZLS. Credit: NASA EDGE/Don Morrison
Check out our Facebook page to see more pictures of Blair stretching and posing for the camera.  Next it was my turn and my dress was a bit more reserved.  I consider myself a runner so I was really paying attention to all the details.  Kelly Gilkey made sure everything looked good and that I was secured. 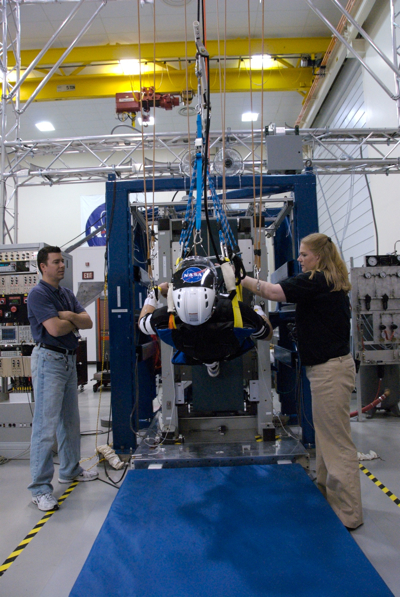 Chris is running vertically for the first time in his life.  Credit: NASA EDGE/Don Morrison

I started out by walking at a 3.5 mph pace.  It took about 30 secs to a minute to get accustomed to the treadmill.  At first I felt my feet going everywhere and the force plate, which is free floating was moving in all directions.  Once I got the hang of it I then started with a light jog (5.5-6.0 mph).  The treadmill was very fluid and easy to run on. I never passed 7.0 mph due to time constraints but next time I would like to bump it up to 9 – 10 mph to get a good workup or maybe run a half-marathon. 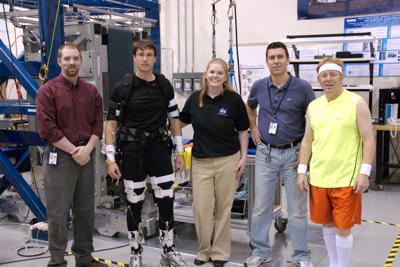 I apologize for the long delay in posting to the blog.  We’ve been extremely busy lately and finally have caught up on most of our work.  The NASA EDGE team and I at least want to share with you some pics from Yuri’s Night Bay Area at NASA Ames Research Center in Moffett Field, CA. 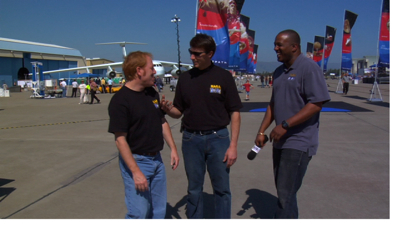 Blair, Chris, and Everyman (Franklin) are trying to recover from messing up the opening. Credit: NASA EDGE/Ron Beard
We were impressed with the organization of the whole event.   There were a number of exhibits both in the hangar and out on the tarmac.

There were so many people dressed up in all types of costumes.  From superheroes, to space aliens, to the bizarre, we had a chance to stop and chat with a few of them. 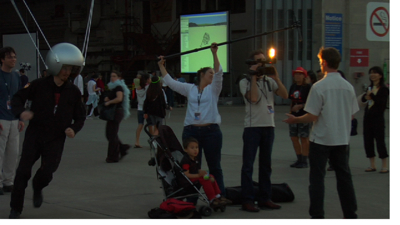 There were some cool events going on at night.  Check out the pic below. 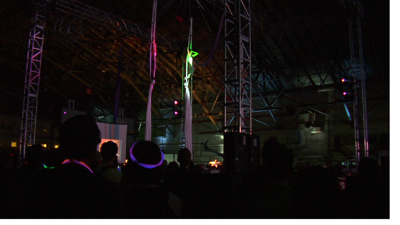 I think the highlight of Yuri’s Night Bay Area 2008 was Shuttle Bay Confessions, a NASA EDGE exclusive Extra Studio Activity (ESA).  We gave YNBA participants a chance to answer some questions in the shuttle bay.  Well, actually they were sitting in front of a green screen.  You’ll have to wait until the segment is released.  You won’t believe some of the answers we received.

Special thanks to Kelly Humphries, Public Affairs Lead at NASA Ames, for handling all the logistics and making our life much easier plus giving Blair the opportunity to ride in a Pitts aircraft.

Blair is excited about the Hammerhead maneuver.  What a ride! Has he achieved insider status?
See you guys next year at YNBA 2009!

Kim Land, Public Affairs, Outreach and Education Manager for the Exploration Technology Development Program (ETDP), provided us the opportunity to shoot NE@ segments on the lunar manipulator arm and the inflatable lunar habitat. Both are just concepts and in not in anyway the final product.

I really love this perspective of the lab.  Above us is the lunar manipulator arm and to the far right is the inflatable lunar habitat concept.  The arm actually lifted the airlock structure (the one with the American flag) for the first time right after our shoot.  The structure is designed to lift 1 metric ton on the lunar surface at the tip of the arm or approximately 150 kilograms on Earth.  Because the airlock mockup weighs about 220 kilograms the manipulator arm lifted the airlock from the elbow.  The arm can lift about twice as much at the elbow compared to the tip.  John Dorsey will provide more info on the arm in the NE@ segment. Also, check out the cool backdrop. 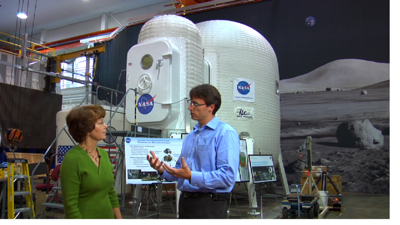 Chris is learning more about the inflatable lunar hab from Karen Whitley.  Credit: NASA EDGE/Ron Beard
Next, Karen Whitley gave us the scoop on the inflatable lunar habitat concept.  I am sure most of you have seen this concept on the NASA Portal but it was pretty awesome to take a tour inside.  NASA and ILC Dover are studying cool ways of developing inflatables that will endure harsh environments i.e. the lunar surface. 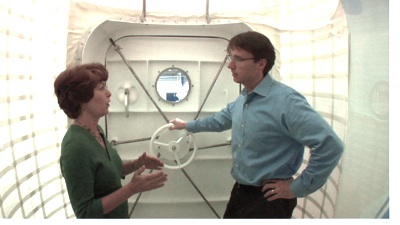 Karen explaining to Chris the purpose of an airlock.  Credit: NASA EDGE/Ron Beard 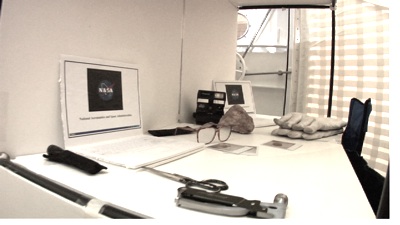 Work space concept inside the hab.  Credit: NASA EDGE /Ron Beard
This particular concept which is about 50 m3 is designed for two astronauts. The actual habitat will need to be much bigger, say around 150 m3.  In fact, I’ve tasked Blair to live inside the hab for a week as part of his medianaut training.  I don’t think he’s seen the official email yet so let’s see how long it takes for him to respond to this post.

Special thanks to Kim Land, John Dorsey, and Karen Whitley for allowing us to shoot in the structures lab.  You guys rock!

On January 8, we had the privilege of covering NASCAR Thunder at the Daytona International Speedway for our upcoming NASA EDGE vodcast on the Daytona 500.  In case you don’t know, 2008 marks the 50th running of the Daytona 500 and it’s NASA’s 50th anniversary.We had the pleasure of working with Astronaut Drew Feustel.  He’s part of the STS-125 mission that will service the Hubble Telescope in August.  Drew had a chance to meet some of the drivers, pit crews, and hang out with fans at the event.  Initially we thought that Drew would not get much attention because how can you compete with the likes of Jeff Gordon, Jimmy Johnson, and Kurt Busch?  We were wrong.  Drew had his own entourage following him asking for autographs and pictures.  Everyone was excited about his upcoming flight in August, especially the drivers themselves.   Check out some of these cool pics. 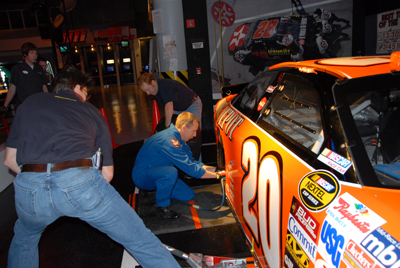 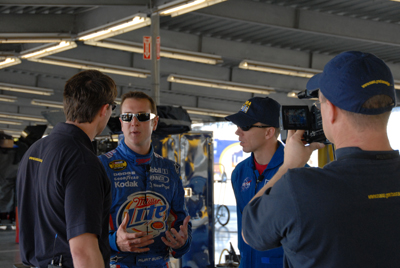 I want to thank Rocky Lind from NASA HQ for setting up this interview for us.  Kurt Busch was very cool to work with, and he was very eager to learn more about what Drew does as an astronaut.  We talked about the similarities between a NASCAR driver and an astronaut and the benefits of NASA technologies in racecars. 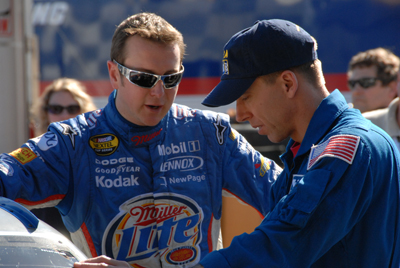 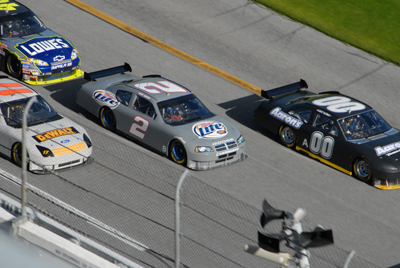 Kurt Busch in the #2 taking a few practice laps. This picture
was taken from the top of the Daytona 500 tower.
Credit: Ron Beard/NASA EDGE 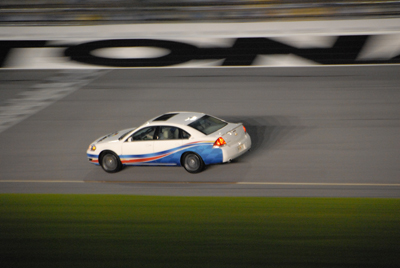 Blair, Ron, and Drew take a few laps around the track in a
Chevy Impala SS.  Credit: Don Morrison/NASA EDGE

This was the highlight of the day.  We had the opportunity to ride around the track a couple of times in a 2008 Chevy Impala SS.  I’ve never experienced going into a 31 degree banked turn.  What a rush! 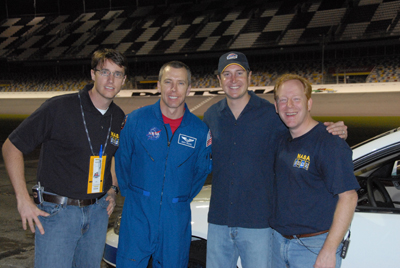 We’ll be back in Daytona during the Rockfest events the week before the Daytona 500 to finish filming.  Blair and I can’t wait to hang out with the public around the NASA Exhibit.  If you’re in Daytona on Feb. 12, 13, 15, and 16, come by the NASA exhibit and say hello.