The following proposal was offered officially during our most recent Vodcast, NASA EDGE: Daytona 500.  I am posting it here in order to officially begin my campaign.

As of today, June 17, 2008, I am officially putting my medianaut pursuits on hold.  Instead, I am offering my talents, gifts and insight to NASA in a new capacity.  I am starting my own campaign to become NASA’s first Commissioner of Astronautics.  My campaign features four platforms designed to help NASA engage the public more directly in the exploration of Space.  As commissioner, I propose the following:

1.    Institute an annual Astronaut Draft (similar to professional sports drafts) wherein each directorate or division would receive a predetermined number of draft picks to fulfill their missions each year.  The draft would not be limited to rookie selections.  Veteran Astronauts would be eligible in the first year, but directorates could hold onto their best astronauts just like keeper leagues.

2.    Create a series of Astronaut Scouting Combines to help the various directorates/divisions gauge the skills within the NASA Astronaut talent pool.  These combines would be occur prior to the draft at key training facilities such as the NBL, Desert RATS, M113 Obstacle Course, etc.

3.    Merge the Mission schedule with a solid Playoff Model.  This is the most difficult, so I am willing to look at more of a merge between the Mission schedule and the bowl game system.  Each Directorate, based on performance, would receive a mission bid, just like bowls.  Those missions are then sponsored by commercial entities.  For example, the Lens Crafter Hubble Mission, or the Home Depot ISS Servicing Mission are possible.

4.    Developing a marketing manifesto to manage the huge amount of Public Relations opportunities.  Fantasy NASA.  Mission Play-by-play and color commentary, where you actually have the missions called by a team of broadcasters – live.  Another idea, again from professional sports, might include a live concert at NASA Kennedy Space Center for the fans just prior to launch.

I know that these ideas are radical, but I think I am on to something big.  Can I count on your support?

Get out and vote!  Photo Credit: A valued Blair 08 Campaign Volunteer

I hope Blair finds his way back from Tashi.  We noticed a few stormtroopers following him into an alley.  In the meantime here are some more pics from Tatooine or Moses Lake. 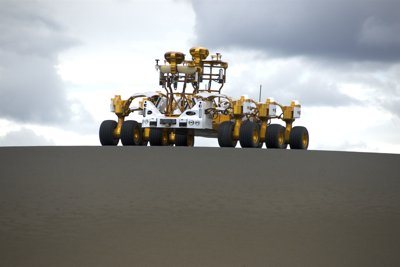 Great shot of Chariot on top of the hill.  Credit: NASA EDGE

Someone needs to photoshop this pic with a space backdrop and Earth in the background. 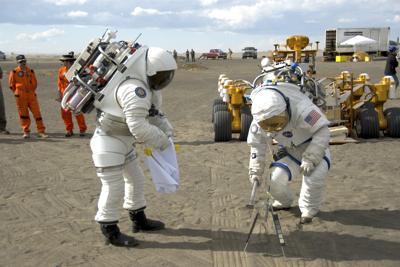 Spacesuit testing at Moses Lake.  Credit: NASA EDGE
We forgot to mention the Desert RATS in our first post.  Joe Kosmo and Barbara Romig, pictured in the orange jumpsuits to the left,  lead the Desert RATS.  They are top notch professionals with a great sense of humor.  You’ll see them again in our NE@ segment at Moses Lake. 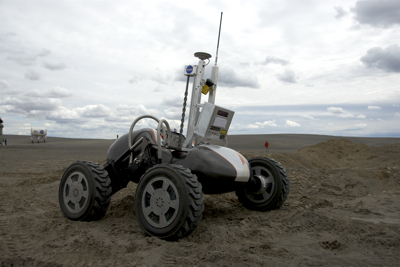 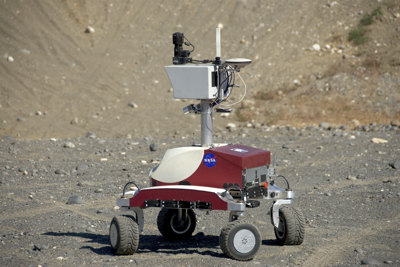 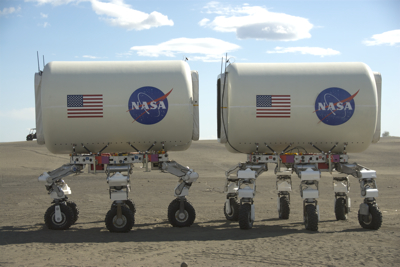 This could be Blair’s new lunar home.  Credit: NASA EDGE
Two ATHLETES, each carrying a mock lunar hab, joined together to simulate the connection of two hab modules.  The ATHLETEs in the picture above are only 1/4 scale versions.  Imagine having an ATHLETE four times the size working on the lunar surface….very cool!

Thank you for all the cool comments from the previous post.  We had a great time in Moses Lake, WA.  The people are very friendly and hopefully we can go back in the future.  Wait a minute…somone just came out of hyperspace.   I better sign off before I get hit.  All the best, Chris (Host).

BTW, Blair here.  I was not captured by stormtroopers.  I was accidentally sucked up into a sand crawler.  It took me longer than expected to escape due to a bad motivator.  Sigh.  On a more serious note, I did want to give props to our orange suited friends.  Chris was kind about it, but I totally forgot to mention in my previous post that they were not working specifically on Chariot.  They were specifically working on the space suites – both real and mock up versions.  So when you see pictures of them, the suits, or me looking sheepish, remember that even though we are a big team, Barb and Joe were primarily the keymaster and gatekeeper of the suits during the mission at Moses Lake (sorry to mix Star Wars and Ghostbuster metaphors.)

If Luke could have put NASA’s Chariot, ATHLETE, K-10 and the LSMS on the south ridge near his home on Tatooine, he could have joined the rebellion much sooner, avoided kissing his sister and even saved his father.

Okay, maybe I’m stretching things a little bit.  But after only 10 seconds of seeing these vehicles in action, it is tough to supress my enthusiasm.We arrived late in the afternoon in the thick of multiple simulations.  The pictures don’t quite capture the 20 mph wind, dust devils and chaotic temperatures, but each projects’ team and hardware didn’t seem phased.  They were vigilantly putting everything, including themselves through the data collection ringer… And loving every minute of it.  I have to hand it to them all.  They are real troopers.Enjoy the pics.  I’ve got to go to Tasha Station to pick up some power converters. 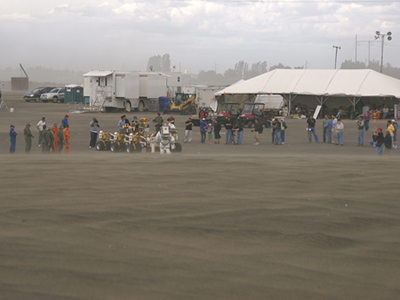 Seriously, the wind was a factor.  Credit: Blair Allen 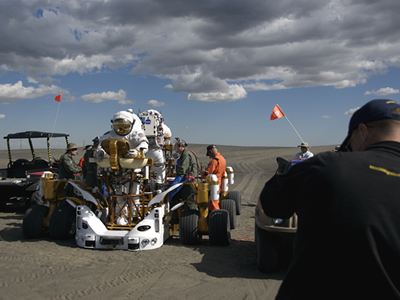 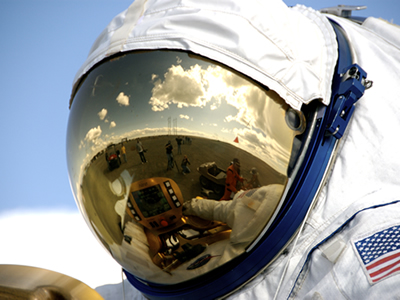 “Blair, I am your father…”  Credit: Blair Allen (in reflection) 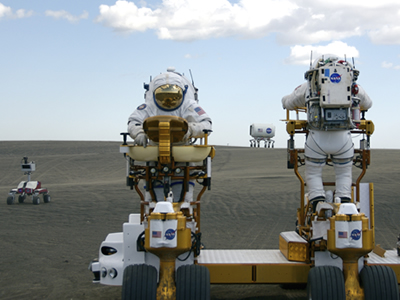 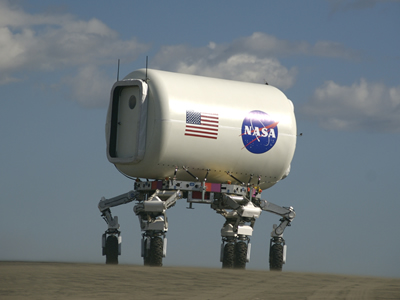 Hope you enjoy the pictures.