The NASA EDGE team had the opportunity to visit Ames, Iowa to assist the staff that work the NASA Exploration Experience trailer.  Ames was the last stop in the Iowa State tour.  The trailer also visited West Point for the 56th annual Iowa Sweet Corn Festival and the Iowa Children’s Museum in Coralville.  Approximately 5,400 people took the opportunity to go inside the trailer to learn about NASA’s plan to return humans to the moon.  You can learn more about the Exploration Systems Mission Directorate’s Communications and Exhibits at https://www.nasa.gov/directorates/esmd/outreach/index.html. 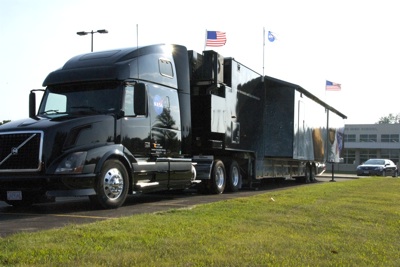 While visiting Ames High School, the team had the privilege of interviewing the winner of the 2nd Annual 21st Century Explorer Podcast Competition (vodcast, 15-18 age group), Kristina J.  The podcast competition was sponsored by Lockheed Martin and AIAA in collaboration with NASA. Kristina had to answer the question, “What do you think is NASA’s Greatest Exploration achievement in the past 50 years and why?”  Her vodcast titled, “Hello From the Children of Planet Earth”, discussing the important discoveries made by the Voyager spacecrafts. 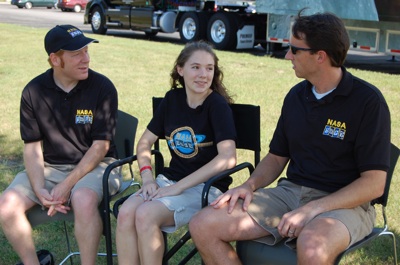 Kristina has a very bright future ahead of her.  Entering her junior year, she wants to be an aerospace engineer and work for NASA (good news!).  She also has a lot of experience with film and production.  We were able to witness first hand her shooting abilities at the trailer.  In fact, if Blair ever makes it as a medianaut and flys to the moon, then we have the perfect fill in as co-host.  You can see her interview on the next NASA EDGE vodcast slated to be released on Sept. 16.

Here are a couple of more pics we have to throw in. 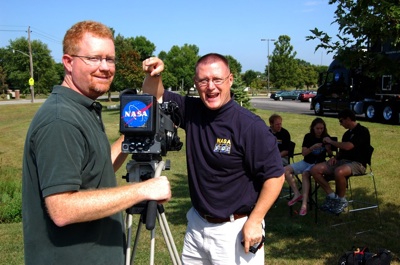 Ron giving props to NASA MSFC videographer, James Bilbrey.  Credit: NASA MSFC/Mick Speer
James Bilbrey (NASA MSFC) was tasked to shoot video for the NASA Exploration Experience, however, he actually helped us out with our shoot.  Kudos to James and Mick Speer for helping us out with audio.

Okay, here is one last picture – the women of NASA MSFC.  What a great group of people to work with! 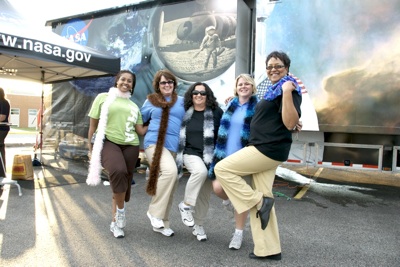 After a long day in the hot sun they still had enough energy to smile for the camera. Bonus points if you can name any one of them.

Don’t forget our next vodcast comes out on September 16 – NASA EDGE: Folklife Festival.

Blair had a problem with a power converter on his T-34 heading to Tashi Station, and Mos Nocohost was the nearest place that sold power converters.   As we approached Black Point Lava Flow, we happened to see a bunch of tents in the distance.  Using stealth like techniques, we decided to investigate.  Avoiding all imperial entanglements, we managed to get some cool pics of a very cool looking small pressurized rover concept. 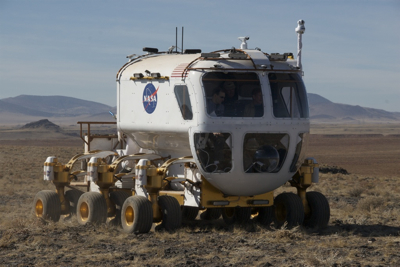 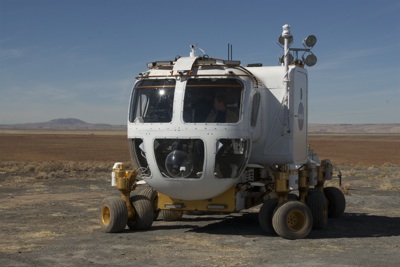 The SPR concept offers many advantages over the rovers of the Apollo days.  It will increase the potential range of exploration, provide protection for the astronauts, reduce the amount of time astronauts must wear pressurized suits and allow for more scientific research. 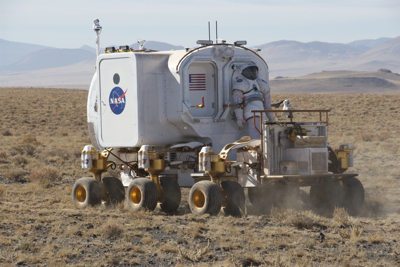 The SPR in action.  Credit: NASA EDGE
Another unique advantage of the SPR system is the crew lock concept, providing a rapid EVA ingress/egress.  The crew lock will allow the crew to enter and exit the EVA suit while never having to bring the suit inside, keeping the internal space mostly free of dust. 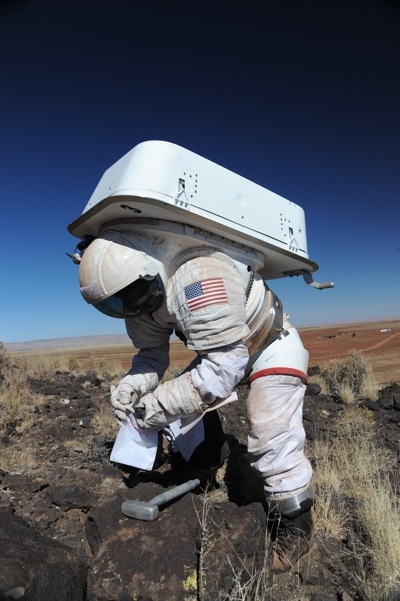 Well, the second power converter died on the T-34 and we were stuck out on the lava flow with no transport to get to Mos Nocohost.  As the Sun drifted away below the horizon and temperatures falling near freezing, I asked Blair if we had a back up plan.  “Back up plan?” responded Blair.   Have no fear, SPR is here.   The SPR team is a great group of engineers and technicians. They definitely have the “right stuff” and have been working hard the past couple of years on lunar rover concepts.  In fact, they managed to find time to bail us out and provide a lift into town. 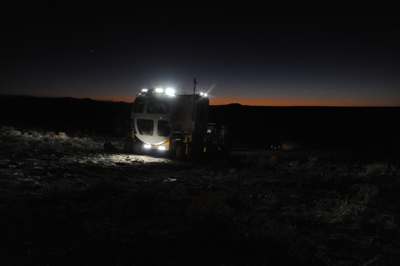 We had a great time covering the SPR test at Black Point Lava Flow in Arizona.  Look for an NE@ segment in the next month or so featuring Astronaut Mike Gernhardt taking us on a test drive in the SPR.

We are very fortunate to be part of the Constellation Program.  It’s been four years since President Bush announced the plans to return humans back to the moon and then on to Mars and beyond.    The cool part about our jobs (besides looking for a new co-host) is that we get to see some awesome hardware.   Check out two of the many projects going on at Langley to support Constellation. 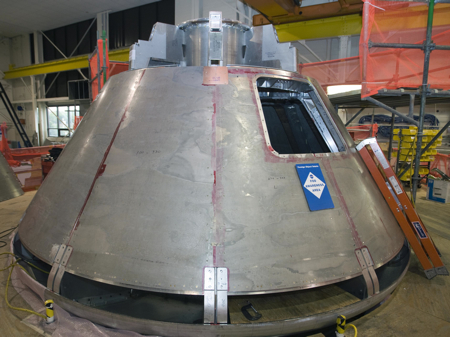 Fabrication of the Pathfinder crew module, one of NASA Langley’s current space hardware projects, is nearing completion.  Upon completion, Langley will transport the Pathfinder crew module to the White Sands Missile Range in New Mexico where it will be used in preparations for Pad Abort-1, the first unmanned test of Orion’s launch abort system.  Rumor has it, the co-host may travel on this pathfinder just like he did in the Orion Flight Test Article (See NE@Orion FTA for more details on the FTA).  HDTV is optional on the trip. 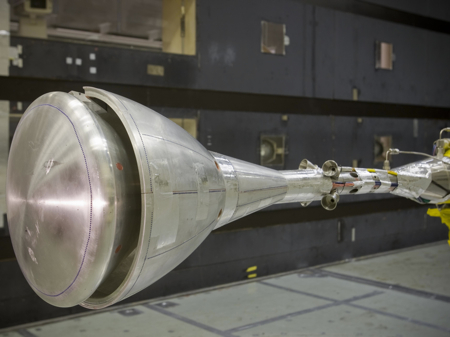 During this test, researchers investigated the interaction and effects of the launch abort system’s jettison motor plume during the separation of the abort system and the crew module.  The plume of the rocket motor was simulated with high-pressure air.  The jettison motor, one of three solid propellant motors in the launch abort system, is designed to separate the spacecraft’s abort system from the Orion crew module during launch.  Unfornuately the co-host could not participate as a crew member in this test.  Even though he barely fit in the crew module, Blair had a tough time closing the hatch.  You can’t win them all.

These are just two of many many projects going on at NASA Field centers across the country.  We can’t wait to head out to White Sands to cover Pad Abort-1 and down to KSC to cover Ares 1-X.

On a side note – Congratulations to SpaceX!