What a great mission so far for the crew of Atlantis.  It’s been fun the past week watching John Grunsfeld, Drew Feustel, Mike Massimino, and Mike Good work on Hubble.  It was also great to see the entire crew (including Scott “Scooter” Altman, Greg “Ray J” Johnson, and Megan McArthur) during the live press conference from space.  The NASA EDGE team will never forget this mission because we had the chance to hang out with the crew, especially Drew Feustel and Mike Good.  It started back in 2008 when we first met Drew during the Hot Laps event at Daytona International Speedway.  NASA was celebrating its 50th anniversary and Daytona was celebrating the 50th running of the Daytona 500.  We shot Drew for our “Last Mission to Hubble” vodcast.  If you haven’t seen it, go to https://www.nasa.gov/multimedia/podcasting/nasaedge/NE00_Last_Mission_Hubble.html. 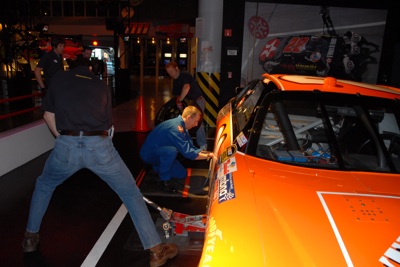 I still think the training in the above pic helped Drew muscle a tough bolt loose during EVA 1.  A couple of weeks later we met Mike Good at the Daytona 500 race.  We also shot him for the Hubble vodcast.  Mike hung out with us all day and he had a chance to sign autographs. 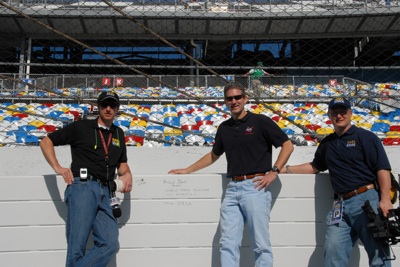 Mike actually signed the track wall and we have some good close-ups of it.  In fact, we are convinced this was part of his training to actually sign his name on Hubble during his last EVA.  Still waiting to hear from Mike if he did this.

We shot the rest of the crew at NASA Johnson Space Center.  I don’t have a picture of it but Mike Massimino scared the daylights out of Blair.  Imagine a 6’4″ broad shoulder guy standing in front of a 5’0″ red headed co-host (very intimidating).  But seriously, we all had fun and the crew was very accomodating with our needs. 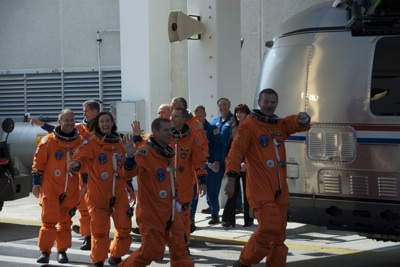 The crew walk out was really a huge deal for us because we heard Mike Good give us a shout out.  In fact you can hear it on our latest NASA EDGE vodcast on STS-125.  Download it today at https://www.nasa.gov/nasaedge. 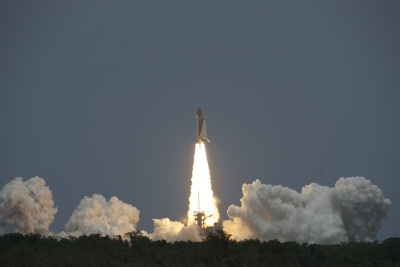 The launch says it all.  We have been very privileged to have worked with this fine crew and get the chance to spend some time with each of them.  I know we’ve covered other shuttle missions in the past and probably will cover more in the future but I believe this will be a NASA EDGE favorite.  This is our adopted crew and mission.  They did it right and everyone should be proud of their accomplishments.

I do have one final wish.  Scooter is responsible for “buzzing the tower” during the movie “Top Gun.”  Will he buzz the tower or VAB one final time?

Congratulations to the STS-125 crew and have a safe reentry and landing on Friday. 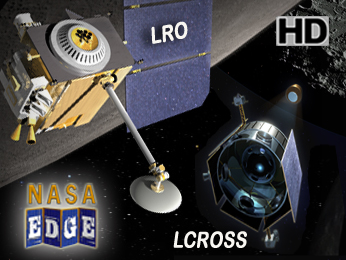 Here is a nice little piece of advice.  Download the LRO/LCROSS vodcast (https://www.nasa.gov/multimedia/podcasting/nasaedge/NE00_LRO_LCROSS.html), watch intently, save up some money, go buy a nice lawn chair, a good 10-12 inch telescope and invite over some friends for one of the coolest scientific events since JJ Abrams decided to make the prequel to the Star Trek TV series.  My friends, witness LRO and LCROSS.

Of course, the LCROSS impact won’t happen for a few months, and by that time LRO will have plowed through many of its objectives.  But what you might be able to see (I’m probably not correct about the specifics of my party preparation advice) is the impact plume of LCROSS’s Centaur module after it slams into the surface of the Moon.  Ordinarily this kind of destructive behavior is limited to Mythbusters, but NASA stands to gain tons of scientific data that will help us understand more about our Moon.  Perhaps we will bust a few myths in the process.

When you see the show, you’ll know a little bit more about what I mean.  Be sure to check it out.  Of course, if you have questions and comments, please leave them here.  I’ll be checking.  I’m trying to plan my own LRO/LCROSS impact party, and I could use a few good ideas.