Triboelectrification tried to thwart NASA’s first flight demonstration for the next generation manned space flight program, however, it came up empty as the Ares I-X flew beautifully into the Florida sky. 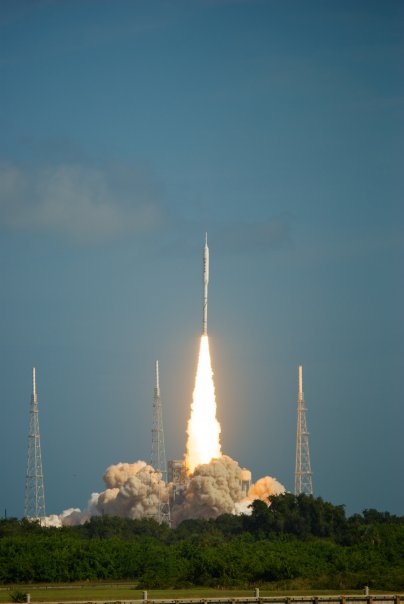 All initial signs of the flight demonstration are good.  Of course, Ares I-X’s real success will come several weeks from now when all of the data is collected, analyzed and utilized to develop a new space flight vehicle.  This data is exactly what triboelectrification could have compromised.

What is triboelectrification?  Quite simply, it is what kids have been doing to their siblings and friends for years; shuffling their feet and shocking their intended targets with an unsuspecting electrically charged touch.  Obviously, in the case of Ares I-X, there were more significant consequences than an angry peer.

Let’s break the word down.  Tribo is the Greek root, meaning friction.  According to the Oxford English Dictionary, tribology “is the study of friction, wear and lubrication and the design of bearings; the science of interacting surfaces in relative motion.”  So, the big concern around launch time of Ares I-X was that building electrostatic charges would be created by the friction created on and around Ares I-X during the flight.  If those electrostatic charges discharged onto the rocket, many of the data collecting sensors might be compromised.  If the data was compromised, NASA would have an aesthetically pleasing flight to remember but very little data to use to improving the vehicle.

The next obvious question is why tribolelectrification isn’t a concern for other launches (Saturn V launches, Shuttle launches, etc.)? The decals on Ares I-X were a possible culprit.  If that is true, then NASA should have used the very popular Triboelectrification NASA EDGE stickers/decals.  I can’t vouch for the other vehicles, but my guess is that NASA EDGE will be an intregal part of the soon to be formed anti-triboelectrification task force.  The first order of business; all wool sweaters, hush puppies and shag carpet will be banned from NASA Centers.  It is a symbolic move, to be sure.  But it is a start.