Sorry about the dramatic, red text, but the reminder is necessary.  The site is up early for testing purposes.  Even though votes are being cast, they will not count for the contest.  We have to make sure everything is functioning properly before going live at 9:00am.

Anyway, this is the place to talk about all things 2009 NASA Mission Madness.

For the moment, forget SPB, forget the Hubble breakdown, forget it all.  A couple of match ups came down to a few last minute votes.

IF the results hold (and they should,) Voyager 1 & 2 beat Cassini by 29 votes and Expedition 1 beat MRO by 84 votes.  Throughout the day, these missions swapped leads and battled for advantage.  You can whine about SPB and multiple voting all you want, but there was drama at 11:59pm, and it was AWESOME!

Congratulations to everyone, and specifically to Voyager 1 & 2 (Vger lives) and Expedition 1.  You fought hard and won!

Well, you get one day to rest, and then back to voting.  Although, SPB can probably take a few extra hours off and still win.

Round 3 should be fun.

Check out the match ups and then get ready to vote.

See the results for yourself here:  http://mission-madness.nasa.gov/mm/results.html?1

My bracket is trash, I have no one left to pull for…

Round 1 Delivers a shocking upset and plenty of drama!
As one of our guests said on the vodcast… “Rovers can’t throw touchdowns.” 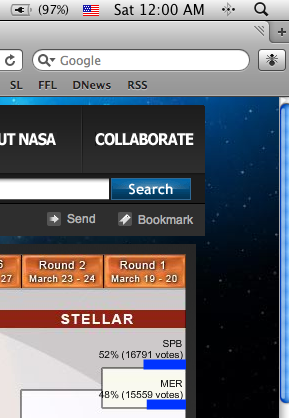 No tournament would be complete without an upset or two, but the stunner between MER and SPB will be talked about for years to come.  48 hours ago MER fans were talking about who they might face in the championship.  Now they are talking about what went wrong.  Meanwhile SPB is flying higher than ever, aloft and heading into round 2 with a lot of momentum.  Unbelievable.

Round 2 should be interesting.  You can visit the results page for your own analysis:

Here are the likely match ups for round 2:

There you have it.  Baring some bizarre database anomoly, These are the round two match ups.
Let the trash talking continue…

The story lines for the tournament are starting to take shape, and there are some early surprises.  If you have any reactions, thoughts, issues or taunts, start posting.

Make your case to fellow fans, and get out the vote!

P.S.  You have to love Hubble’s taunt of the day… They said they could beat Aura with their bad lens.  Cold, but after looking at the early numbers, it may be the cold, hard, truth.  What do you think?

P.S.S.  This has to be the real shocker…

Looks like the Mars Rovers need to send back images of some more votes!

Until now, 2009 Mission Madness has had only minor, anticipated controversy.  An agency with hundreds of valuable missions will certainly go through some expected growing pains as they narrow the field of competing missions.

Tonight, however, features a new controversial second front.  Mr. Gerstenmaier is appearing tonight on the excessively popular and influential news show, The Colbert Report.  Even if Mr. Gerstenmaier doesn’t mention any of Space Operations’ 16 participating missions, will his appearance have an unfair influence on 2009 Mission Madness voting?

As self appointed Commissioner of Astronautics, medianaut, and 2009 Mission Madness watchdog, I may have to look into this matter further.

What do you, the real voters, have to say? 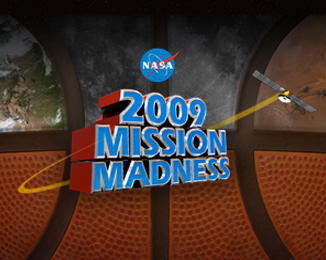 Ok, we are literally hours away from announcing the field of 64 Missions competing in 2009 Mission Madness.

So, I would like to suggest the following guidelines to ensure a successful outcome:

1.    Print and fill out 64 brackets to account for all winning scenarios.

2.     Fill out your bracket in pencil in order to make adjustments less obvious.

3.    Create decoy brackets for your friends that disagree with you.  When they leave their desk to go to a meeting, switch their bracket with your better bracket.  If you do this enough, you may actually influence their votes.

4.     (For those folks whose favorite mission was overlooked) Find out who is actually on the selection committee, befriend them, use your skills of persuasion to influence them in the selection process for next year.

5.     Vote like mad.  Voting doesn’t begin until the 19th, but you are allowed to vote as many times as you like.  So, print your bracket next week, and then when voting begins, vote away.  NOTE: By following guideline number 3, you can possibly reduce your need to vote incessantly by half.

This list is not complete, but it should offer some initial strategy to select the winner for 2009 Mission Madness.

Of course, you could just download the NASA EDGE 2009 Mission Madness Selection Show on Monday and vote for the missions that the Co-Host is supporting.  Just a thought.

“40 years later, and the Apollo astronauts still have a better 40 yard dash time than any rover.”

“Apollo 11 was great, but where is the science.”

“You might want to keep an eye on Expedition 16.  They have quite a following.”

“Lunar Prospector 1 was the original LCROSS”

“Orion?!?  That’s like nominating a film in pre-production for Best Picture.”

Get used to it, folks.  This is what you will be hearing over the next three weeks as people begin to sort through and size up the matchups for the 2009 Mission Madness Tournament.  And this is where you want to come to make your case for your favorite mission (ER2 is the real front runner) or trash missions that face some pretty tough odds*.  Of course, there are also plenty of missions that didn’t make the field of 64.  We really want to hear from you.  Remember, all information exchanged during this year’s competition will be evaluated by the Selection Committee for next year’s competition.  So don’t be afraid to let your opinions be known.

Good luck, and may the best mission win!

P.S.  I know I don’t need to say it, but please refrain from using profanity, foul language or any other abusive language.  Not only is it not going to be posted… it will count against your mission.

*2009 Mission Madness does not support gambling of any kind.  The use of the term odds here is merely coincidental.

Here are some pics of the Ares 1-X Crew Module/Launch Abort System (CM/LAS) being loaded into an Air Force C-5 cargo plane.  Enjoy. 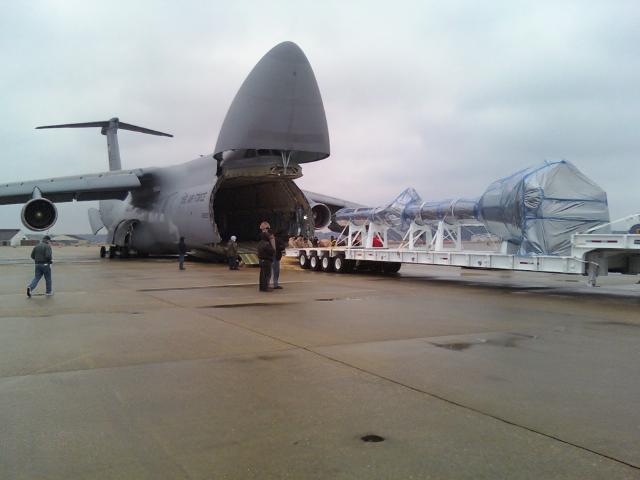 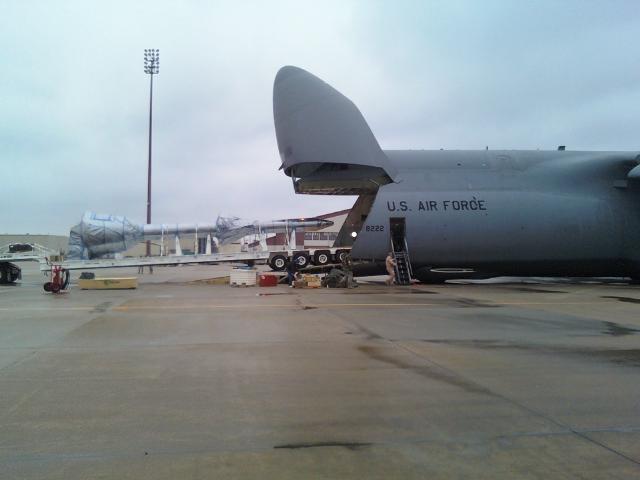 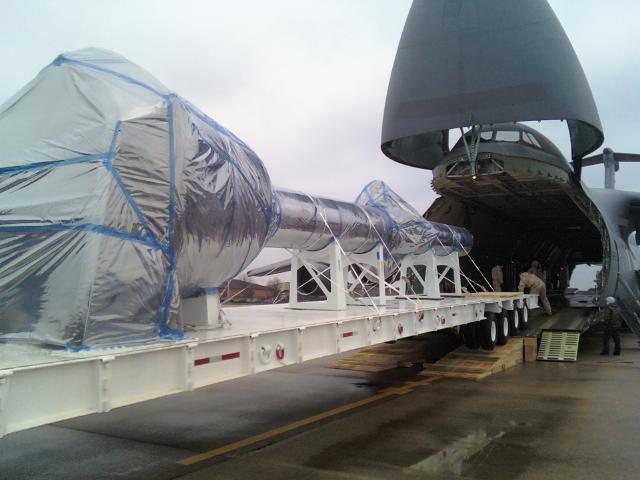 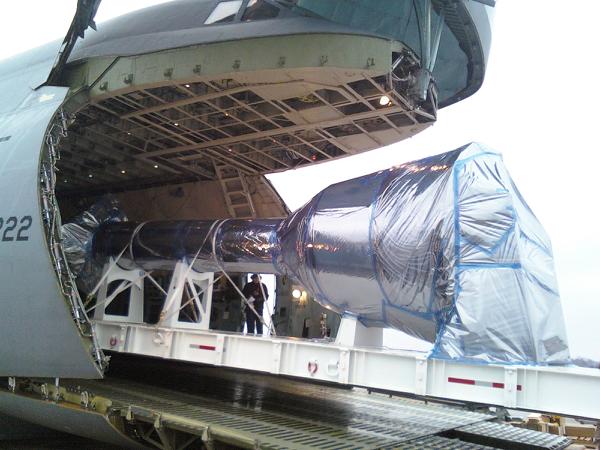 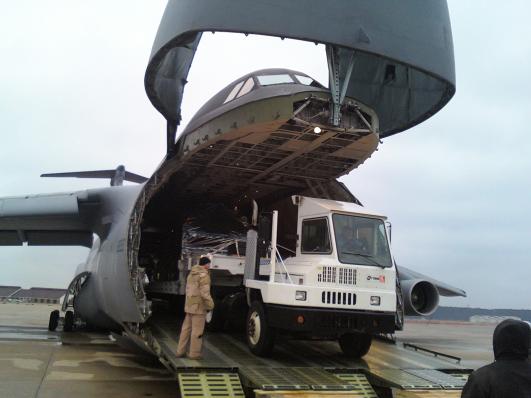 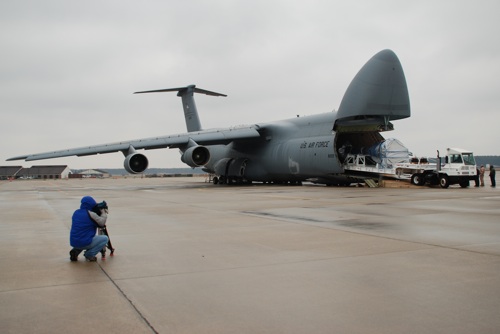 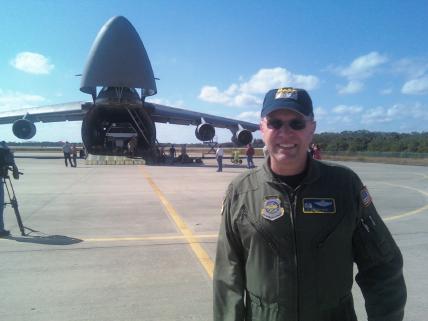 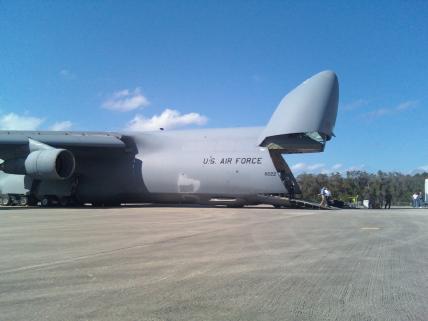 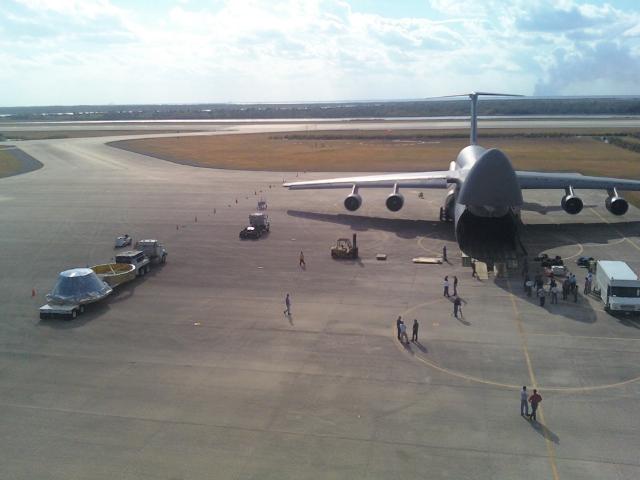 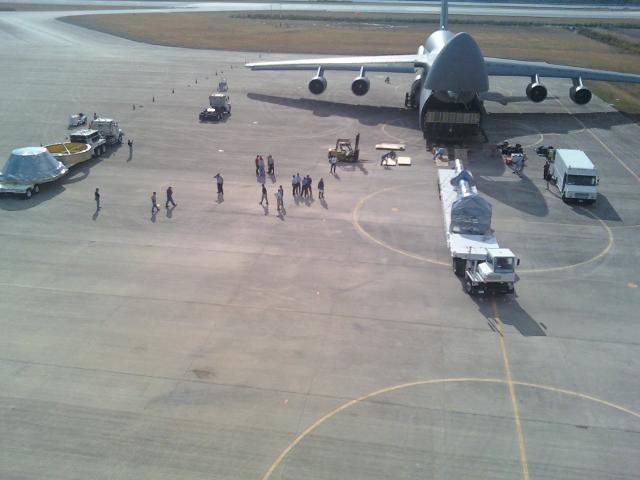 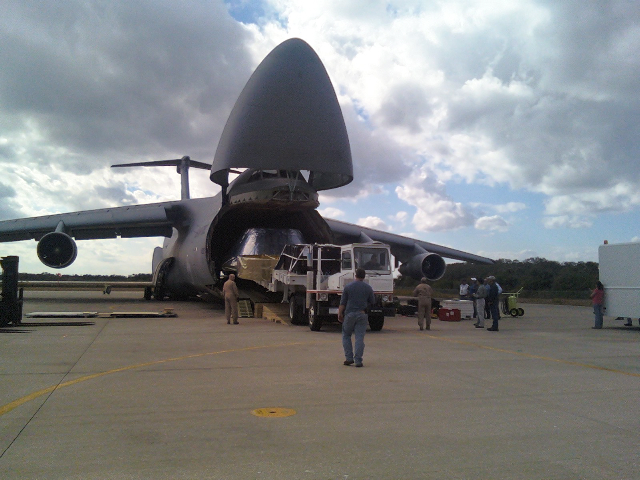 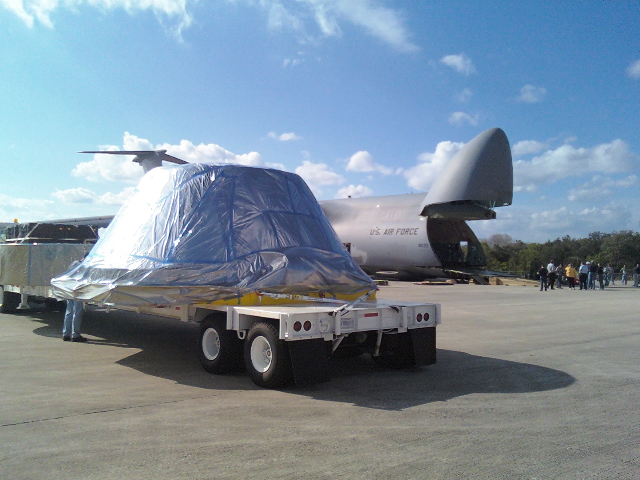 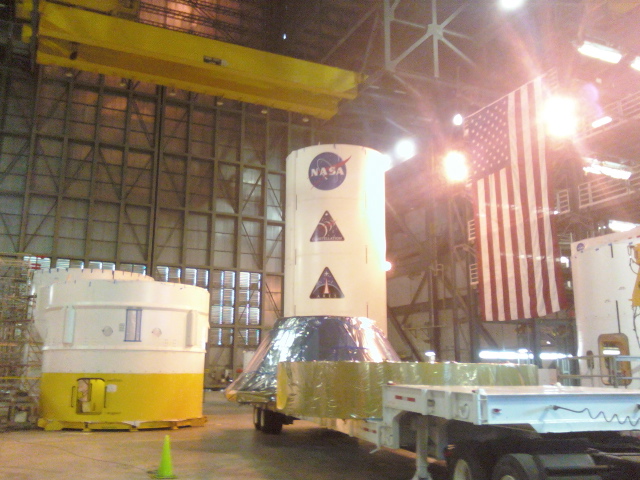 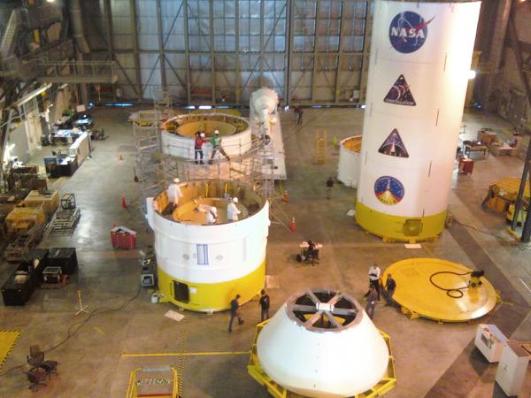 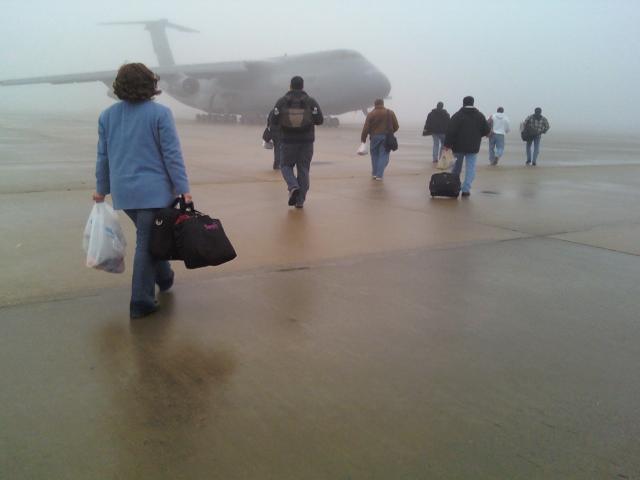 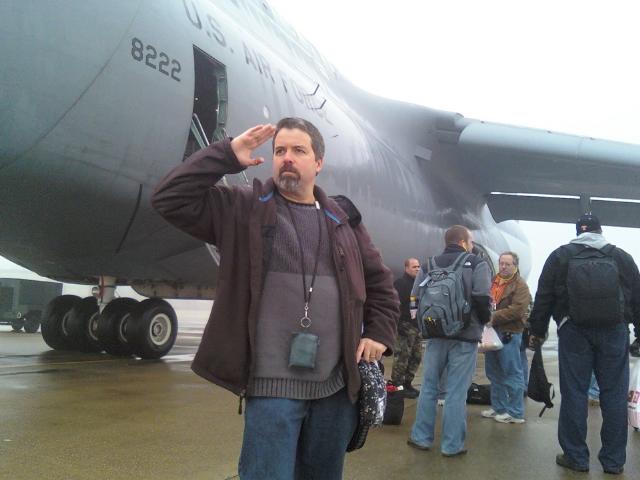 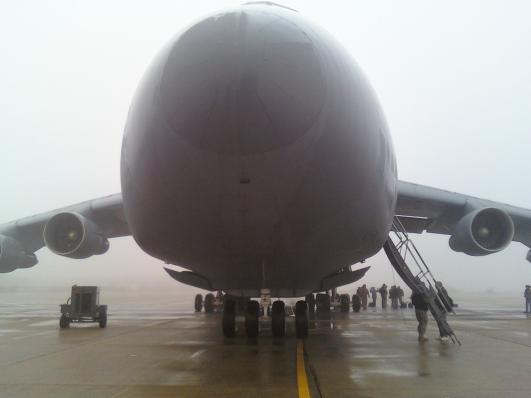