Ok, NASA EDGE didn’t win the Daytona, but we did win tons of fans with the inspirational presence of Astronaut Mike Good at the Daytona 500 yesterday.

While it is very cool to compare the technolgy of NASA and NASCAR, it is also awesome to see how fans respond to meeting a NASA Astronaut.  Everybody from Navy Seals to fans interested in string theory seemed to gravitate to the cool cat in the blue suit.  Mike even spent some time talking tires with folks in the pit.  Of course, he also spent a good bit of time signing autographs and answering questions from lots of curious fans.

I absolutely have to get a blue suit for the medianaut/co-host of NASA EDGE.

Time for one final autograph down on the track.  Credit: Blair Allen

All in all I think that NASA EDGE and the Astronauts for STS-125 make a pretty good team.  Hopefully, we will see more of them before and after their scheduled launch later this summer.

That’s all for now.

Chris talked to the fans about their knowledge of the Daytona 500 and NASA, and the excitement was amazing.  Everyone seemed to know a lot about both NASA and Daytona which led to lots of very cool conversations.  This should heat up tomorrow.  Astronaut Michael Good is going to be here to answer questions and sign autographs.  If I play my cards right, I may even be able to get some insider tips on what I need to do to go to space.

Here are a few photos of what we did today.

This fan on the right makes his 26th straight Daytona 500.  Credit: Don Morrison

Can you find the Co-Host in this picture?  Credit: Don Morrison

It was very cool to visit the pits during a race.  You wouldn’t believe the constant buzz of activity.  Each car’s pit felt like a miniture version of mission control during a launch.  Ok, so I haven’t been in the control room during a launch, but it is what I imagine it would be like.

We just arrived in Daytona long enough to stop by the NASA exhibit for the combined anniversaries for NASA and the Daytona 500.    It should be a very exciting weekend.  Tomorrow we are planning to talk to people in and around Daytona about NASA, and Sunday we are going to meet Astronaut Michael Good.  Hopefully I can get a quick interview about becoming the first medianaut between his busy Q & A schedule.

Important Note:  Unfortunately due to internal regulations we can’t accept posts that include a link to another website.  We apologize for the note but even NASA EDGE must follow the rules.

Let me start by saying congratulations to the Atlantis Crew of STS-122 for a successful launch.  The NASA EDGE Team watched it on NASA TV through the NASA Portal.   We never get tired of watching shuttle launches, even though Blair misses the shuttle dogs from the STS-118 launch.  He still claims they are fat free but that’s debatable.  I wonder if he ever passed his physical the week we returned from Kennedy. NASA EDGE Show 10 (or vodcast 10) is now ready for download.  On this episode we highlight the lunar architecture and the D-RATS crew.  I believe our Subject Matter Experts (SMEs – NASA jargon), Geoff Yoder and Pat Troutman, did a great job giving an overview of the architecture.  I am still a little ticked off that Pat joked my NASA EDGE shirt live on camera.  I just wished I could of thought of a good come back line within the 5 second limit.  Oh well.  We had a lot of fun talking to the guys and they are welcomed back anytime.

I think Frank Delgado was a little surprised when Franklin and Blair first asked him about the buyer incentive package for the SCOUT Rover.   I think the rover actually gets better gas mileage than Blair’s old 84 Corolla.  I can’t believe he actually drives that pink car to work everyday.  Maybe that’s why it’s hard for him to achieve insider status.

Anyway, we all had a great time hanging out with Frank, Joe Kosmo, Barbara Romig and the rest of the D-RATS.  They are paving the way for lunar exploration down the road.  Hopefully we’ll be invited back later this year and get a chance to change the Rover tire just like we did down in Daytona.  Should be fun.

Important Note:  Unfortunately due to Government regulations we can’t accept posts that include a link to another website.  We apologize for the note but even NASA EDGE must follow the rules.

NASA EDGE shoveled their way to Buttermilk Mountain through extreme conditions yesterday to talk to X athletes about the huge amount of support it takes to get them to an awesome competition like Winter X.  Just like the astronauts, Winter X athletes have thousands of people working behind the scenes to make their missions successful.  And we’re seeing it up close here at Winter X.

Here are some quick shots of our very cold day. 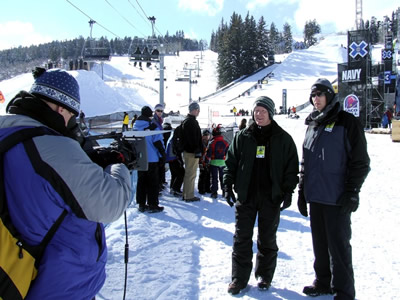 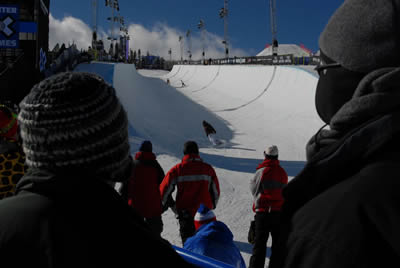 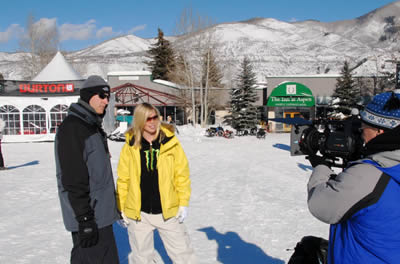 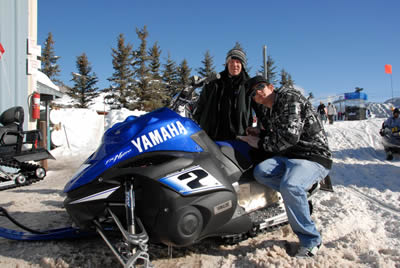 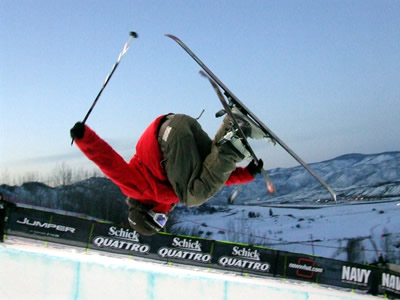 Up close and personal with an athlete in zero G.  Credit: Don Morrison

We’ll try and keep the pictures coming.  It was so cold that I had to soak my computer in a hot tub for two hours last night just to make this post.  I can’t complain.  This is great preparation for my future role in space.  It really isn’t that much colder on Mars.

NASA EDGE puts the M113 through its paces. 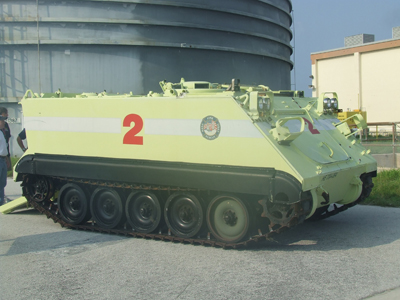 The M113.  Credit: Don Morrison, NASA EDGE
Chris and Blair become temporary pit crewmembers for NASA’s emergency egress vehicle down at Kennedy Space Center.  Load up into the M113 with NASA EDGE and Ken Miller (Space Gateway Support – SGS) as they talk about egress fashion etiquette, driver intelligence, and height requirements.  0-45 in 6.6 seconds never felt faster.  It’s a good thing the M113 has treads; otherwise Blair would cause the wheels to come off.  You can download this segment from the NASA EDGE website the first week in December.  We have to wait until NASA 5.0 comes on-line. 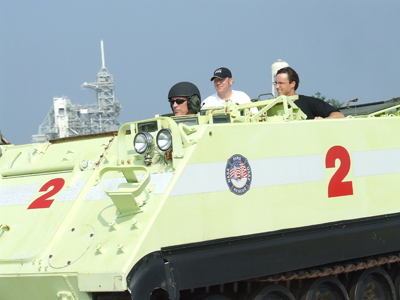 What an experience to ride in the M113 behind Pad 39B at NASA Kennedy Space Center. What started out as a tour ended up becoming an NE@ segment.  NASA EDGE would like to thank Sam Gutierrez, SGS Public Affairs and Government Relations Manager, Ken Miller, Battalion Chief for Cape Canaveral Spaceport, and Manny Virata, Public Affairs Officer – NASA Kennedy Space Center for making this experience happen.

Ditto to what the host said!  And to the Kennedy leadership…  If one of these cruisers ever goes into liquidation, NASA EDGE would like first dibs on the bidding.  Out and out buying one may be the only way I ever get to drive the M113.

I have to tell you that my “outsider” status is in serious jeopardy.  I’m going to meetings, hobnobbing with engineers and researchers, and basically becoming an Orion expert. Chris actually slipped up the other day and asked me a direct question about NASA’s return to the Moon.  The times, they are a changing.So, here are a few select shots from my daily Orion briefing that I thought you might enjoy.(Viewer note: I find these pictures even MORE interesting if you hum the theme from the “The Right Stuff” while viewing)
Engineers put the outer skin on the Pad Abort Version of the Orion. Credit: NASAIt takes a very steady hand.  Credit: NASA
The folks working on Orion are NASA EDGE Fans.  Credit: NASA
I wouldn’t believe if I didn’t see it with my own eyes.  Credit: NASA, Photoshop retouching: anonymous.More “Inside” information soon.The Co-Host 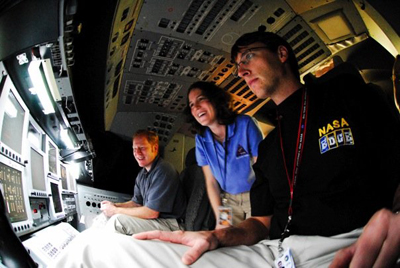 During 2008, NASA EDGE will be covering some very cool and exciting topics on exploration.  We also will be highlighting some major achievements during the past 50 years.  We would like to hear from you! Please post a comment on what you think are some of the most memorable NASA achievements over the past 50 years.  Feel free to share any funny stories on missions or projects.  We hope to get comments from the early days of NASA to the present.  Maybe one of your comments or stories will make a NASA EDGE show.

All the best,ChrisNASA EDGE Host

NASA EDGE has officially been around since March 19, 2007.  We’ve been to NASA Langley,  NASA Kennedy, NASA Johnson Space Center, NASA Glenn Research Center, and a number of states from California to North Carolina.  You’ve seen Chris, Blair, and Franklin take an inside and outside look at all things NASA.  But what about the NASA EDGE crew behind the scenes? 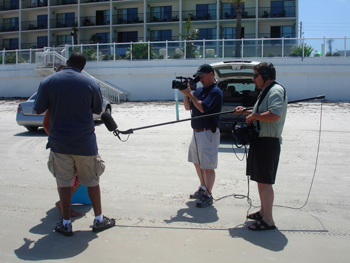 Franklin Fitzgerald (News Anchor), Ron Beard (Videographer), and Don Morrison (Systems Engineer) working on an ESA segment.  Credit: NASA EDGEThe show wouldn’t be possible without the experience and expertise of Ron Beard (Videographer, Editor, and Set Therapist) and Don Morrison (Systems Engineer). Ron is the glue that holds our team together.  When Blair, the Goofy Co-host, gets out of line in the studio or out on the road, we call on Ron to reel him back in.  Ron has been working at NASA Langley Research Center for a number of years.  He’s worked on NASA CONNECT and The NASA SciFiles, both Emmy Award winning programs.  He works his tail off to make sure we look decent on camera.Don Morrison, a systems engineer at NASA Langley, is our audio guru and anything else electrical.  Anytime we have a piece of equipment that is not working properly, he’s there to fix it.  He prefers not to use duct tape to make it work.So there’s the team.  Oh by the way, we’ve added a behind the scenes secret weapon to the team.  We’ll provide more info later.ChrisHost